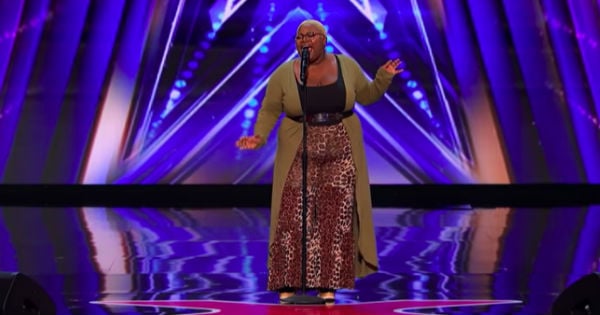 Simon Cowell stopped 12-year-old Ashley Marina twice during her America’s Got Talent audition. But when she came back and sang an original song, it blew everyone away.

Ashley Marina immediately won us over with her contagious personality and positivity. We even met Ashley's best friend, her adorable guinea pig who helps her with vocal warm-ups.

But when she stepped onto the America's Got Talent stage, things weren't so positive.

After belting out the lyrics to Martina McBride’s ‘Anyway,' I thought Ashley would easily move on to the next round. But before she had a chance to finish the song, judge Simon Cowell held up his hand to stop the song.

“I think you’ve got a good voice. It’s a good song, but not right for you, the first one.”

He asked Ashley Marina to perform her second song, without the backing track. So, this young talent sang Sia's hit song ‘Opportunity' completely a cappella.

Once again, Simon stopped the singer and offered her a chance to come back later with an entirely new song that showcased her vocals. While grateful for the opportunity, Ashley felt nervous about her song selection.

And that’s when she decided to take a big risk.

Rather than sing another artist’s song, Ashley Marina decided to sing from the heart. She performed an original song she wrote for her father titled ‘You’ll Always Be My Hero.' And this one was a definite hit with the audience and judges.

The 12-year-old even earned a thumbs-up from Simon after the performance!

YOU MAY ALSO LIKE: Elementary School Music Teacher Pens An Original Song For Kids And Its Hysterical Twist Has Folks Rolling

Now, Ashley will move on to the next round of competition where she will continue to compete for the title of America's top talent. Who else is rooting for this girl?