40-year-old mom Tia Vargas wanted to help Boomer. But they were at the top of a mountain and the dog couldn’t walk. So, she said a prayer, picked the pup up, and with the help of angels, carried the 55-pound injured dog down an 11,000-foot mountain!

Tia’s 17-year-old son is working to overcome substance problems and mental health issues. He’s getting help at a wellness camp in Arizona. The program encourages parents to participate in challenging activities as a way to help relate to the battle their child is fighting to overcome.

So, Tia, who lives in Idaho, decided to hike a nearby mountain.

“One of the things it said was to figure out how many miles you can walk and double it,” she said. “So I decided I was going to hike Table Rock.”

It’s a hike she and her family did each year. And Tia’s 76-year-old father decided to join her on the 7-mile trek.

While her dad walked the trail, Tia would push herself by running ahead some of the distance. She’d then double back to her dad.

"I did that about six times before my legs were done,” Tia said.

Exhausted, Tia settled into walking with her dad. They soon encountered a family with an injured dog struggling to limp along with them.

“He was limping so bad and a lot of times would just lay there and not want to move at all," Tia recalled.

The family asked Tia if it was her dog. They’d discovered Boomer on their way up the mountain and were trying to find his owners.

The group of hikers had little kids in tow, so Tia offered to take over with Boomer, allowing them to finish their hike. She hoisted the heavy dog up on her shoulders, fully expecting to find help sooner rather than later. 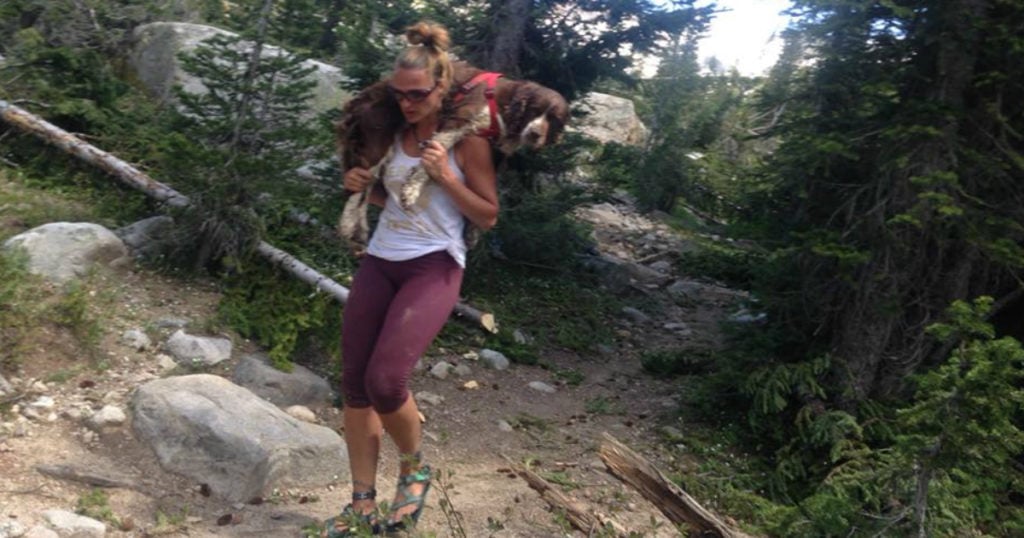 The exhausted mom trudged down the mountain to where her dad was and they began their descent. But as they continued on, it soon became clear the help would have to come from above!

After coming up the face of the mountain, Tia and her dad decided to take a different route down that wasn’t quite as steep — Huckleberry Trail. But they soon found it also wasn’t as heavily traveled. With no other hikers to lend a hand, Tia realized it was up to her alone to save the 55-pound injured dog.

After already pushing herself to the max, Tia was seriously struggling. And nothing seemed to be going right.

"Huckleberry had snow that we have to walk over and there were debris and branches everywhere," she recalled.

RELATED: An Abandoned Dog Was Caught In A Coyote Trap, But The Rescue Team Saved Her Leg

Sharp weeds scratched their legs, it started raining, and they got lost twice.

"There came a point where I was on the verge of tears thinking, ‘I have to get this dog off. I can't do this anymore,’ " Tia explained. "I had a headache, my neck hurt, my legs were in pain — I just didn't think I could go on."

A Prayer For Strength

For Tia, leaving Boomer behind wasn’t an option. She knew she needed to get him medical attention immediately.

“I realized that I had to buck up and do this. If I didn't get him off the mountain, I knew that he would die," Tia recalled. 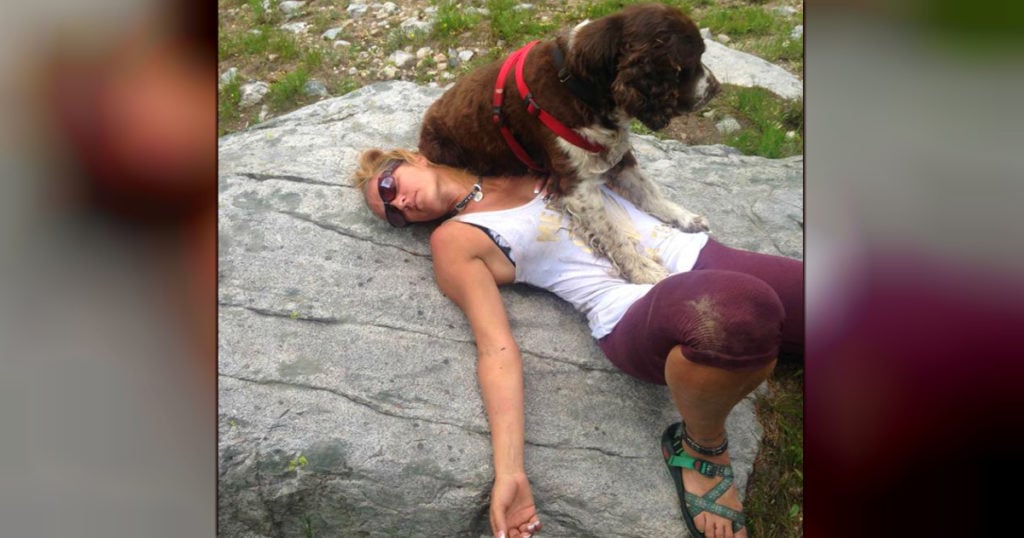 So, she cried out to Heaven for help.

"I said a prayer and literally felt that somebody walked up behind me and lifted the dog off my shoulders,” Tia says.

In fact, the relief was so instantaneous, she thought someone had literally removed the dog from her back. When she realized the 55-pound injured dog was, in fact, still there, she knew she was experiencing divine intervention.

“I felt that my ancestors or God sent me angels to help me carry that dog because it's like the weight was gone off my neck. I kept looking behind me to see who had lifted the dog up but he was still there," Tia said.

Hours after starting the rescue mission and thanks to the strength from above, Tia and her dad finally made it to their truck with Boomer. At the bottom of the mountain, they spotted a missing sign posted by the dog’s owners.

After contacting them, Tia finally had the full story. Apparently, Boomer and his owners had been out for a hike. Boomer wandered off a bit and that’s when disaster struck.

"He walked out onto a snow crevice, lost his footing and fell 100 feet before rolling 200 feet," Tia says.

Boomer’s worried owners searched and searched but couldn’t find the 55-pound injured dog. They posted a missing sign but feared the worst.

“They assumed he had climbed under a bush and died because there's no way he could have survived that. He's a miracle dog," Tia exclaimed. 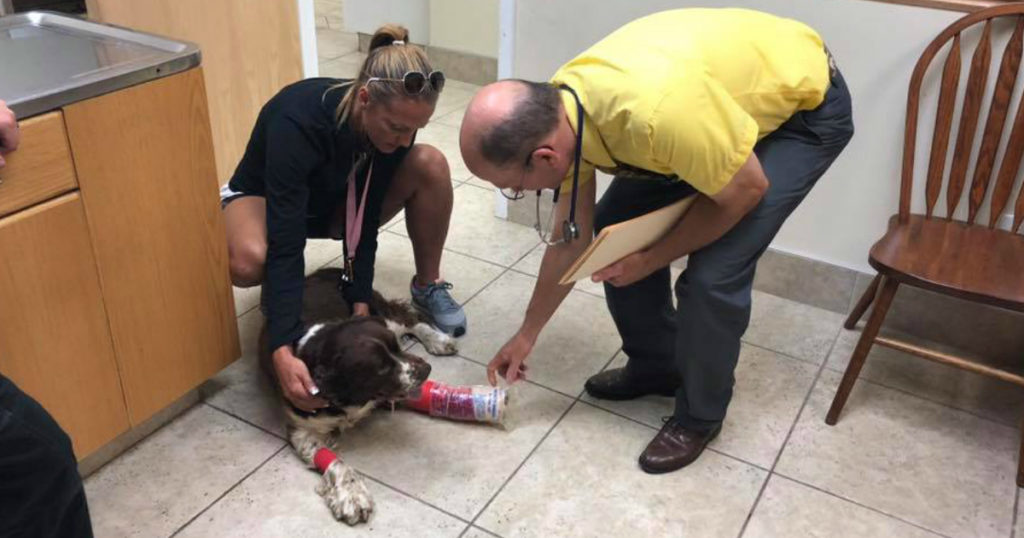 The very next day, Tia and Boomer’s paths crossed. And Tia knows it was no accident.

"I have no doubt that God put me there. There's no doubt in my mind. That dog would have died," she says. "I was fatigued, my legs were shaky and felt like Jello and there's no way I could have gotten him off that mountain without divine help."

Boomer’s owners were so glad to hear he was alive. Before the accident, they’d been planning to sell him to a man who needed a hunting dog. But after all Tia and Boomer had been through, they agreed to let Tia take him.

"Boomer is part of our family now," she said. "I feel like there's a reason why I was on the mountain at the very moment that he needed somebody to help. Both of us had a guardian angel that day."

Boomer suffered some torn ligaments. But after hearing his story, so many people have wanted to help. They’ve been sending donations and Tia is taking good care of her rescued fur-baby as he awaits surgery. 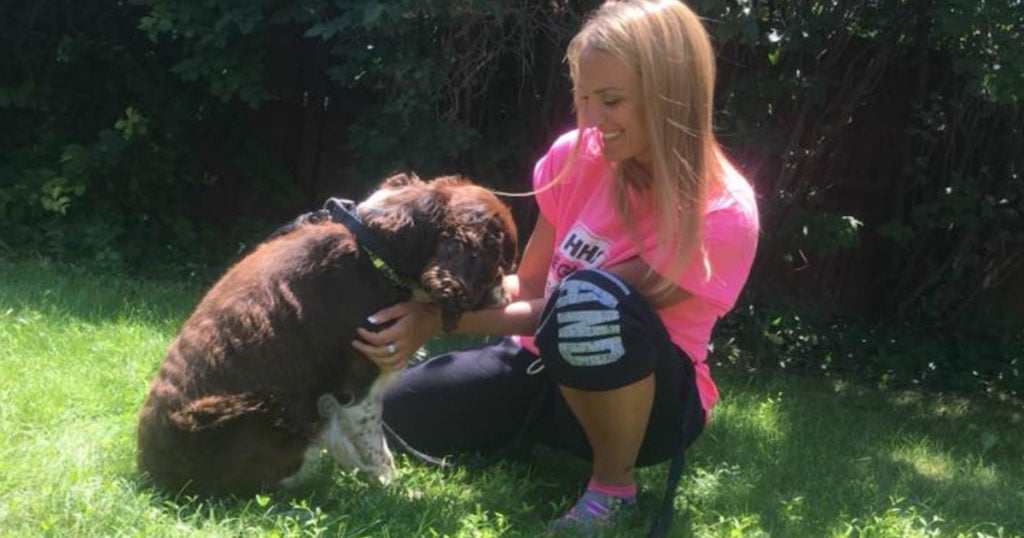 YOU MAY ALSO LIKE: This Homeless Dog Just Rescued Himself...And Stole My Heart Too!

God often works in mysterious ways. And Tia Vargas is certain He put her in the right place at the right time to save a life and expand her family!