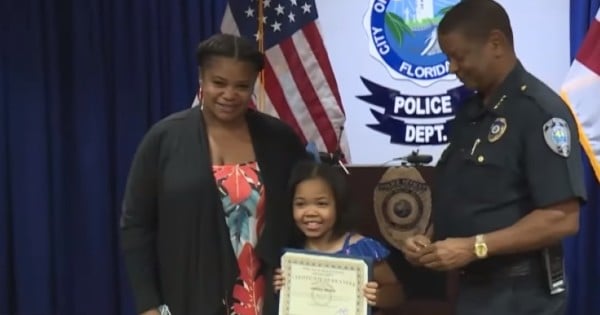 A 7-month-old baby was saved thanks to the quick thinking of a brave young woman. This story is just incredible!

This heroic fashion model sees a crash and then jumps into action when she hears mom screaming. Chief Stephen Mylett said, “It wasn’t just a life, it was one of the most precious lives in a community: a 7-month old baby," after the hero, Ladonya Williams, was presented with a civilian commendation.

Ladonya says she doesn't feel like a hero. She felt like she was in the right place at the right time and knew what to do because of a Red Cross first aid course she took when she was 18. God put this young lady in that moment because God knew she could save this 7-month-old baby.

Ladonya and her father were stopped at a red light when the pair saw a Grand Cherokee speed past them. The car then crashed into another car that was preparing to turn. Seconds later, a distressed mother exited from the car and began screaming for help because her baby wasn't breathing. The mother had been speeding to the hospital to get her baby help.

“I thought, ‘Oh my God, I don’t know what’s happening.’ She was screaming that her child was dying and that her baby was choking. Everything was just happening so fast," Ladonya said as she recalled the incident.

Right then, God's supernatural peace washed over Ladonya and she knew exactly how to save this 7-month-old baby.

Ladonya Williams calmly took the baby from the mom and turned the baby over and began to firmly pat his back in order to dislodge whatever was in his airway.

“I just wanted him to be okay and I wanted the mother not to lose her child. As soon as the woman said that her baby was choking, I knew that I knew what to do,” she said. “I was on my knee and I just had him [upside down] and I was just really patting his back really firmly,” she added.

RELATED: Man with Autism Who Saved Baby in Runaway Shopping Cart Has Best Reaction to Being a Hero

“I knew the baby was getting a little bit of air and I knew that the ambulance was coming and we were so close to the hospital so I flipped the baby over and I put my ear up against his chest just to make sure he was breathing and he was. So then I just held him on my chest and I just held his mother’s hand and we waited for the ambulance to come.”

What a miracle moment. It's incredible how God used this young woman to save the 7-month-old baby.

The mother of the child is incredibly blessed she had crashed where she did. Had Ladoyna not been there, who knows how this story may have turned out. God certainly has big plans for Ladonya. We pray the baby continues to grow and thrive and we thank God for Ladoyna.

“I was able to do something great and I knew, in that moment, that it was destined for me to be there,” Ladoyna said and we couldn't agree more.

YOU MAY ALSO LIKE: 10-Month-Old Was Choking on Pancakes Until a Stranger Stepped in and Brought Him Back to Life