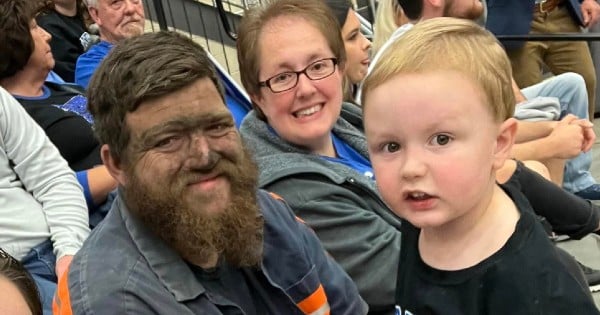 Jerry Lewis, a 94-year-old homeless veteran now has a forever home to call his own. But this story could've had a tragic ending had it not been for a couple who posted desperate plea for help after finding a homeless veteran in a Walmart parking lot.

The Russell family discovered Jerry homeless on Christmas Eve in 2020. They learned he had been homeless for 25 years. They also learned what an incredible man Jerry is.

Jerry served in the U.S. Army Air Corps from 1943 to 1946. But after the war ended, Jerry eventually found himself homeless and he floated from one place to the next for more than 25 years. Eventually he began living in his van. For more than two years, he had been living in a Walmart parking lot.

"In the vehicle was tough during the heat of the day, it is too hot. I used to park where the sun wasn't coming in the windshield and making it too hot. But at night after midnight, it really gets cold. I'd have to start the car and get it up and running but you can't run the whole tank," Jerry said.

But eventually he had to sell his van to make ends meet. But that's when the kindness of the Russells began to change Jerry's life.

RELATED: Homeless Veteran Saves Woman Stranded On The Road, Gets Huge ‘Thank You'

Brian and Angie Russell met Jerry on Christmas Eve. They supplied him with basic needs and that's when they got to know him a little more.

Soon they learned this sweet soldier had been living on the streets and the news certainly didn't sit well with the Russells. That night they took him home and began creating a plan for Jerry's future.

Brian created a crowdfunding page to help raise the funds needed to get Jerry a home of his own. He wrote, "Watching this proud man tear up over getting something as everyday as pajamas was heartbreaking." Brian added, "Please help us provide for the most deserving of us. A veteran, who protected our freedoms, who wants nothing more than a warm, safe place to live out his days."

Initially, the Russells were hoping to raise enough funds to pay for a year's worth at an assisted living center for the Vet and if they didn't get enough, they were prepared to modify their home for Jerry. But they were shocked and stunned from the community's response. Through the love, compassion, and generosity from the public, more than $46,000 was raised.

And now this precious man has a warm place to call his own until the good Lord calls him home.

YOU MAY ALSO LIKE: Strangers Help 79-Year-Old Veteran with New Mobility Scooter and His Reaction Is Priceless

"’For I know the plans I have for you,’ declares the Lord, ‘plans to prosper you and not to harm you, plans to give you a hope and a future. ‘" Jeremiah 29:11