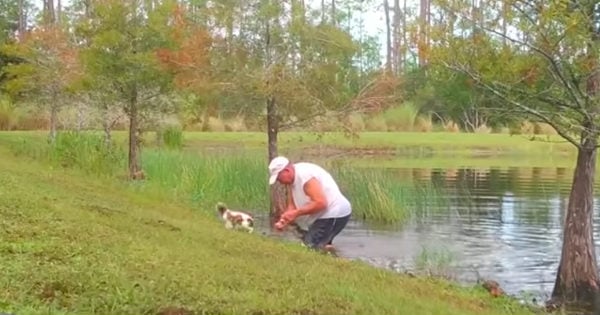 A chihuahua was going to be killed until actor Jean Claude Van Damme fought to save her! This is the kind of heartwarming news we can all use these days.

Jean-Claude Van Damme is a Hollywood star mostly known for his fight scenes and action movies. Not many people know about the actor's soft side.

RELATED: Cameras Caught The Intense Moment A Man Wrestles Alligator To Save His Puppy

Raya was a three-month-old puppy Chihuahua when Jean rescued her from euthanization. The reason for this was Raya was sold to new owners in Norway but officials would not register her because the only way she got to Norway was under a fake Bulgerian passport.

Because of European Union rules on transporting live animals, Raya was facing euthanization. That is when Jean-Claude came into the scene to save the pup's life.

Jean-Claude started a campaign, posting pictures of him hugging Raya. Belgium's food and safety authority eventually allowed Raya back to live with Jean-Claude.

"I beg, please, for my birthday, the food safety authority, change your decision." Jean-Claude said on his campaign on social media.

It is so heartwarming to see a man who is usually known for his skills in martial arts, hugging and loving a little puppy!

AWW 😍, I LOVE JEAN-CLAUDE VAN DAMME😉ONE OF THE BEST AND MOST FAVORITE ACTORS 💯👍💯 YOU’RE SO AWESOME, HE’S SO CUTE, HE’S GONNA MAKE A GOOD WATCH DOG, GOD BLESS YOU👑

Jean-Claude then said, "They made a mistake, the people who didn't do the paper correctly … But they cannot kill that little chihuahua."

Jean-Claude was right when he said that. Just because people didn't do the proper paperwork, doesn't mean that the defenseless puppy has to be killed because of someone else's negligence.

Yavor Gechev, a member of The Four Paws animal rights organization, said, "The export of pets from eastern to western and northern Europe is a lucrative business." Because of the dog’s fake passport, it meant that the dog would have had to be put down on October 20 according to Norway's legislation.

Jean-Claude has won everyone’s heart over by starting his campaign and fighting for the life of the three-month-old chihuahua.

Hollywood is full of stars who donate large amounts of money to animal shelters, although you rarely hear about celebrities fighting for one individual animal. But Jean-Claude did!

YOU MAY ALSO LIKE: The Planets Will Align Perfectly In 2020 To Catch A ‘Christmas Star' For First Time In 800 Years

Not all heroes wear capes and fly through the air. But some do martial arts. . . and hug puppies!