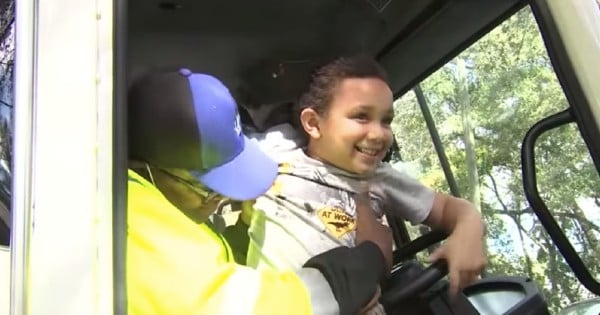 An Amazon delivery driver in the Austin area of Texas named Elisha Infante had anything but an ordinary day when she found a man in danger.

It was an unusual, cold January day in Texas. Part of the day's odd nature was the snow residents had recently received. Based in Austin, delivery driver Elisha Infante was driving a route for Amazon. She drove through Red Rock carefully navigating her route.

She commented, "I was a little nervous for the day because I’ve never driven in snow. Texans… we don’t really experience snow too much."

"So from this station, I had a 40-minute drive to Red Rock, and I actually made a few deliveries and it was pretty scary going over there because I did see two accidents even going on to that area.”

Elisha was driving down an empty and unfamiliar road when something surprising happened.

"And I was turning a corner and something told me, look to my right. And I don’t know what it was. I don’t know if it was a spirit, an angel, the guardian of some sort, or just intuition,” she said.

Elisha continued explaining, “I saw a man frantically waving his hands and he had a lot of blood on his hands, and I knew he was in a lot of trouble, and I stopped. I passed him because I couldn’t brake immediately, obviously, and I passed him. And I just kept thinking like, ‘Oh, my gosh, what am I going to do,’ you know? So I just reversed and I stopped and I knew it wasn’t good because I saw he didn’t have shoes on.”

She didn't know at the time, but that man was Senior U.S. Federal District Judge James Nowlin. The 83-year-old found himself on his ranch that day performing a chore. From there an accident happened.

Judge Nowlin shared, “Well, as a creature of habit, I normally on Sunday afternoon when I’m at the ranch, will take the trash can out and put it on the road outside the gate where the trash guy comes on Monday morning and picks up the trash.”

RELATED: Truck Driver Dad Spots A Frantic Father On The Side Of The Road And Stops To Help

The judge carefully put out the trash as he avoided the cattle guard, which was potentially slippery due to the snow.

“But apparently I put my left foot a little bit on the edge of one of those type bars of the cattle guard, which apparently was frozen or had ice on it.”

“And my left foot just slipped right out from under me and I came down pretty hard on the asphalt there in front of the cattle guard on my left hip, my left side.”

He fractured his femur and the injury rendered him immobile. Hope for him was not lost though.

With this wounded man before her, Amazon Deliver Driver Elisha pulled out her phone and called for help. While she waited, Elisha clothed him in an Amazon coat to help him stay warm. They made small-talk, but the man was suffering from the cold.

Thankfully, first-responders arrived and took care of the judge.

Later Judge Nowlin wanted to thank his guardian angel and found just the way to do so. He caught word that Elisha was not just an outstanding person, but a great employee who took the bus to work daily, while saving money for a car.

In response, the judge purchased her a brand new car as a token of gratitude.

He said, "You know, in this day and time, with all the problems they’ve got going on in this world, it is an indication that there are good people left in this world.”

For Amazon delivery driver Elisha, she knows she was just fulfilling God’s call.

“I know something, or somebody, put me there,” she said. “I know that — for a fact — because I know what I felt. And I know a lot of people don’t believe in faith or they don’t believe in stories like this, but it’s real.”

This story is a great reminder of the kindness people will share with those in need, even strangers. And Judge Nowlin shows us that there are still people in the world who feel a sense of gratitude for the love they receive.