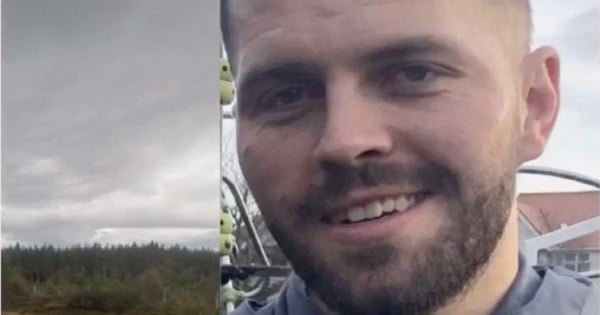 When an Amazon driver finds a baby on the side of the road, he doesn’t hesitate to act. And his quick-thinking safely reunited the child with his terrified mom.

Sometimes God puts just the right person in the right place, at the right time, to save a life. These guardian angels walk, or drive, among us. Amazon driver Juan Carlos Flores is one such person.

Juan Carlos was driving on his delivery route when he spied something unusual on the side of the road.

He saw what appeared to be a baby carrier, and he knew he had to investigate further. That's when the Amazon driver finds a baby inside the car seat!

Before that discovery, it had been just like any other morning for Juan. He still had several stops to make and he knew he was on a tight schedule to get packages delivered on time, but then he spotted the strangest thing sitting on the side of the road.

RELATED: Mom Hears An Odd Knock And Footsteps Running, Then Finds A Baby on the Porch

“When I saw that baby, I wanted to cry,” he said. He then went to the nearest neighbor’s house to ask if they had left their baby outside. The neighbors were absolutely shocked, just as much as Juan was.

Baby Ends Up On Side Of Road After Carjacking

The police suspected they knew what had happened. They had just responded to a call about a stolen car and kidnapping in that area at the same time.

Plus, a home surveillance camera captured a man leaving a baby in a newborn carrier on the side of the road less than a mile away.

Juan questioned, “How could someone have a heart to leave the child on the side of the road?”

Juan left the child safely in the care of the neighbor while he headed back out. The heroic Amazon driver saw the officers nearby and led them back to the house where the neighbor was caring for the baby.

Additional officers showed up on the scene nearly three minutes later and reunited the infant with the mother. Can you imagine what could have happened to the sweet baby boy had Juan not been working in that neighborhood that morning? The baby could've been hit by another car or kidnapped and no one would've been any wiser.

YOU MAY ALSO LIKE: Amazon Driver John Cassabria Follows ‘Alarming Noise' And Comes To The Rescue Just In Time

That day, Juan Carlos became a hero and a protector of the innocent. He was that baby boy's guardian angel dressed in an Amazon uniform.

"Rescue those who are being taken away to death; hold back those who are stumbling to the slaughter. If you say, "Behold, we did not know this," does not he who weighs the heart perceive it? Does not he who keeps watch over your soul know it, and will he not repay man according to his work?" Proverbs 24:11-12

WATCH: Amazon Driver Finds Baby Left On The Side Of Road During Carjacking