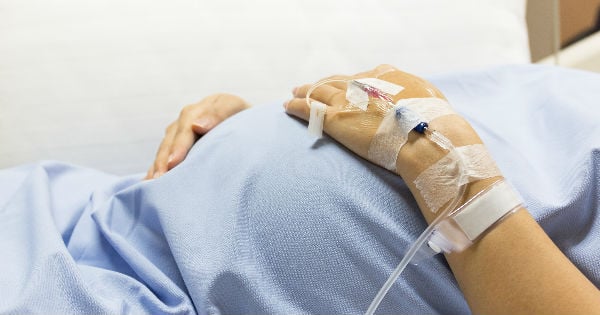 Adrianna and Micah Mashburn learned that they were about to have a baby with a birth defect. And when they were told that there was about a ten percent chance that their baby boy would survive, they knew they wanted to do everything in their power to give their child a fighting chance.

Their baby boy was diagnosed with Congenital Pulmonary Airway Malformation (CPAM). This is a rare congenital birth defect that includes a cystic mass of abnormal lung tissue.

RELATED: Mom Leaves Baby in Hospital And Nurse Lifts His Blanket to See No Arms or Legs

"They were telling us they didn't think he was going to make it," Adrianna said. "They told us to prepare ourselves for the worst. We were devastated – not knowing why this was happening or what our options were."

But the Mashburns were determined to stay hopeful. "I felt the baby moving around a whole lot. I said, ‘I really feel like he's a fighter,'" Adrianna shared.

After meeting with Dr. Darrell Cass, Director of Fetal Surgery and Director of the Fetal Care Center of the Cleveland Clinic, the couple learned about what would be the best option for their son. At 36 weeks, Adrianna went in for surgery. The surgery that would give her son a chance at life.

Baby With Birth Defect Gets Fighting Chance At Life

Dr. Cass performed a C-section on her and quickly brought the baby's head and chest out. The baby remained attached to the placenta during this part of the procedure. Then, Dr. Cass opened up the baby's chest and removed the 8 cm mass. It was about the size of a grapefruit! Then he took the 5-lb. 9-oz. baby to an operating table a few feet away and completed the procedure.

The surgery was a success! Adrianna and Micah named their new son Maverick and are so grateful for all that Dr. Cass did to save his life.

"He recovered perfectly," Dr. Cass said. “Maverick suffered no brain damage and no complications. He will be a healthy, normal kid.”

YOU MAY ALSO LIKE: Big Brother Sings ‘Count On Me' To His Baby Sister And It's The Most Precious Thing Ever

"We can't say thank you enough to Dr. Cass," Adrianna shared. "Every time we see him, we're thanking him. It feels like those words aren't enough for what he did for us. We're so grateful."