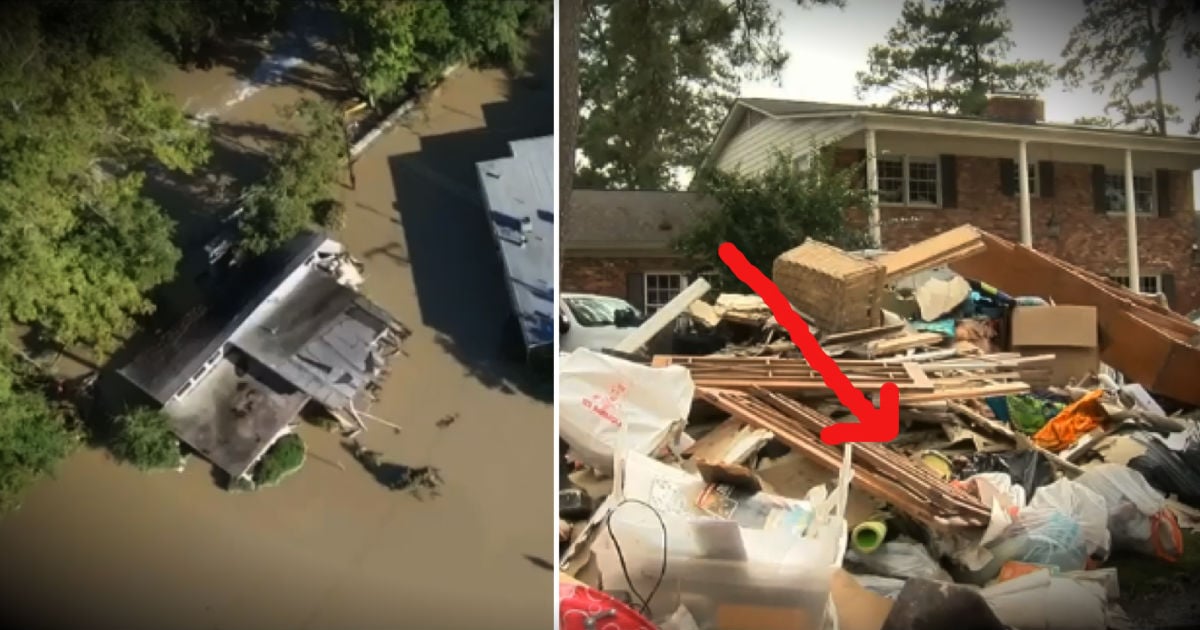 The Only 2 Things In Their Home To Survive The Flood Are What REALLY Matters!
Read Article »

You may have already read about little Abigail on our site before. She's already been through so much in the short time she's spent on this earth, and her parents have always called her a miracle. But the latest update has this precious nugget proving it time and time again!

The beginning of Erika's pregnancy with Abigail was filled with excitement. But then doctors broke the news that little Abigail would be born with Down Syndrome. It was a shock to her parents, Erika and Stephen, but certainly nothing these loving parents couldn't handle. They knew that they, and their 2-year-old daughter Audrey, would love Abigail no matter what.

But then the news got worse.

At the 26-week ultrasound, doctors found a mass in Abigail's brain. As they monitored this tumor, it only grew to be "massive" in size, and soon doctors were saying it was unlikely that this tiny baby would survive the pregnancy.

So, this faith filled family turned to God in prayer and decided that Abigail would have a meaningful life, no matter how short. Meanwhile, Abigail persevered, surprising everyone by being born alive and in good health, outside of the growth that was still present.

After her birth, doctors found that little Abigail's tumor had grown and was likely aggressive and cancerous. But sadly, the options were limited for someone so small. Due to her young age, chemotherapy would be deadly. Likewise, doctors feared that the delicate surgery needed to remove the tumor was too risky.

So, the little girl was sent home under hospice care with the expectation that her days were numbered. The family trusted that God was in control and decided they would cherish every second He gave them with this sweet child. They celebrated her birth with a newborn photo shoot, done by photographer Mary Huszcza of 808 Photography.

The beautiful photos from that shoot gained national attention, as did the fact that Abigail continued to thrive, despite all of the doctors' expectations. The brave and faithful way this family approached such a devastating diagnosis was truly inspiring and touched the hearts of many. And now, this sweet, little miracle is in the news again, and God's power and glory continue to shine through her!

For so long — since the 30 week ultrasound — doctors have been saying Abigail's life would be brief. As Erika points out, they were making the best judgements they could based on what little investigation they could do on the mass that was taking up residence inside little Abigail's head. But instead of taking a turn for the worse, as had so often been predicted by multiple doctors, Abigail just kept getting better. And that's when her family, still sending up prayers to God every day, decided to take her to the Children's Hospital in Boston.

At first, things were not looking good. In an update on the Abigail's Joy Facebook page, the doctors had found that the extremely large tumor was putting intense pressure on Abigail's brain. Additionally, the tumor was bleeding, which put her at risk of brain damage. More tests were needed to fully ascertain the situation, and all signs suggested her prognosis would be bleak. So, the family asked for lots and lots of prayer.

And God again showed just how powerful prayer is!

As the MRI from the hospital in Boston was compared to the MRI done at Abigail's birth, doctors were absolutely amazed. What was in the most recent MRI did not match what was in the original one.

While the tumor was still huge, the Boston doctors were seeing more brain and less tumor than had been there at birth, with less pressure on the brain than formerly seen. The neurosurgeon was cautiously optimistic that, instead of being the malignant, cancerous tumor as it had previously appeared, that there was a chance this may actually be a benign, low grade tumor masquerading as something far worse than it actually was.

The plan was to do a biopsy to confirm. If the tumor was malignant, then the risk of trying to remove it would be deemed greater than the benefit, just as it had been at Abigail's birth. However, if it was determined during the biopsy that the mass was in fact benign, it would radically change everything. And as we all know, when God shows up, radical change tends to take place!

Into The Operating Room

As family, friends and a dedicated Facebook following continued to pray, the Jones family sent their little miracle into the operating room. The neurosurgeon's plan was to attempt to remove as much of the tumor as possible if it was believed to be benign.

The family couldn't help but to feel anxious. But little Abigail had not grown tired of being called a miracle! They soon received word that the surgery was done and couldn't have gone better.

The tumor was NOT malignant, and the doctors had successfully removed all of it. And just like that — the family that had been told over and over to say goodbye to their darling baby, the family that had already planned her funeral, the family that had cried as they tenderly kissed the tiny fingers and toes that may not be there tomorrow — suddenly that same family was told their little girl would live!

Abigail has continued to impress doctors by just how well she's been recovering from the recent brain surgery. Just more proof that all of the prayers have been working! The family is headed back home, with their little miracle in tow and a whole new understanding of God's great grace.

And Abigail has her whole life ahead of her, with a God appointed purpose that has bolstered and renewed her family's faith every step of the way. As her mom, Erika says,

"The calling is there, I don't know what it is, but Abigail was spared for a significant reason. She is God's pebble and her ripples will extend deep."

Praise the Lord for this miraculous recovery!

And you can read about another miracle right here!