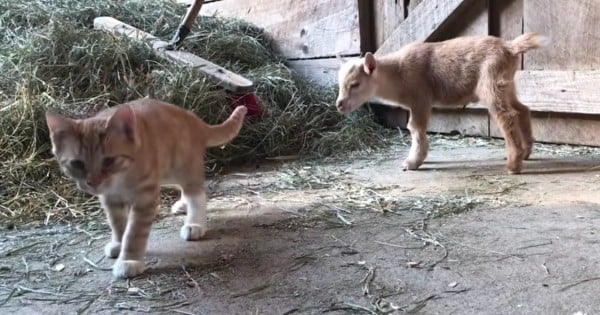 Bruce Willis the Cat looked like the saddest cat in the world while waiting in an animal shelter for adoption. But God led the right stranger to him and just wait until you see him now!

Bruce Willis the Cat found himself close to death last year when he was found as a stray. In the shelter, Bruce looked like a wreck. His eyes were barely open with tear stains under them. He got a bunch of shots and even had surgery. Sitting around all day, Bruce didn't seem to have an interest in doing anything.

RELATED: The ‘Saddest Cat On The Internet' Gets A Happy Ending

Everyone that saw him in the shelter would make comments about his sad eyes. But those sad eyes are what kept bringing Sandra back to visit him.

Sandra knew she couldn't adopt an animal because her landlord didn't allow pets. Since Bruce was already seven years old and had health complications, nobody wanted to adopt him. But Sandra couldn't leave him behind!

She asked her landlord to make an exception for Bruce. Luckily, she gave the go-ahead for Sandra to rescue Bruce. He didn't know it, but he was about to step into a whole new life!

For the one-year anniversary of Bruce's ‘gotcha day,' Sandra shared a video of Bruce's story on his very own social media accounts.

RELATED: Luhu May Appear To Be The Saddest Cat In The World But Looks Can Be Deceiving

She said, "So much has happened in our lives and in the world since then, and I'm so happy to have him by my side. Happy Gotcha Day, Brucie."

Apparently, his demeanor completely changed once Sandra took him to his forever home. Since he had so many health issues and lived most of his years as a stray, the transition didn't come easily. Sandra shared that she had questioned at certain points if she made the right decision but said she wouldn't change anything looking back.

Bless Sandra and her kind heart for saving Bruce from his miserable life and giving him the love he deserves!

YOU MAY ALSO LIKE: Scared Dog Too Afraid To Make Eye Contact Stared At Wall Until Love Transforms Him

“He that oppresses the poor reproaches his Maker: but he that honors him has mercy on the poor.” Proverbs 14:31

WATCH: The Inspiring Story Of Bruce Willis The Cat