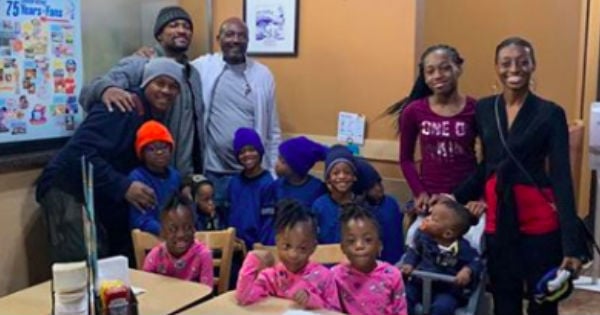 The title of the story just seems odd, doesn't it? Better yet, doesn't it sound like the punchline of a joke? But it wasn’t a joke to Jimmy MacDonald. Out on the water, his boat flipped, and the capsized kayaker was rescued by a boat filled with priests!

Jimmy was spending the day with his family when they decided kayaking would be a good family activity.

He was in his own kayak as his family sliced through the waters of Lake Gorge near Albany, New York. Jimmy says the trouble began when he was distracted with his new smartphone. He didn't know how to take pictures and soon his attention allowed him to drift far from his family. In one split moment, everything changed and he knew he was in trouble.

He fell into the water as his ill-fitting life jacket came up over his head while he was holding his $1,400 smartphone in one hand and the kayak in the other. As he struggled to keep his head above water, pride wouldn't let him scream for help as he watched other kayakers in the distance glide away.

Capsized Kayaker Rescued In Unique Way When He Feared Drowning

He then thought, "I might die today...this might be it.” Jimmy is a drug counselor and recovering addict who found the grace of God seven years ago. As he struggled in the water, Jimmy began to pray as fear for his life crept in. And salvation came from the most unlikely places.

A floating tiki bar full of priests and seminarians from the Paulist Fathers, a Catholic retreat, heard MacDonald’s cries. The captain of the Tiki Tours boat, Greg Barrett, recalled,

“I turned the boat toward him, I realized his life preserver had been in the upper portion of his head and he was, he was hanging on for dear life." He added, “I definitely believe it was a bit of a divine intervention.”

The irony was not lost on Jimmy. He was praying to God for help and it arrived in the form of a floating tiki bar full of priests. “How funny is it that I’ve been sober for seven years and I get saved by a tiki bar,” Jimmy said. Everyone involved in the rescue that day doesn't doubt for one second that God orchestrated the entire event.

YOU MAY ALSO LIKE: Inspiring True Story Of How Boy With A Fractured Skull Became World's ‘Fastest Human Calculator'

Jimmy compared the whole ordeal to his days of addiction. He said, “asking for help sooner would have been a good idea, instead of waiting ‘til it nearly cost me my life.”

God does work in mysterious ways and he certainly has a sense of humor.