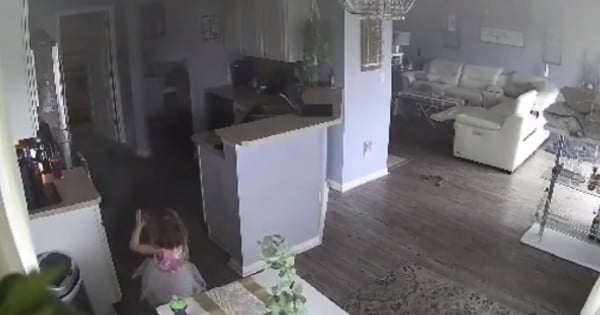 After a car crashed into a house and injured a little girl, one Good Samaritan's quick thinking saved her life.

On a recent afternoon in Salem, New Hampshire, a scary incident happened. A car came barreling through a home with children inside. The driver of the vehicle became trapped in his car, and a little girl inside the house was seriously injured.

RELATED: Quick-Thinking 4-Year-Old Sees Air Fryer Catch On Fire And Knows Just What To Do

“It was like a war zone,” said Scott Demers, who witnessed the crash firsthand. “It was chaos, everywhere.”

Scott was fixing sprinklers a few doors down when the car crash happened. He ended up rushing to the scene and jumped in to help as soon as he saw that Giuliana, the little five-year-old girl who lived there, was severely injured.

The car that crashed into the house took out a neighbor's mailbox post, which is what ended up striking Giuliana. Scott quickly took off his shirt and applied pressure to the little girl's neck.

Giuliana was then airlifted to a hospital in Boston where she underwent emergency surgery. The five-year-old has a broken jaw and several facial cuts, but she is expected to make a full recovery thanks to Scott's actions.

Joseph Tutrone, Giuliana's father, is extremely thankful to Scott and everyone else that helped his daughter during the crisis. “Really, they were the ones that saved her life, because I was in a complete panic,” he explained. “I didn’t know what to do.”

YOU MAY ALSO LIKE: Cab Driver Took Elderly Lady On 2 Hour Ride But Didn't Charge Her Once He Heard Her Story

The man who crashed into the house has now been arrested and charged with first-degree assault, aggravated driving while intoxicated, and reckless conduct with a deadly weapon.

LISTEN: Nurse Goes Quiet During Ultrasound As She Realizes Woman Got Pregnant While Pregnant | Wife Honors Her Greedy Husband's Dying Wish In The Best Way