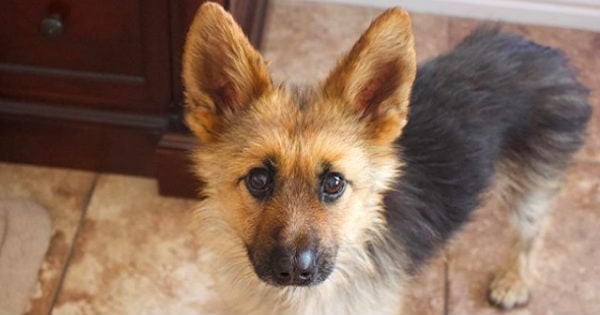 As kids, we all had toys that were our favorite that normally got a lot of wear and tear as we were growing up. For this little guy, it was no different. And when one of his toys became injured, the curious cat watched anxiously as grandma performed ‘surgery' on his favorite toy!

Lucas was a sweet kitten that received a lot of toys over the years, but he was only really attached to one. "I got the toy from my local zoo, along with a few other stuffed animals," Alana, Lucas' mom, explained.

"He usually leaves my stuffed animals alone, but he wouldn’t leave this one alone. As he grew up his attachment never went away." He just would go crazy for this one," Alana said. "I’d find it in all sorts of weird places all covered in cat spit."

Curious Cat Watches As His Grandma Fixes His Toy

"He’s had this toy for probably four years, and it ripped because of wear and tear," Alana said. "My grandma moved in with us last year, and really loves Lucas. [She] saw that his favorite toy was ripped, so she sewed it back together for him," Alana explained.

She then went on to add, "He watched the whole time. He was just super into what she was doing." Lucas stared at the needle and thread and watched grandma perform "surgery" on his friend. He sat there the entire time very patiently.

YOU MAY ALSO LIKE: Bindi Irwin Reveals Pregnancy With Heartwarming Photo And Asks For Prayers For Her Little One

When Lucas' human grandma was finally finished, she showed him his toy. Lucas was so happy! The cat's favorite toy was finally returned to him, and he was able to carry around the beloved toy and put it in weird places all over the house once again.

WATCH: Cat patiently Waits for Grandma to Perform ‘Surgery' On His Favorite Toy