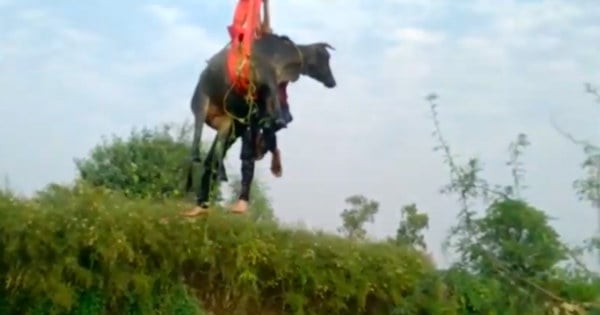 This cat with special needs fought all odds to survive and found the best home in the process.

Most people don't have lives where they face constant hardship like starvation or war or serious illness on a daily basis. Those who do and thrive in spite of their suffering are nothing short of miracles. This too applies to animals.

When animals suffer too greatly and hope seems to be lost, euthanization is sometimes the go-to resort. This happens especially after other options have been seemingly exhausted. The cat with special needs in this story, Jed, was blessed to avoid such a fate.

Despite a life full of hardships, Jed has finally entered into a more peaceful season of life — a season free of his previous sickness.

Jed's story started around the end of May 2020. The sickly kitten was brought to BluePearl Pet Hospital in Tampa, Florida.

At the hospital, veterinarian technician Alex Guida encountered a number of troubled animals and busied herself working to serve each of them. Jed was going to put her spirit of servitude to the test because of the magnitude of his special needs.

Some of the struggles Jed was undergoing included feline upper respiratory infection, a peg leg, and a bunch of fleas.

To treat the symptoms, Alex administered antibiotics, eye treatments, and nebulizations. While sleeping, Jed's breathing was very loud and throughout the day his appetite was very low.

Then Jed's condition became worse when he developed pneumonia. Then, in addition to being sick, he had to be isolated from other animals.

Sick and alone, Jed had no choice in dealing with his struggles (sounds much like the story of Job,) and would have naturally succumbed to a bad fate if not for Alex.

In time, Jed's condition did turn around. His eyes began to clear, breathing became better, and he gained weight from eating more. Only after a month was Jed allowed to come out of isolation and join her larger pets.

Later, other health issues did come about, resulting in Jed needing to be neutered and his bad leg amputated. Alex had restored Jed's health as best as it could be, but Jed still needed a home. That led to Alex making a remarkable decision – Jed would be permanently joining her own family.

Alex made her announcement online.

"Jed came as a Blue Pearl special on May 23. He was missing a foot, eyes were swollen shut, could barely breathe, and had lung sounds for almost a month. The nebulizer was our best friend for a while. He also underwent a leg amputation at the time of his *double cryptorchid* neuter due to his unknown injury that he came with."

"We're still working on his upper respiratory issues and eye issues (he's seeing a specialist in a couple weeks) but he's made so much progress from day one."

"We all know I have a soft spot for special needs and Jed will be staying in the Guida family and living at my parents' house. They absolutely fell in love with him during his journey and we couldn't be happier to add him to the fam."

May God bless Alex and the Guida family for the love and support shared with this animal.

While we may all venture into our seasons like Job, sick and alone, without the desired support of family and friends, God promises to always be there with us.

"Look at the birds of the air, for they neither sow nor reap nor gather into barns; yet your heavenly Father feeds them. Are you not of more value than they? Which of you by worrying can add one cubit to his stature?" (Matthew 6:26-27)