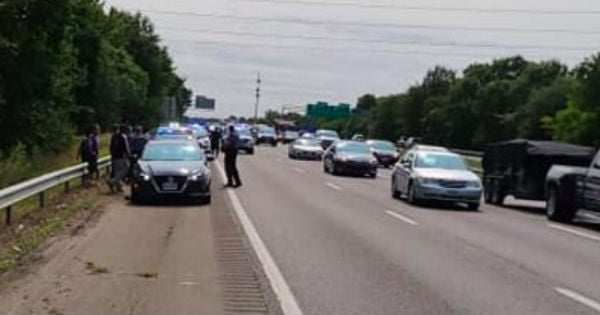 A heroic teen saves the day at a Chick-fil-A drive thru when he rescued a child that was choking in the backseat of an SUV.

Zack Kokenzie was recently working the Chick-fil-A drive thru in Columbus, Georgia when he heard frantic cries in the drive thru line. That's when he looked out the window and saw a father rushing to the back of his SUV. It appeared that there was a choking child in the back seat. The seatbelt had gotten wrapped around the child's windpipe.

Being that Zack is a trained Eagle Scout and CPR certified, he was prepared to jump in and offer assistance in any way. And that's exactly what he did! Zack jumped through the drive through window and went to the rear of the vehicle. Then he cut through the seatbelt with a pair of scissors, freeing the choking child.

Teen At Chick-Fil-A Drive Thru Rescues Child In Danger

"Zack and our team acted quickly in rescuing a child from a life-threatening situation," wrote Alex Vann, the store owner and operator of the Chick-fil-A on their store's Facebook page. "This could have been far worse. But Zack and others were in the right place, with the right training and the right attitude to potentially save the life of one of our customers. We are glad everyone is alright,"

YOU MAY ALSO LIKE: Grief-Stricken Mom Cautions Others After Trampoline Accident Leaves Daughter Paralyzed

Thank goodness for Zack's quick thinking and that the child that he rescued is now doing well! God definitely had Zack in the right place at the right time to save the day!

WATCH: Teen Hears Frantic Cries And Jumps Through Chick-Fil-A Drive-Thru Window to Save A Child