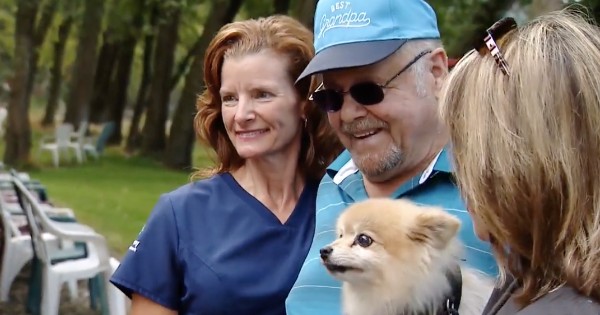 In his final moments, a dad cradled his daughter, 11-year-old Laney Perdue, as the plane they were on went down. And it’s believed Mike Perdue’s final efforts to protect his daughter are the reason she’s alive today.

A commuter plane traveling to Michigan’s Beaver Island crashed while landing at the airport. And while many of the details surrounding the accident remain a mystery, one thing is clear.

A brave father gave his all to protect his baby girl.

Mike Perdue, a father-of-four, and his 11-year-old daughter, Laney Perdue, were aboard the Beaver Island crash. Originally, Laney was scheduled to travel to the island alone to visit friends. However, Mike ended up choosing to ride along. And though the decision ultimately cost him his life, it spared his daughter’s.

There’s no way to know exactly what happened inside the plane in the moments the aircraft plummeted to the earth. But the last thing Laney remembers is how her dad cradled his daughter for the very last time.

“He cradled her in his arms,” Laney’s mom, Christie Perdue, explained. “She doesn’t remember anything, except for her daddy squeezing her so hard.”

It’s not hard to imagine that, as the realization of the impending crash sunk in, a father would reach out to hold his child. In part to say goodbye. But also, in an effort to protect her. And considering Laney Perdue is the sole survivor of the Beaver Island plane crash, it seems as if her dad’s life-saving attempt succeeded.

“It was a miracle and a tragedy, all in one day,” Mike’s widow, Christie, says. “It’s hard to balance all those emotions.”

Mike Perdue lost his life that day, as did the pilot and two other passengers. And Laney may have very well shared the same fate if her father had not served as a human shield.

Laney Perdue suffered multiple broken bones and injuries during the Beaver Island plane crash. However, all of her wounds are concentrated to one side of her body — the side opposite of where her dad was seated beside her. And this certainly supports the idea that the brave dad cradled his daughter and thereby saved her life.

“In my heart of hearts, I know that he truly did save her, and he protected her,” Christie Perdue said.

And loved ones don’t see the selflessness shown by Mike Perdue during the crash as anything out of the ordinary.

“He was just a beautiful human and loved his community, and he loved Beaver Island,” Christie explained. “I’m not surprised at all that he did that, that he sacrificed, and he was her hero.”

Now, Mike’s family begins the difficult task of moving on from the crash without him. And as Christie Perdue grieves the loss of her husband, she simultaneously revels in the joy of still having her daughter.

Laney Perdue is already back home. And this brave 11-year-old is leaving everyone in awe with her strength and resiliency.

“We’ve gone from no walking to a wheelchair to a walker and now to crutches. Her goal was to go home on crutches,” Christie explained. “She’s Laney, she’s great and she’s our miracle.”

Honoring Heroic Dad Who Cradled His Daughter In Crash

As the Perdue family navigates this difficult time, they’re leaning on the flood of support they’ve received.

“Our community has just surrounded us with love,” Christie Perdue said. “Laney’s getting letters from schools all over Michigan, letters from New York and Minnesota and we are just so grateful.”

In addition to the kind words of encouragement, a fundraising page has already exceeded $150,000 to help cover the family as they grieve the loss of Mike Perdue.

“He was just an amazing human being and we’ll spend the rest of our life just honoring his memory,” Christie said.

We know God is watching over them and will provide. He alone has the power to give this tragedy a greater purpose. And we have no doubt He has big plans for Laney Perdue!

"So you have sorrow now: but I will see you again, and your hearts will be glad, and no one will take away your joy." John 16:22