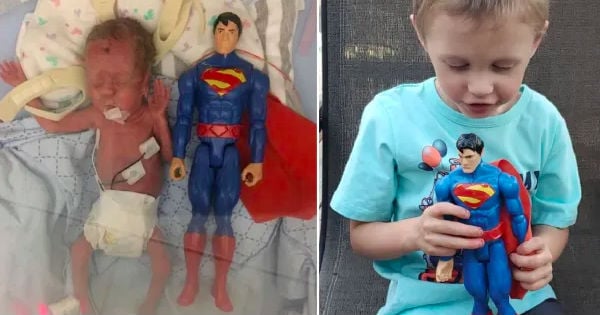 In Charleston, West Virginia, a man declared brain dead makes a miraculous recovery that no one saw coming.

Eric, age 36, could not have predicted what would befall him after he fell from the second story of an apartment. He landed on concrete, damaging the left side of his body.

RELATED: Man Amazed Doctors And Came Back From The Dead After His Heart Stopped For 45 Minutes

He underwent several surgeries to save his life. Though not everyone predicted the surgeries would be enough.

"After a couple days in the hospital, they had written me off completely," said Eric. "They said even if I made it out, I would be a vegetable. But they didn't agree I would make it out. So after a few days, because I'm an organ donor, they asked my family if they would be okay with harvesting my organs."

"I was literally about to have my organs harvested when I took a swing."

"I guess you can call it a flail, and with that much brain activity they couldn't harvest my organs. They said they would have to wait and see what would happen and it was the next day when I opened my eyes."

Eric's sudden sign of life was a shock to doctors, but also to loved ones. They had all started grieving, expecting a loss that seemed inevitable.

Thankfully, Eric was able to spend time with his family for Thanksgiving, even after being declared brain dead. That occurrence was something people like his mother were blessed to receive.

"My mom probably for the first week or two would come home and just cry," said Eric. "Because she thought that I was gone."

Declared Brain Dead, Dad Comes Back When No One Thought It Was Possible

While Eric survived the ordeal, he did not leave unscathed. All of his injuries will require more time to heal and some will never heal completely.

"I broke the orbital bone in my left eye but it didn't require surgery," he said. "But it still messes with my vision. I broke two bones in my ribs on this side, and I damaged my brain. My brain moved over eight millimeters inside my skull."

Eric witnessed a rare occurrence, seeing how people responded to the life he lived when they thought he would die. On Facebook, he read many posts from people who declared how much he impacted their lives.

Sadly, but normally, people don't tell you how they truly feel about you until the time is too late.

This story reminds us to honor one another as best we can while we can. And we can see too that no moment in life should be taken for granted. There are too many blessings God gives us that go unnoticed, waking up in the morning in our right mind, or a physically able body, having a job, having a family. These are blessings to thank God for daily.

Eric has definitely developed a newfound sense of gratitude in his life and is making plans for his future.

"I wanna go back to college and I wanna put my daughter through college. She's 13, so I have a few years for that. I wanna get my drivers license back, and I guess I just wanna live the American Dream."