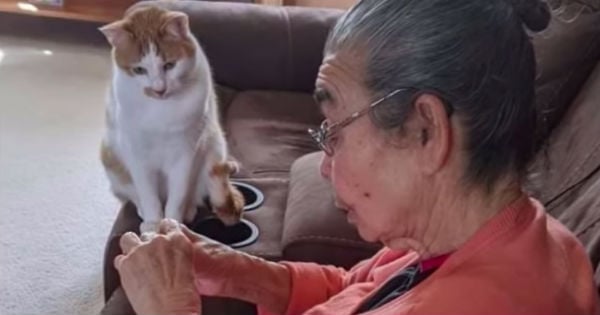 For us humans, sometimes we feel a little out of our comfort zone when we realize we're ‘different' from others. But for Bluenjy the adorable french bulldog, he is making the most of it, because this dog who eats like a human is getting so much loving attention online!

Bluenjy lives in St Louis, Missouri with his owners, Evan and Sunny. When the dog was born, he was born the smallest of his litter, and he was deaf. But this dog is far from ordinary. And through his differences, he's bringing lots of smiles and laughter!

This frenchie is a social media sensation, not only for being an adorable fur baby, but he also can do cute things. Like being able to hold things in his paws and eat like a tiny human!

Some of Bluenjy's favorite things to eat are: burritos, popsicles, and watermelon slices. Owners Evan and Sunny shared that even though he had some challenges at birth, he quickly discovered the special skills that came from it.

Dog Eats Like Human And Brings Smiles With His Videos

This french bulldog loves to put on a show in one of his many outfits, and he has a whole massive wardrobe full. The owners commented that as soon as they take a camera out of the closet, Bluenjy knows that it is time to shoot a video!

The frenchie's recent hit is him taking a Bruno Mars song and snoring along to it. Bluenjy's cuteness really has touched the hearts of many people around the world who are taking a break from their worries as they watch Bluenjy's videos.

He receives messages from people sharing how they are battling depression, fears, and disabilities, but that Bluenjy's joy brings light into their lives and puts a huge smile on their faces.

YOU MAY ALSO LIKE: Melissa Gilbert From ‘Little House On The Prairie' Reminisces About Her Time On The TV Classic

Bluenjy has more than 180,000 followers on his Instagram! This little guy took an unfortunate situation and is making the best of it! From his adorable way of eating or his best celebrity impressions, everyone loves Bluenjy! He continues to live happily with his two humans and bring smiles to thousands of people each day online.

h/t: Five On Your Side