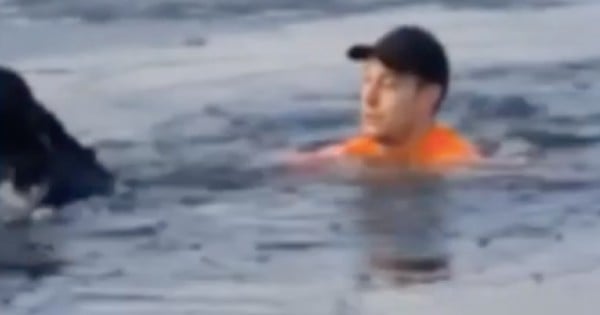 When his beloved dog keeps limping, Russell Jones worries something is wrong. But after spending several hundreds of dollars at the vet, he discovers the hilariously adorable reason for the dog’s “impairment.”

In a time where isolation is somewhat inevitable, people around the world are increasingly appreciative of the companionship we find in our four-legged friends. Whether they are doing something silly, playing, napping, or whatever it is your pets do, they never cease to bring a smile to our faces.

RELATED: Dog Interrupts A Soccer Game And Has A Happy Ending Waiting After He's Carried Off The Field

Take for instance this video showing a dog walking with a limp alongside his human who recently broke his ankle.

Breaking his ankle surely left Russell Jones less than thrilled. It meant spending a couple of months walking on crutches.

Regardless of his injury, Russell continued taking his pet greyhound, Billy, for walks around his neighborhood. This way, his pup didn’t miss out on his exercise.

Eventually, Russell became increasingly concerned when noticed his beloved dog was starting to walk with a limp himself, keeping his front left paw from touching the ground as he walked.

RELATED: Smart Dog Uses Doorbell To Get Back Inside After Escaping In The Middle Of The Night

Because of this sudden limp, Russell decided to take his Billy to the veterinarian to find out what was causing him to keep the pressure off his front paw. After the vet visit, which included a $410 X-ray scan, the veterinarians found nothing wrong with the dog’s paw.

The perplexed owner returned home with a big vet bill and no answers.

Then one day, Russell saw Billy playing in the backyard. The pup was running full-speed with no visible limp at all. It was at that moment he realized what was causing the dog's limp.

The dog was only limping when he was around the injured Russell. The sweet pup was doing it out of empathy! It relieved Russell to know his dog was healthy. But he stood amazed at the lengths his pet would go to show he cared for his human!

In a 2018 study conducted at Johns Hopkins University, researchers concluded that dogs are prosocial and empathetic in behavior, meaning they want to help us and make us happy by nature. The study states many dogs show empathy if their owner is in distress and will also try and rescue them if the situation may arise.

Although this is all good news for the recovering Russell, I’m sure he would have liked to know all that before he spent $410 on Billy's X-rays.

YOU MAY ALSO LIKE: Little Girl And Her Husky Pal Share A Language All Their Own And It's Too Cute To Miss