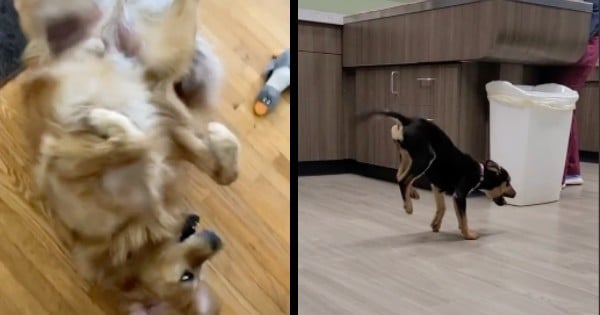 Someone had a camera out at the perfect moment to catch this dog kissing a dolphin. Lucky for us, that picture went viral and spread some happiness. You would never guess that a dog and dolphin would be buddies!

What's cuter than a dog kissing a dolphin? That SAME dog meeting the dolphin when it was just a puppy. This duo now has a picture from ‘then' AND ‘now!'

RELATED: Golden Retriever Takes A Trip To The Aquarium And Becomes Best Friends With A Dolphin

Gunner got to go where no Golden Retriever has ever gone before — the Dolphin Research Center in the Florida Keys. His owner, Marie Blanton, is a long-time trainer at the nonprofit and decided to bring Gunner along when he was just eight weeks old.

Even though a lot of pups might be nervous in that situation, Marie said Gunner was "calm and curious." She also said that Delta, who was a spunky four-year-old at the time, was very interested in Gunner.

Ever since the two met, Marie has brought Gunner into work fairly regularly. These cuties built their friendship just like us humans do!

RELATED: An Abandoned Baby Otter Made Some Unlikely Friends And The Story Behind Is So Touching

The picture of a dog kissing a dolphin that went viral shows a seven-year-old Gunner licking a 10-year old Delta. The Dolphin Research Center actually live-streamed their reunion on the organization's Facebook page. I can't think of a better way to spend an afternoon than to watch. these buddies hang out!

Once the Dolphin Research Center realized the world had fallen in love with Gunner and Delta, the organization posted the perfect picture for ‘throwback Thursday.'

In the Facebook post, the Dolphin Research Center placed a picture of the pair from their first meeting right next to their most recent photo. They included the ages for the dog and dolphin friends below the pictures to show what a strong friendship they have!

I think we could all learn a thing or two from Gunner and Delta! We should love all of God's children, no matter how different they look or where they came from.

YOU MAY ALSO LIKE: 2 Beluga Whales Get Rescued And You Can See Just How Much It Means To Them

“This is my commandment, That you love one another, as I have loved you. Greater love has no man than this, that a man lay down his life for his friends.” John 15:12-13