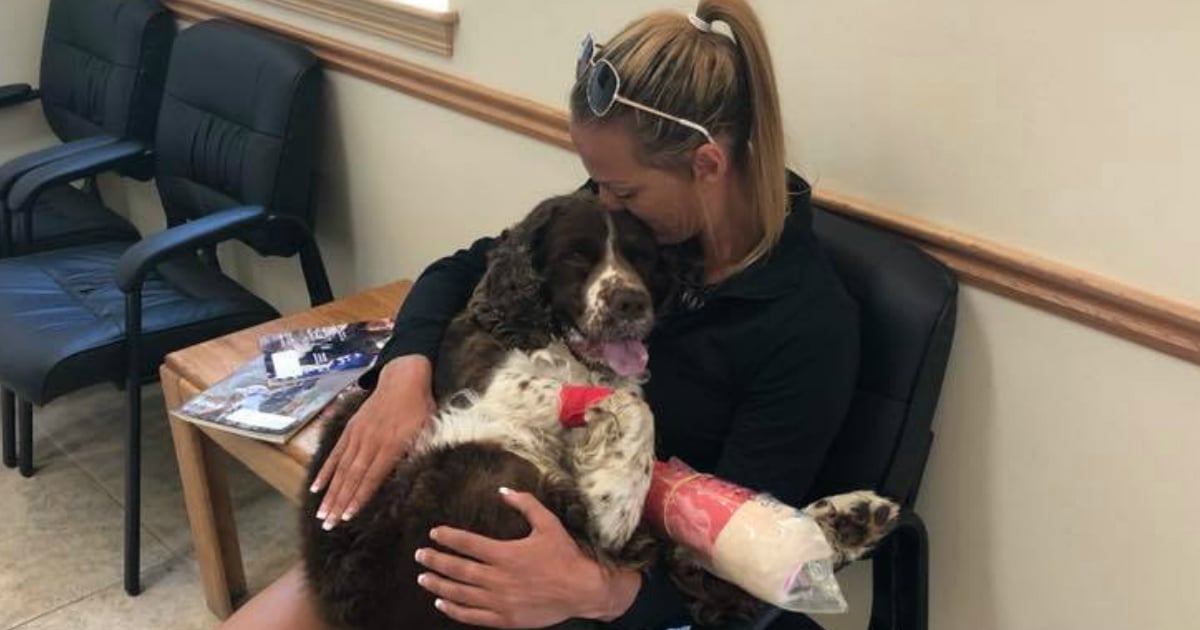 American Indycar driver Ryan Hunter-Reay had an extremely close call. Just moments after narrowly escaping a multicar wreck, the race car driver’s son found a guardian angel medallion in his pocket. And the little boy had absolutely no explanation for how it got there!

Accidents are bound to happen in a sport where the cars regularly travel faster than 200 miles-per-hour. Just one wrong move can prove deadly.

On Sunday, August 19, 2018, a terrifying crash took place at the ABC Supply 500 race at Pocono Raceway. At the start of the race, IndyCar rookie Robert Wickens attempted to pass Ryan Hunter-Reay on the first lap. But things didn’t go smoothly.

As the two cars touched, both vehicles crashed into the wall, which sent Robert’s race car flying into the air over top Ryan’s. Robert’s airborne car just narrowly missed hitting Ryan’s. In fact, there was heavy damage to the roll hoop directly behind his head.

BRUTAL CRASH!!! Wickens crash in slow motion… 😥😥😥 Robert Wickens is awake and alert. He has been transported by helicopter to Lehigh Valley Hospital-Cedar Crest. #Indycar#Pocono pic.twitter.com/ttoTSGlW35

But miraculously, Ryan walked away unscathed.

“I was lucky to get out of that one," he said immediately following the wreck, after being released from the infield medical center. “I was pretty shocked I got hit in the back. That is neither here nor there right now. We're just thinking about Robert.”

But Ryan’s 5-year-old son would soon reveal luck had absolutely nothing to do with it!

Ryan’s wife, Beccy, and 5-year-old son, Ryden, were watching the race when the crash occurred. And Beccy later revealed that just moments after Ryan’s wreck, Ryden handed her a medallion with a significant message from above.

RELATED: God Sends A Little Girl At Death's Door An Angel And A Miracle

The driver’s son found a guardian angel medallion inside his pocket. And when Beccy asked him where it came from, Ryden had no idea.

"I don't know mommy, it was just in my pocket," he explained.

Ryden came up to me after the crash & handed me this Guardian Angel. I asked him where he got it & his reply, "I don't know mommy, it was just in my pocket." 🙌🏼🙏🏼 pic.twitter.com/Wb5hqKHuQo

The timing of the mysterious find was too perfect to be a coincidence. And when Ryan heard about it, he, too, knew it had a special meaning.

"She [Beccy] asked him where he got it, and every time he said, ‘I don't know,’" Ryan Hunter-Reay said. "I even asked him after I got home. He said, ‘I don't know, Daddy, it was just in my pocket.' It sends chills down my back just thinking about it. For sure, guardian angels were looking out for Robbie and myself, and we still need that guardian angel looking out for Robbie."

And of course, God had plenty of angels on the track, too.

"The safety team and medical staff are our absolute guardian angels at every track we go to," Ryan explained. "We're so fortunate to have them at each and every event. The consistency and professionalism involved is something I can't (properly) express my appreciation for. I've known a lot of these people for a long time, and all of them really care about us and our well-being. This is a very special group that works with a very dangerous sport. At any moment, the tide can turn, but we know they'll be there for us."

Praying For Healing For Indycar Driver

Aside from Robert Wickens, all of the drivers involved in the crash walked away relatively unharmed.

As for Robert, it took safety crews about 12 minutes to get him out of his car. A helicopter then took him to the hospital. Meanwhile, everyone lifted him up in prayer.

🇺🇸Thanks to everyone for the messages. Thank god I am fine and walking away from that accident. Praying for you @robertwickens , I hope you're ok… 🙏🏼🇧🇷 Obrigados a todos pelas mensagens. Graças a Deus eu estou bem e nada aconteceu comigo. Rezando pelo Rob… 🙏🏼 @IndyCar

Praying for a speedy recovery for @robertwickens & strength for @itsKarliWoods by his side. 🙏🏼

Race Overshadowed By Concern For Driver

Alexander Rossi went on to win the race, but offered up his prayers for Robert as well, explaining the victory was “tough to really celebrate after what happened.”

IndyCar was not my first racing family. But Rob has been a part of my life for many years & now we're in this family together. Hard to celebrate this win when his well-being is priority. From my crew & NAPA family, sending our prayers to Rob, Karli, his family & our friends atSPM pic.twitter.com/fpkdKYENsq

Likewise, Ryan was thankful for his safe passage during the crash but also worried sick for his fellow driver.

"The focus is and always has been on Robbie and his recovery," Ryan Hunter-Reay said. "I haven't been sleeping. I'm on edge, pacing, waiting for every bit of information and detail. It's a tough time for him and his family. Since my car came to a stop, the only thing that has consumed me is his well-being. I wish there was more that we could all do. We're just waiting. It's in the hand of those guardian angels now."

Since then, it’s reported that Robert is awake, alert, and speaking to his family. He still has a long road to recovery but all reports have been positive. He’s now even breathing without medical assistance, praise the Lord!

Faith Is The Key

As Indycar driver Ryan Hunter-Reay pointed out when he applauded the quick-acting safety crew and medical staff, God’s angels are all around us. Perhaps that’s why so many folks in the racing community trust in our Heavenly Father.

In a sport where danger waits around every corner, many Indycar racers lean heavily on their faith. In fact, racing stars like Scott Sharp dedicate plenty of time to prayer before stepping onto the track.

“There are lots of challenges in racing that test one’s faith,” Scott says. “Whether it’s risks on the track, the politics off the track, or job security issues, I find myself really leaning hard on my relationship with God.”

Faith plays such a huge role there is even an Indycar Ministry, working toward the mission of “bringing Christ’s love to the track.” The group helps provide prayer, counseling, church services, and support to the racing community.

And so, the guardian angel medallion little Ryden mysteriously pulled from his pocket is a powerful reminder of Hebrews 13:2 for us all:

YOU MAY ALSO LIKE: Photo Shows Angel At Scene Of Horrible Crash