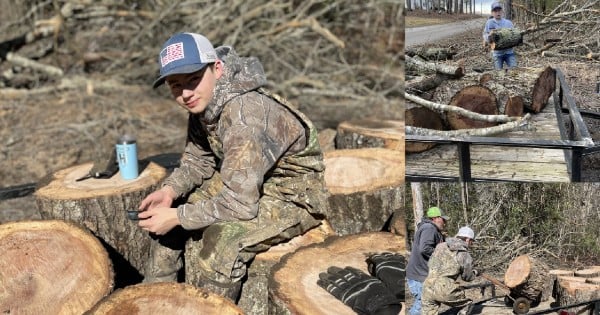 Teen Chopped Firewood in Ice Storm, Then Realized Neighbors Were Without Power Too
Read Article »

After one couple dropped an engagement ring in the water, they turned to Facebook in a desperate attempt to find it.

Brian Quercia proposed to his girlfriend, Anna Davis, in February at North Beach in Tybee Island, Georgia. He had the ring picked out and the perfect plan of how he wanted to ask her. But what he didn't see happening was losing the ring in the water!

Once Brian got down on one knee, he popped the question and Anna said yes! But when he went to place the ring on her finger, Brian noticed that the ring was no longer in the ring box. And it was nowhere to be seen.

"At first I kind of didn't believe him," shared Anna when she thought that Brian was playing a practical joke on her. "I had only seen it for a couple of seconds."

In a desperate attempt to find the missing ring, Brian and Anna went on a Tybee Island Facebook page and asked the online community for help. Thankfully, a stranger online was able to locate the ring the next day after just searching for about 20 minutes in the area of the proposal. He then returned the ring to the couple. They were incredibly grateful and could breathe a sigh of relief that the engagement ring was no longer missing!

YOU MAY ALSO LIKE: Young Man with Autism Asks ‘Take a Chance on Me' in Handwritten Cover Letter And It Goes Viral

Now with the ring drama behind them, the couple is looking at wedding venues in Savannah, Georgia to tie the knot where they first met.

UPDATE!!!!! Thanks to so many sweet people who went and searched for my ring. Sweet Mr. Foy here found my ring within 20…