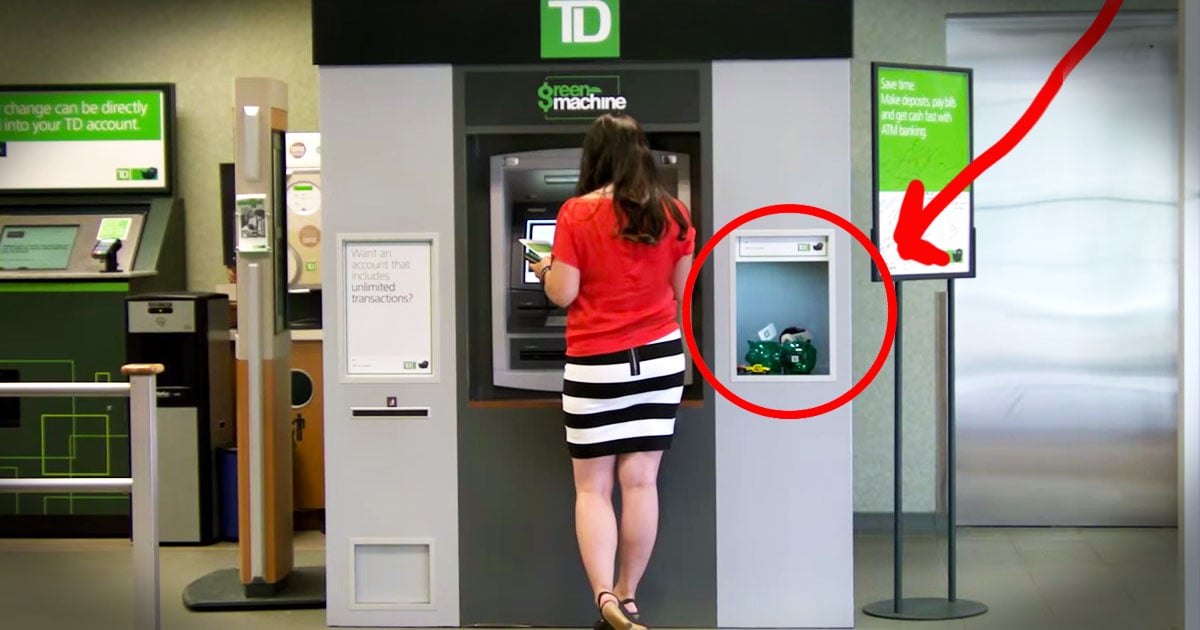 ATM Machine That Specializes in Acts of Kindness
Read Article »

‘The Rock’ Is A Tough Guy With A Heart Of Gold

Clearly Dwayne Johnson, aka “The Rock,” can easily play the tough guy. But if you catch him off-screen, you’re more likely to see him showing his softer side. And what he just did to bring joy to a group of sick kids is proof that his massive muscles aren’t nearly as big as his heart! 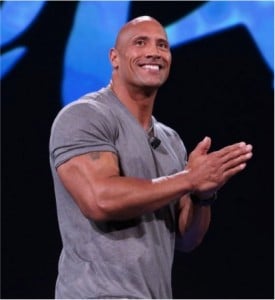 Dwayne, who got his start as a WWE wrestler called “The Rock,” has since transitioned into a successful movie career. But despite his success, the star has always managed to remain very down-to-earth. Case in point — while recently in Georgia filming for his newest movie, Baywatch, the star decided that rather than heading back to his trailer between takes, he’d make an impromptu visit to the children’s ward at Memorial University Medical Center.

I surprised the children at Savannah’s Pediatric Specialty Ward aaaaand look at the concentration on lil’ Aiden’s face!👍🏾. We shot #BAYWATCH scenes at Memorial Health Hospital and thought I’d pop up to the ward. Awesome experience and THANK YOU to all the hard working and caring staff who helped make this visit possible. To all the kids I met – you guys keep smiling and staying strong. All the mamas and daddy’s I met, y’all stay strong too. Gotta tell ya little stuff like this will always be the best part of fame. And good Lord I wish I had Aiden’s concentration when I was in my high school math classes. I wouldn’t have failed Algebra twice. 😂👏🏾👍🏾💯

He describes the experience as being “the best part of fame.” And the unexpected rendezvous from the celeb was a complete delight for everyone involved — from nurses, to parents, to the brave, little warriors themselves. It was just what these special kids needed — a day filled with excitement, smiles, laughter and even great, big bear hugs!

When I surprised Maleak at the Pediatric Specialty Ward in Savannah, he ran into my arms and gave me a huge hug. Now I’m not just talkin’ about any kind of hug… this boy gave me a BEAR HUG. He’s already stronger than I’ll ever be, but physically he gave me the hug of all hugs. Trust me, I’m a hugger so I know. 😂 So good to spend some time with Maleak and his mama. Talked about everything from my movies, wrestling to how important it is that he eat all of his food. Let’s get that appetite up buddy. I say it often and its true. I’m a lucky lucky dude to be able to do what I do and reactions and meetings like this one with Maleak will always be the best part of fame. You stay strong big man. Keep that smile on your face, keep giving out those bear hugs and make sure you’re eatin’ all your food! All of it;) 💯👊🏾💪🏾 Your bud ~ DJ

Oh, but it doesn’t end there! When “The Rock” learned that one of his biggest fans missed out on the experience, he made sure to remedy the situation right away.

One of the patients, Christopher, was too old for the children’s ward. And since his room was in the main hospital rather than the pediatric ward, he didn’t get to join in all the hullabaloo. But once Dwayne found out, he put the movie production on hold and headed back to pay a special visit. It was a wonderful moment for Christopher and an answered prayer for Christopher’s mom, who tearfully told her son, “Christopher I can’t give you anything, but I’m so happy I could give you this today…”

So I called an audible and went to visit Christopher. Glad we did… While I was visiting the Pediatric Specialty Ward surprising the kids, I got word from my team that there was a mom who was pleading with our production staff, that I go upstairs to her son’s room to give him a much needed big surprise. Since he’s older he’s in the main hospital and not in pediatric care. We were shooting #BAYWATCH scenes outside of the hospital, but instead of heading back to shoot I called the audible, put production on hold and went upstairs to see this young man. I walked in and his smile lit up the room! And I mean lit that room up!;) We talked for a while about his family, his school and how hard he’s working to eventually graduate AND we talked about how COOL all his scars are from his multiple surgeries – from his head to his chest – those scars are badges of honor and the reminder of how beyond tough this kid is. Right before I left his mom looked at him and said, “Christopher I can’t give you anything, but I’m so happy I could give you this today…” and she started to breakdown, which was captured in this pic. Made me think to give so much credit to these parents who would do anything to take their kid’s pain away and ANYTHING to bring a smile to their faces. As a papa bear I understand. Glad this mom brought a smile to Christopher’s face. And glad I got a chance to shake the hand of this very strong and inspiring young man. Stay strong Christopher and show them scars with pride. You’re the man! ~ DJ

Dwayne also made another fan’s dream come true when he extended the invitation for 7-year-old Gabriel “Tater” Singleton to come visit him on the set of Baywatch. Gabriel is battling stage 4 cancer and is a huge fan of “The Rock.” 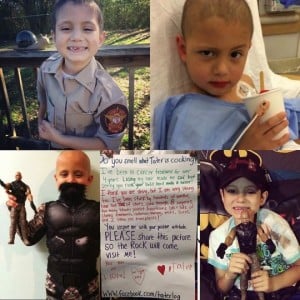 Gabriel’s family started a Facebook campaign to try to make the little boy’s wish of meeting his favorite wrestler come true. In a touching photo, the sweet boy held a handwritten note to Dwayne saying,

“I’ve been in cancer treatment for over 4 years. Losing my hair made me sad, but seeing you rock your bald head made it easier! I think you are strong, but I am very strong too. I’ve been struck by hundreds of needles, have had TONS of shots, gone through 8 surgeries, too many blood and platelet transfusions, lots and lots of chemo treatments, radiation therapy, tests, scans and 2 stem cell transplants.”

RELATED: How NFL Quarterback Kirk Cousins is using his fame to help to save lives

Not only did Gabriel’s post go viral, but it reached “The Rock” himself! And when Dwayne saw Gabriel’s message, he responded that he’d not only be coming to visit him, but would also be arranging for Gabriel to be a special guest on the set of the Baywatch movie.

Having come from humble beginnings himself, giving back is something that’s always been important to the star. In 2012, Dwayne shared a memory on his Instagram account of watching his mother cry as the family’s only car was repossessed. In that same post, he surprised his mom with a brand new car!

At 14 I saw my mom crying about our only car being repossessed. This felt good. Merry Christmas mom.

Posted by Dwayne The Rock Johnson on Sunday, December 30, 2012

Seeing his family struggle to make ends meet as he was growing up was very influential in his desire to make it to Hollywood. In fact, those struggles helped to teach hime just how precious life is.

Hear Dwayne talk about a powerful moment in his childhood that completely changed how he valued life in the video below. 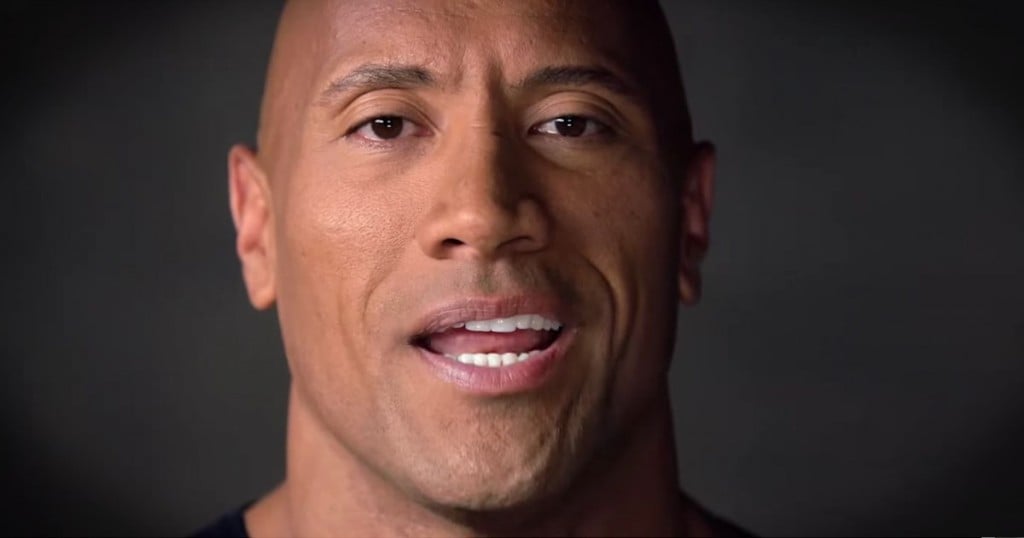 Along with the motivation Dwayne derives from his family, he also leans on his faith. He says it’s what’s helped him battle depression, as well as what’s gotten him through the tough times that preceded his fame.

“At that time, which was five or six years ago, for me I was little unsure of what was actually gonna happen, you know, so I just have to, you know, put my faith in God and continue to work hard and hopefully good things will happen,” he said in an interview about the journey that led him to wrestling.

But with support from his family, faith in the Almighty and lots of hard work and perseverance, Dwayne finally made a name for himself, and the rest is history!

“I certainly, I feel very blessed. I count my blessings, every day,” he said.

And of course, it’s the hard times that help us to appreciate the good. So, it’s incredible to see that no matter how busy or how famous this “tough guy” gets, he still takes time out for the things that truly matter!

To see more of “The Rock’s” softer side, watch as he lets a 2-year-old girl believe she is pulling a plane by herself in the video below:

See how this A-List celebrity honored one of his late fans who had Down Syndrome! 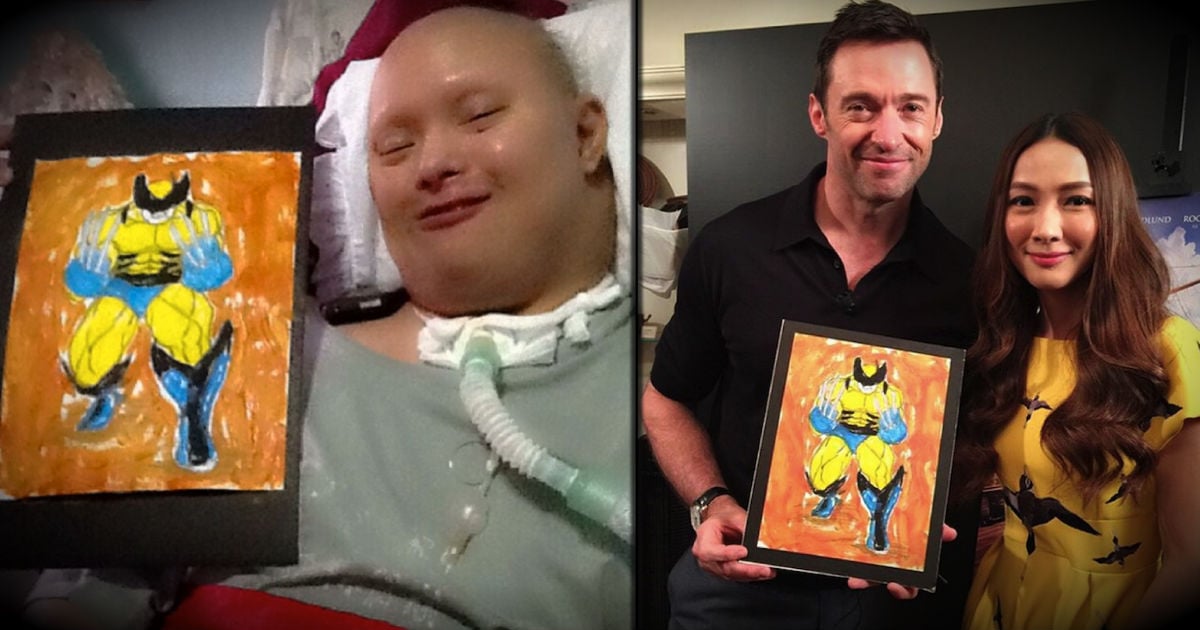