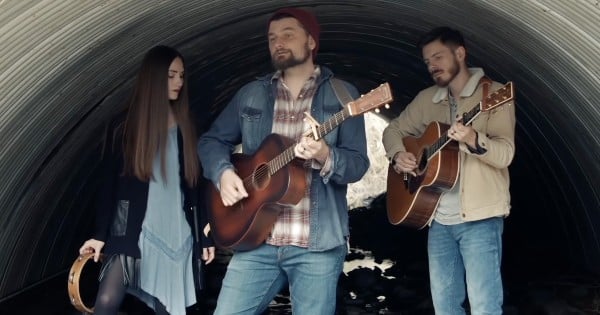 Dakota Striplin claims to be Elvis’ grandson and his fresh take on ‘Love Me Tender’ during his audition on The Voice makes it hard to deny the connection!

At the start of this video, a young man named Dakota Striplin begins to sing and play guitar with the voice of an angel. A judge immediately turns around her chair and puts her hand on her heart.

Suddenly, another judge says, "I need to see what's going on here" and flips her chair. At the end of his song, one judge shares how excited she is that this young man is here. The judges are shocked that he not only sang, but he was also playing, too.

They ask him what caused him to choose that song and artist. Dakota responds that Elvis Presley inspired him. His grandmother used to love going to the shows and there is a running joke that he could be his grandson. The judges laugh when they see the resemblance.

As Dakota begins to share his story, he says that his dad does not talk about it much. However, his grandmother used to go and help with Elvis Presley's shows in Hawaii. She would take Dakota's dad but none of her other kids to Hawaii with her.

When Elvis passed away, his grandmother lost it in a bigger way that seemed more personal. A few years ago, a DNA test proved that his grandfather is not his biological grandfather. So the thought is that Dakota Striplin actually is Elvis’ grandson.

After the story, two judges stand up in hopes to be selected as his coach. In the end, he selects the judge who turned for him first. Then there is one more clip of Dakota singing in a knockout round.

Sometimes we may not know where we come from, but we can always rest in our unchanging identity in Christ. When we have accepted Jesus as our Savior, we are permanently in the family of God.

YOU MAY ALSO LIKE: Footage From 1970 Elvis Presley Rehearsal Shows Him Performing A Rarely Seen Mashup

"But as many as received Him, to them He gave the right to become children of God, even to those who believe in His name." John 1:12