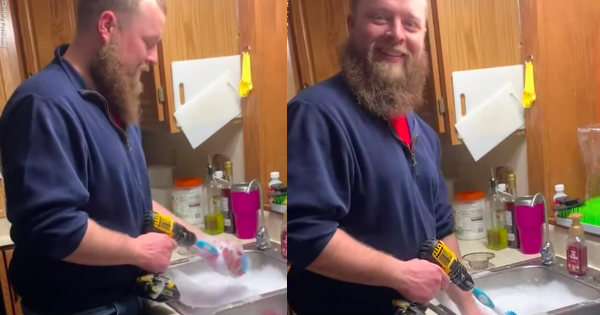 When this daughter finds out that her dad has been feeding a fox, she thinks that he has lost his mind!

In her exact words, Amy MacMillan from Scotland shared online that her dad has "lost the plot". In the U.K. this phrase means that someone has become confused and does not know what they should do. This is what Amy thought of her father once she found out that he befriended a wild fox and has been feeding it extravagant meals. Not only that, but when her dad went away on a trip, he expected his family to keep feeding the fox the lavish meals while he was gone!

RELATED: Messi The Puma Can’t Go Back To The Wild So Now He’s Just A Big Ol’ House Cat

This father must have a strong love for this wild fox that he found in his garden. Just wait until you hear about the food that he has been leaving him! In a note left for his family, the father listed out the foods that he has been feeding the fox. He writes out exactly what he gives him during his two-meals-per-day feeding schedule.

Ma dad has lost the plot 😭 he's been feeding a random fox in the front garden for months and has actual pinned up written instructions on how av to feed it whilst he's on holiday 😭 pic.twitter.com/tarw1RgAr6

For lunch, he leaves the fox chicken or drumsticks. For dinner, he leaves him a large selection of dog stick chews and a handful of biscuits. While he was away, I'm sure Amy's dad left written instructions for his family to make sure that his new furry friend was taken care of.

Amy even got her dad a fox keychain to have while he was traveling. That way he can have something to look at and hold when he misses his fox friend back home.

YOU MAY ALSO LIKE: Couple Wakes To Discover Injured Mystery Dog Inside Their House But All Doors Closed

What a thoughtful father to make sure this fox has a nice, substantial meal twice a day. And it's good to know that his family supports his wishes, even if they think that they may be a little far-fetched!