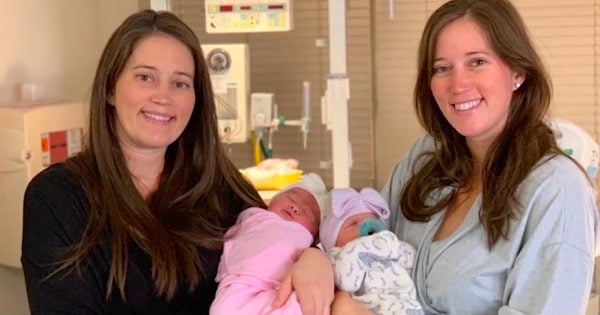 Rhys Pleming’s sunrise photo showing a figure in the clouds would be pretty incredible all by itself. But adding to the intrigue is the fact that the image came from the very first sunrise of 2020!

When 2020 arrived, 30-year-old Rhys Pleming decided he wanted to see the very first sunrise of the New Year. So, he and a friend hiked to the top of Snowdon, the highest peak in England and Wales.

The cloudy conditions probably would have deterred most people. But not Rhys.

“There was only a 50/50 chance of seeing the sunrise because of the cloud,” he explained. “But me and my friend decided to go up anyway.”

The two buddies started hiking at 6 am in the hopes of seeing something spectacular. And after catching a figure in the clouds, the morning certainly didn’t disappoint!

Photo Of A Figure In The Clouds

As Rhys Pleming reached the summit of Snowdon, he pulled out his camera. And the photos he captured are incredible!

In the hazy mist of the first 2020 sunrise, the images show what appears to be a figure in the clouds. And, of course, science has an explanation for the phenomenon.

It’s called the Brocken Spectre and is extremely rare to catch. The atmospheric phenomenon is said to occur when the sun is low behind a hiker. The rays cast an enlarged version of their shadow onto the surface of the mist below, with a halo-like ring of light surrounding it.

Rhys Pleming never expected to catch a figure in the clouds and describes it as “perfect timing” and just “pure luck.” Yet, the fact that this rare phenomenon occurred at the first sunrise of 2020 seems like even more “perfect timing.”

Maybe it’s just a coincidence. But given how 2020 ended up turning out, perhaps the figure in the clouds was a sign.

YOU MAY ALSO LIKE: Mysterious Figure Appears Over Cabin Miraculously Spared From Catastrophe

Whether a trick of the light or not, the image can certainly serve as a reminder that our Lord and Saviour will come back one day. And we want to make sure we are ready for Jesus’ return!

“Behold, he comes with clouds; and every eye shall see him, and they also which pierced him: and all kindreds of the earth shall wail because of him. Even so, Amen.” Revelation 1:7