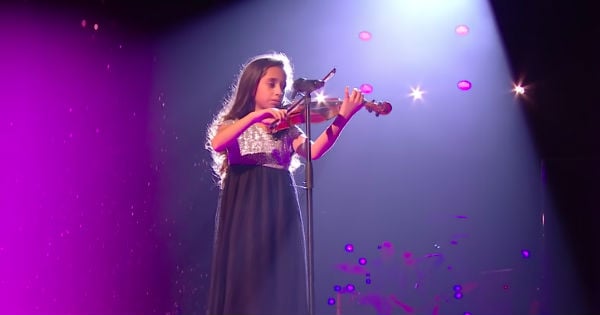 Young Girl Plays ‘You Raise Me Up’ on Violin And Then Starts Singing, Leaving Everyone in Awe
Read Article »

There’s nothing quite like a Frank Sinatra and Dean Martin duet. So, this vintage clip from The Dean Martin Show where the duo sings a medley of classic songs is a special treat, in deed!

Frank Sinatra and Dean Martin were all smiles and strong vocals as they two-stepped side-by-side for an epic duet.

RELATED: Frank Sinatra Gets Abruptly Interrupted by Don Rickles on Johnny Carson & It Has Him in Stitches

Their dancing and vocals flowed in-sync with one another. They both dressed the part too, with matching tuxedos, but different color pocket squares.

The songs from the Frank Sinatra and Dean Martin duet consisted of the following jams from various artists:

They joked on stage as they sang. Impressively they never missed a beat. Clearly, the performance was for the audience's enjoyment and also their own.

RELATED: Dennis van Aarssen, A Young Contestant on the Voice, Sounds So Much Like Frank Sinatra It’s Crazy

The two singers took turns leading in the various songs, playing off of one another's energy as they went along. They only sang excerpts of each of the songs during the Frank Sinatra and Dean Martin duet. Otherwise, they would have had a concert on their hands.

Both men have left great legacies from their life's work. Thanks to today's technology, we can all relive or experience for the first time, moments like this with the click of a button.

While these two men defined their careers through music and comedy, their talents have also appeared in movies. The original Ocean's Eleven (1960) featured both men. Not only that, they also appeared in Sergeants 3 (1962), 4 for Texas (1963), and Robin and the 7 Hoods (1964).

During their time, Frank and Dean were known to be a part of the Rat Pack. The Rat Pack performed together, partied together, did movies together, and included other celebrity members: Sammy Davis Jr., Joey Bishop, Peter Lawford.