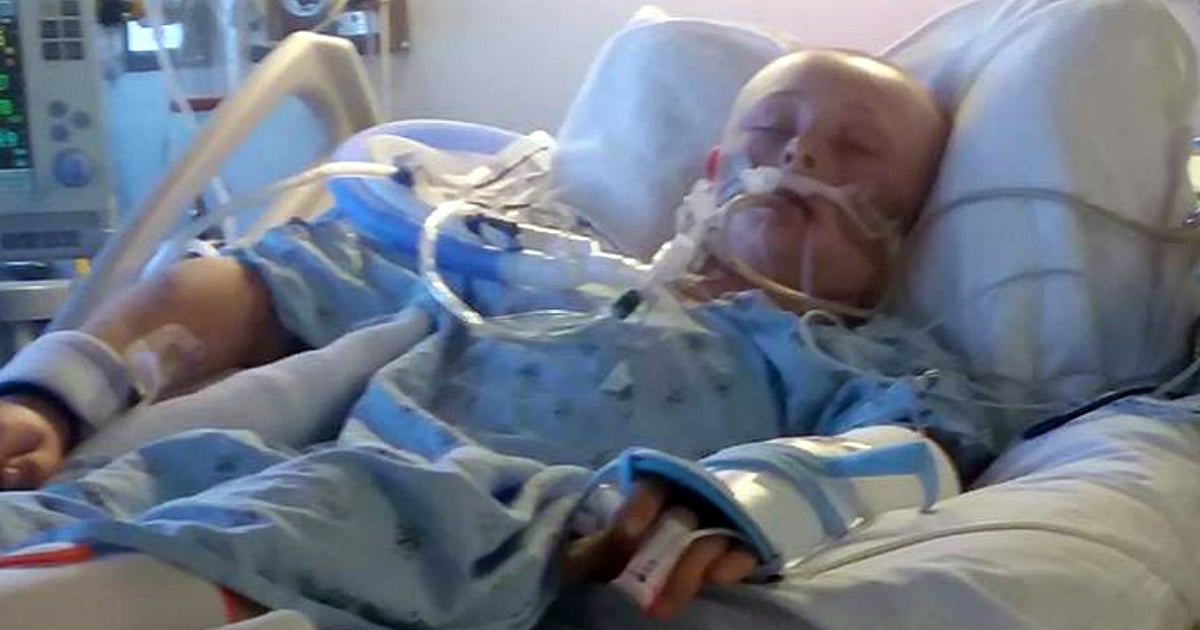 Sometimes the truth is stranger than fiction. And Tia Freeman’s story of how she gave birth alone in a hotel bathtub is quite a doozy!

By the time Tia Freeman found out she was pregnant, she was already in her third trimester. As crazy as that sounds, the 22-year-old offered up some explanation. For starters, the birth control she uses already eliminated her monthly cycle. So, there goes the first tell-tale sign.

Apparently, Tia also barely gained any weight. So, when a doctor broke the news that she was pregnant, Tia couldn’t believe it. Literally — she admits she kind of went into denial over the whole thing.

The Nashville woman, who works as a computer specialist in the US Air Force, already had a trip planned to Germany. At 6-months pregnant, she decided to carry on with the trip and worry about her little “surprise” when she got back. She didn’t even tell any friends or family.

Of course, we all know ignoring the facts doesn’t change them. And Tia can now tell you that firsthand!

A Long Way From Home

Tia’s route to Germany included a layover in Istanbul. During the 14-hour flight, Tia began experiencing some cramping. She dismissed it as possible food poisoning and went to sleep. 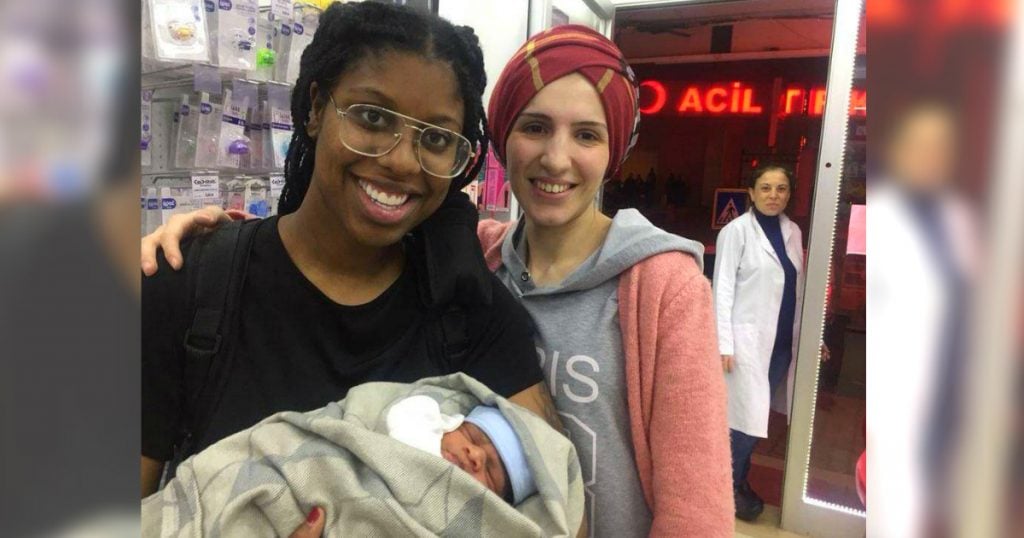 But by the time the plane landed in Turkey, the cramping grew severe. Tia gritted her teeth and fought through customs. Sweating profusely and nearly doubled over in pain, she started worrying maybe this was labor. However, she was determined not to have her baby in the middle of an airport.

"What you're not gonna do," she told herself, "is give birth on the airport floor."

So, she headed to her hotel.

On the way, she used her phone to do some Google searching. She realized maybe she was in labor, or maybe these were Braxton Hicks contractions (false labor). As it became clear this was the real deal, Tia was between a rock and a hard place.

At home, she would just call 911 and head to the hospital. But in a foreign country, it wasn’t quite that simple.

“Not many people spoke English that I encountered at first,” she said. “And I didn't know what the country's emergency number was and I didn't know how my insurance would work overseas so I just decided to DIY it.”

I make it to my hotel & now I'm sure I'm in labor. There is no way in the world I'm not in labor because I can barely standup at this point. So I'm in a foreign country, where no one speaks english, I don't know this country's emergency number, & I have no clue what to do. pic.twitter.com/sk6k10zdu5

At her hotel room, Tia started preparing for the coming of her son. She scoured Youtube for videos on the best way to deliver her baby. Deciding on a waterbirth, she filled the tub with warm water, grabbed some towels (one to bite down on and one for when the newborn arrived), and got in position.

It’s not clear whether or not Tia is a religious woman. But God was clearly looking out for her and her son that day. There, in Turkey, a long, long way from home, Tia gave birth alone in a hotel bathtub to her “little surprise bundle of international joy!”

(His middle name is Turkish) pic.twitter.com/HVlnvqEClQ

Tia was blessed and it only took a few pushes before little Xavier was born. Exhausted, Tia looked up a Youtube video on how to cut an umbilical cord. After sterilizing shoelaces and tying them tightly in place of a clamp, she used her pocketknife to cut the cord.

After cleaning up, Tia nursed her newborn son and the both of them fell asleep.

Heading Home With Her New Addition

Tia did wind up going to the hospital after all. Though she successfully gave birth alone in a hotel bathtub, something medical professionals highly advise against, she needed to figure out a way to get her and her baby boy home.

After convincing local police and Turkish Airlines staff that her bizarre story was true, the US Consulate in Istanbul helped her and Xavier get the attention needed. 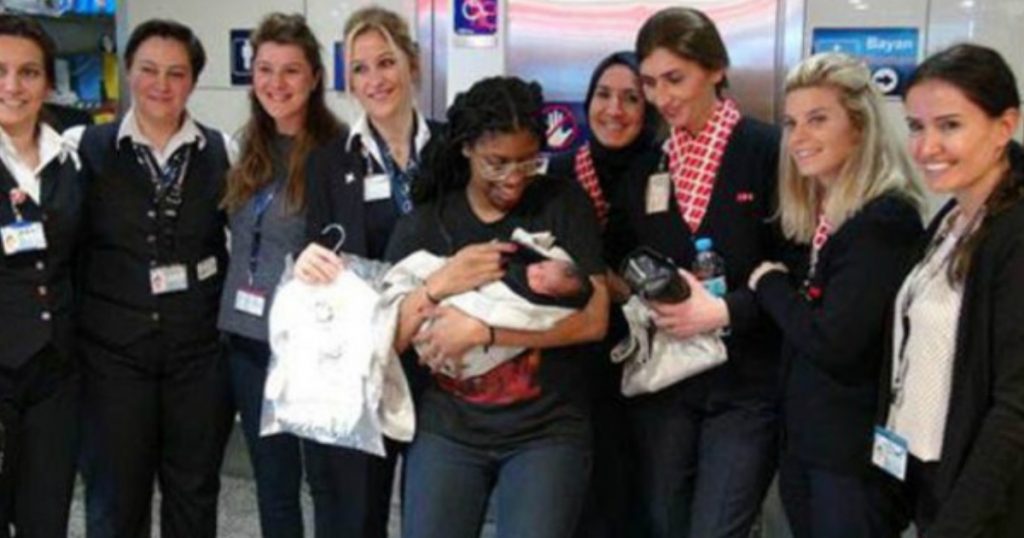 Of course, Tia also had to notify friends and family she was now a mom. No one, not even her own mother, had a clue she was expecting! Thankfully, they all showed her grace.

“No one had a clue,” Tia explained. “But they were all extremely excited. As soon as I flew back they all came to visit, bearing gifts and spoiling Xavier. They found out about four days after I gave birth to him while I was still in Istanbul. So, of course, they called every single day, wanting to talk to him and see pictures and videos and checking in to make sure we were okay.”

And while giving birth this way isn’t ideal, Tia is focusing on the blessings coming from the odd scenario.

“The experience taught me so much,” she says. “I learned how to be resourceful and calm under pressure. I was able to bond one on one with my son from his first breaths. I'm thankful that everything went well and I was able to deliver a healthy baby. I know everyone isn't always so fortunate but I appreciate the experience and hopefully, he'll think it's an amazing story when he's older!”

Thanks be to God for watching over this mama and her baby, and bringing everyone home safely!