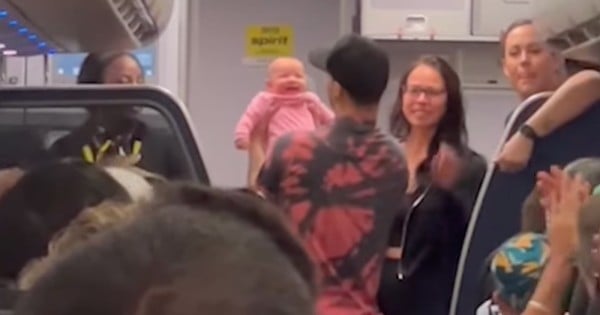 After a Halloween car crash killed a couple, it was up to Trooper Nathan Bradley to break the news to their 4 kids. But first, he went above and beyond to do something special.

Police officers are special people. By just doing their job alone, they are serving, honoring and protecting their communities. But special people usually don't stop at just doing their job. Special people go above and beyond the call of duty. When Trooper Nathan Bradley responded to a Halloween car crash, he didn't just follow procedure. He went far beyond to serve as a true guardian angel to the children impacted by this terrible accident.

It was Halloween night in Georgia in 2015, and Donald and Crystal Howard were making a quick supplies run to pick up more face paint and candy. But just a mile from their home, the couple's SUV went off the road and struck a tree.

Trooper Nathan Bradley heard the call of a "single-vehicle wreck with possible fatalities” come across his radio. He was nearby and headed to the scene.

When he arrived at the Halloween car crash, the first thing he noticed was the eery calm. The fact that no one was bustling around confirmed his worst fears. There was no one to save — both Donald and Crystal had not survived the crash. It was up to Trooper Bradley and a few others to find and notify the remaining family members.

The couple's ID's revealed their address, so Trooper Bradley headed to the home. He knocked on the front door, dreading the task before him of sharing the tragic news. But his heart completely shattered as the door slowly opened, revealing that Donald and Crystal were parents to four young children.

There stood the oldest, a 13-year-old boy. Behind him, peering with curious eyes, was his 10-year-old sister, and his two brothers — 8 and 6. All four were decked out in their Halloween costumes, and the oldest explained that their parents had just run to the store and should be back soon.

Trooper Bradley spent the next hour stalling, while he located the next closest relative. It turned out to be the paternal grandmother, who lived in South Florida. While she planned to leave immediately, it would take at least seven hours before she'd arrive. The 25-year-old Trooper notified Child Services and watched from the window of his car as the four children ran around the yard, laughing and playing.

Caring For The Kids After Halloween Car Crash

Technically, the Trooper's job was done. He could take the kids to the station and let Protective Services handle the rest.

But as I mentioned before, police officers are special people. He says,

“I immediately fell ill. Not only would these children discover they lost both parents, but would spend their Halloween in a county jail until somebody could tend to them; it just wasn’t right.”

So, he loaded the four kids into his car and took them out to eat, treating them all to milkshakes. He chatted with the kids, who bragged about how their mom was a good cook and their dad had served two tours in the army. It was obvious that these were good kids who loved and adored their parents, and it pained him to know the heartache that laid ahead.

While the kids ate, Trooper Bradley called his superior to get approval for the next phase of his plan. He invited the kids back to the Georgia State Patrol post for a tour and a movie night. They couldn't be more excited. The news Trooper Bradley still had to deliver to them weighed heavy on his heart, as these sweet children hailed him as the best cop ever.

At the post, Trooper Bradley's Corporal had shown up with his family, bringing popcorn, some candy and Disney movies. Soon after, a few other residents showed up with goody bags for each of the kids. A little later, a Sheriff showed up with a decorated bucket full of candy for each child.

RELATED: Police Officer's Kindness To A Struggling Dad Is Inspiring

After the movie, there were still several hours before the kids' grandmother would arrive. With her consent, it was decided that the kids would sleep at the post, which had several spare bedrooms. The kids were delighted, and as Trooper Bradley tucked them in, the little girl took Trooper Bradley by the arm, saying,

"You turned an F-Minus day into an A-Plus night!”

The words warmed his heart, but also carried a sting since Trooper Bradley knew they'd finally learn about their parents when morning came.

When the grandmother arrived, she and Trooper Bradley agreed to wait until morning to break the news to the kids, hoping to save the children from forever associating Halloween with the death of their parents. When the kids awoke, they headed back to their house with their grandmother, who would be the one to deliver the terrible news.

Trooper Bradley knew these kids were now a part of his life — he couldn't just say goodbye and send them on their way. So, he took one of his Trooper ball caps and wrote a kind note on the bill, along with his phone number, urging the kids to reach out to him anytime.

Not only did Trooper Bradley stay in touch with the kids, but he again went above and beyond. He set up a GoFundMe page for the kids, with the goal to not only fund the funeral services for their parents but also to establish a college trust fund for the children.

The story of Trooper Bradley's kindness went viral, inspiring the generosity of many others to flood in. In just 6 days, he raised over $450,000.

But more than that, thousands of encouraging messages poured in, which Trooper Bradley shared with the children. People have been sending care packages and clothing to the family. And many have prayed as the grandmother has been battling some health issues. And all thanks to one man's decision to love his neighbor:

"It's the first time in the line of duty I told someone I loved them and I do love them," Trooper Bradley said. "I care about them a lot."

Trooper Bradley visited the kids one more time before they left with their grandmother to head to Florida, where they now live. Justin, the oldest of the children, hugged him so hard that Trooper Bradley says he could feel it through his vest! They have remained in touch, and Trooper Bradley even invited the family to attend his wedding.

There is a still a long road to go for this family, so please keep them in your prayers. But the love and support they've been shown has surely done wonders to remind them that a great and loving God holds them in His mighty hands!