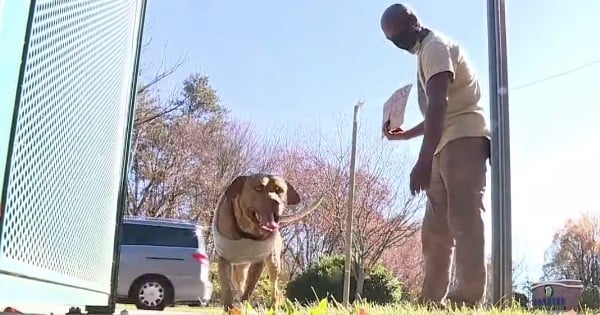 One tough grandma ended up wrestling a raccoon while hanging her Christmas lights, and this scary encounter is one she won't soon forget.

Donna Sanginario lives in Massachusetts and was putting lights around her home at the beginning of December. Suddenly, the 70-year-old woman heard a strange sound and turned to see what it could be.

"I turned around to see what the noise was, and I was staring at a huge raccoon about 10 feet away. Before I could do anything, it jumped at me. Worst nightmare of my life. Both me and the raccoon were screaming so loud," Donna shared. "I really thought I was going to die."

Donna and the raccoon were in a struggle, and the animal kept biting and attacking her, even when she put her arms around the raccoon's head.

“As I was screaming for help, he fell off my arm but jumped right back on me to continue to attack,” Donna explained. “After somehow tumbling to the ground, I got him in a headlock and wouldn’t let go. As he was biting me, I could hear bones breaking in his neck.”

Once the animal was quiet, Donna let it go and it ended up walking away. She quickly went to the emergency room to get the rabies and tetanus shots she needed to protect her. Since raccoons are some of the primary carriers of the rabies virus, those shots were imperative for Donna to get after the attack.

YOU MAY ALSO LIKE: Weather Glitch Happens During Live TV And Meteorologist's Reaction Brings On The Laughs

What a scary encounter for this woman to have while she was trying to get her house ready for the holidays! Thank goodness she is safe, and she says that she will carry protection with her next time she goes out into her yard.