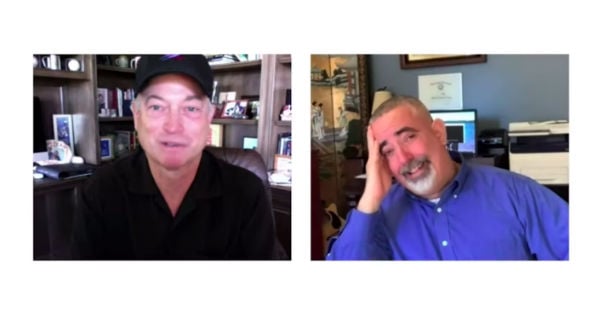 A 51-year-old grandmother carries grandchild when her own daughter could not. What an incredible gift.

Many women struggle with infertility, and it can be heartbreaking. After all, we grow up dreaming of the guy, the house, the white picket fence, and the little crew of kids that will have his hair and our eyes. But that wasn't the case for Brianna Lockwood. At least until her 51-year-old mother from Illinois carried the daughter she couldn’t.

Brianna Lockwood could not carry a child herself, so her mom, Julie Loving, suggested she be the "gestational mother" for her daughter's child. Brianna and her husband Aaron dreamed of having a family of their own. After a year of trying, they knew something was wrong. This led to two years of multiple rounds of in vitro fertilization, surgeries and several miscarriages, including a pregnancy with twins. After the loss, Brianna's fertility doctor told her that she would need to start considering surrogacy. Even though Brianna's and Aaron's embryos were healthy, her uterus was simply unable to withstand a pregnancy.

“Struggling with infertility was the hardest thing I’ve ever had to go through,” Brianna said. “When you have a plan for your life and then something like infertility gets in the way, I felt like I couldn’t see what I pictured anymore, that it could be taken away from me.”

Grandmother Carries Grandchild For Daughter When She Couldn’t

After Brianna's doctor suggested finding a family member or friend to be a surrogate, Julie pressed the idea with Brianna. Julie knew she could do it, she said, “I’ve run 19 marathons and done many triathlons. I felt health-wise, I could do it and I had really easy pregnancies with my two kids.” She added, “Once she [Brianna] had the miscarriage with the twins I started to talk to her about it. She was not on board and thought I was crazy, but I just kept pursuing it.”

Eventually, Brianna got used to the idea and then her mom began a series of tests. She saw five different doctors and passed with flying colors to be a surrogate despite her age. After Julie became pregnant in March, she not only faced a risky pregnancy but a pandemic thanks to COVID-19.

But God's plans prevailed as the pregnancy went smoothly! Baby Briar was born on November 2, weighing in at seven pounds, one ounce. Briar is a happy healthy baby girl with a strong family. Julie says someday when her granddaughter is old enough, she plans to tell Briar she was “wanted so much that we did everything we could to bring you into the world.”

Brianna echoed her mother's sentiments when she commented, "Briar Julliette will not be kept in the dark about her amazing birth story, her delighted mother said, promising to be "really open with her at a really young age and tell her when we feel like she can understand ... And just tell her the truth."

YOU MAY ALSO LIKE: Pastor Pushes Daughter Out Of The Way Of Falling 8,000-lb Boulder And Braces For Impact

But Jesus looked at them and said, "With man this is impossible, but with God all things are possible." Matthew 19:26