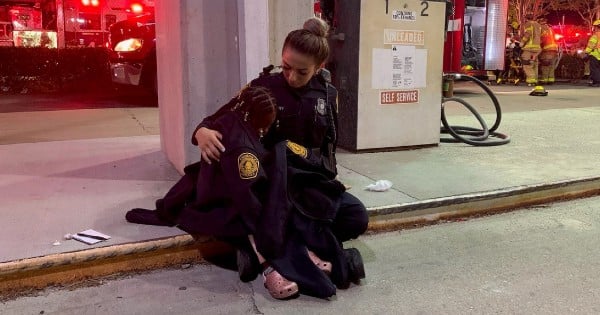 Rarely does one live to tell the tale of being bitten by a copperhead snake. But this man saved the life of his family by taking the bite for them.

A grandpa bitten by a copperhead snake leaves the hospital, and the reunion with his grandson is so sweet, that it will melt your heart.

RELATED: Pit Bull Hears A Little Boy Scream And Then Takes Snake Bite In His Place

This grandfather was out walking with his daughter, Rebekah Van Scoy, and grandchildren when they encountered a deadly menace. After he was bitten by a copperhead snake in the hand, he began fighting for his life as he went through rounds of antibiotics.

He was in a lot of pain and very tired. His youngest grandson Hudson didn't understand why his grandpa was suddenly not present in his day-to-day life as the pair shared a very special bond. Hudson loves his grandpa very much, and when he finally got to see him, Hudson nestled into his grandpa's arms.

RELATED: Grandpa Who Has Alzheimer's Rarely Speaks, but It's a Different Story When He Sees His Grandkid

Rebekah posted a video of their sweet reunion with this caption: "Hudson has the sweetest and most unconditional and loving bond with my dad. I love watching it grow." She added, "We asked for continued prayers as he is still in SO much pain, and the recovery is long.”

Grandpa has a PICC line for IV antibiotics and cannot do much of anything for 6 weeks. He is still struggling to get movement in his hand and fingers. His pain is taking over, and we are praying for that to cease and for him to have more comfort."

Slowly Rebekah's father has been recovering from being bitten by a copperhead snake. And Hudson has been by his side as much as possible even though it had been touch and go for healing.

She noted, "For a while they were not getting the infection under control so they increased his dosage multiple times. It now seems to be under control. However, the high amounts of medicine give lots of other side effects that make it hard for him to have the energy or to feel good enough to go anywhere or do anything. It makes him dizzy and very sleepy."

But Hudson doesn't mind as long as he gets to hold his Grandpa's hand. The pair are inseparable. And they will get to have more moments together thanks to God's protection and healing.

YOU MAY ALSO LIKE: Man Survives Rattlesnake and Bear Attack Only to Get Bitten By Deadly Shark

"Children's children are a crown to the aged, and parents are the pride of their children," Proverbs 17:6