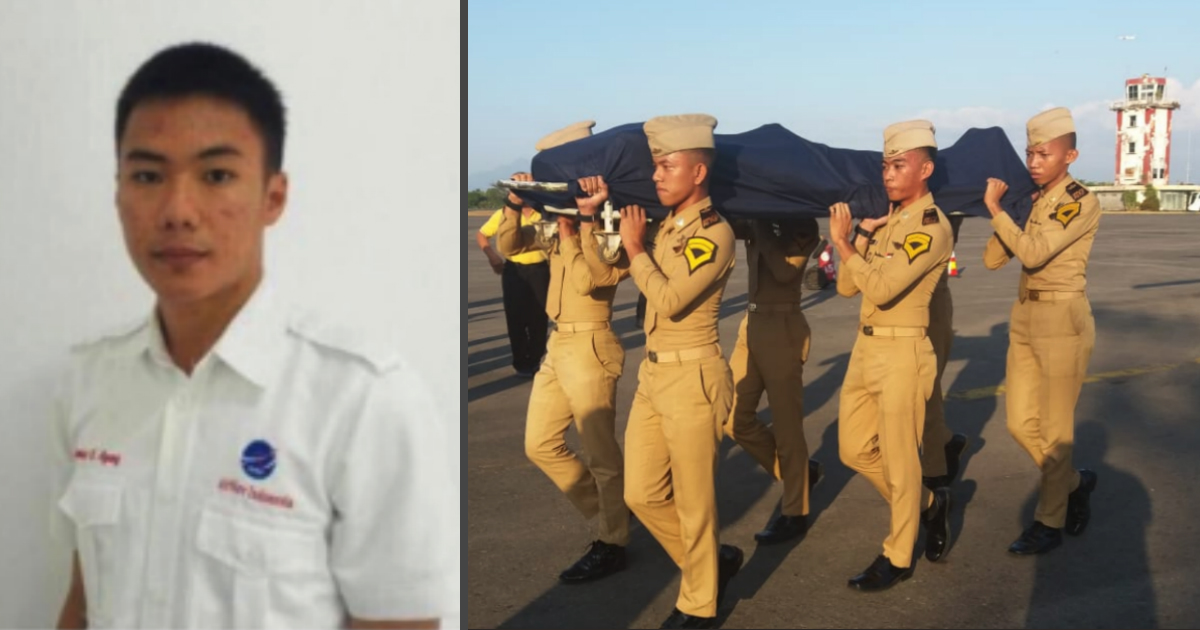 When Stephanie McCabe of Scotland rescued Snowflake, she knew some considered the breed “dangerous.” But when Snowflake barged into her disabled son’s room, the rescue dog’s frenzied barking alerted Stephanie to a danger the mom would have otherwise missed, saving her son’s life!

Snowflake is a Staffordshire Bull Terrier, a breed falling under the “pit bull” umbrella. These “bully breeds” often get a bad rep because historically people used them for the now-outlawed sport of dogfighting.

But according to the AKC, decades later, good breeding practices have transformed the “Staffie” into a mild, playful family companion. And Snowflake can certainly attest to that!

Before joining Stephanie and her family, Snowflake had a rough life. 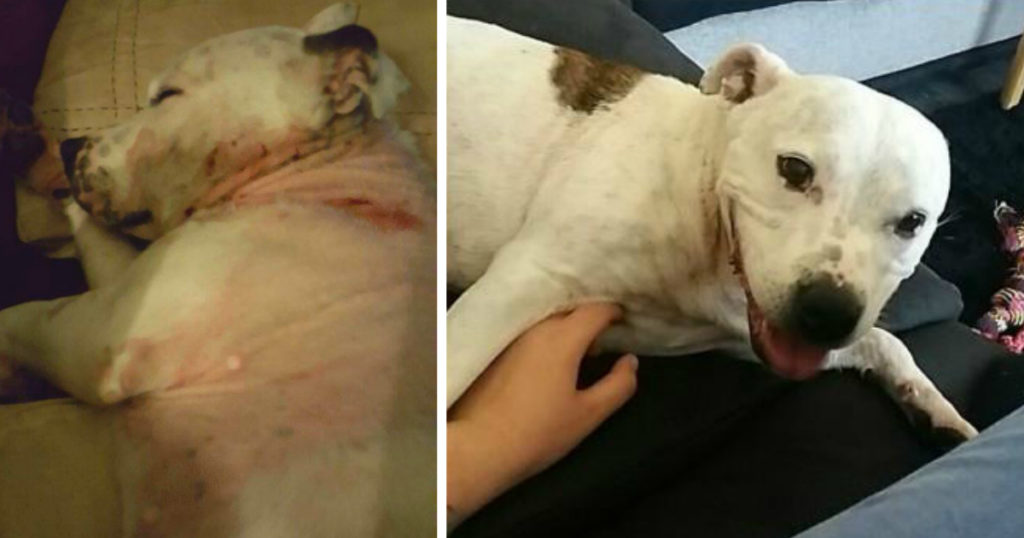 A rescue organization found the poor pup abandoned in an empty apartment, on death’s doorstep.

“She was left in a flat for three weeks before she was picked up by the rescue and she was abandoned and unfed. Then she came to me,” Stephanie explained. “She was just all scabs. She was close to death when she was found.”

Emaciated and suffering from a terrible skin condition causing her fur to fall out, the group sent Snowflake to Stephanie.

RELATED: Emaciated Pup And Boy with Autism Found Healing Together

Originally, the plan was to simply foster Snowflake. But that changed shortly after Stephanie introduced Snowflake to her children — her daughter, Lacey, and her son with cerebral palsy, Ryan.

Since Lacey could run and play with Snowflake, the dog bonded more quickly with her than Ryan. At least, that’s what they thought.

“Snowflake was more fond of my daughter Lacey and was never normally bothered about Ryan because he has cerebral palsy and just would sit in his chair. So he doesn’t jump about with her or anything like that,” Stephanie explained. 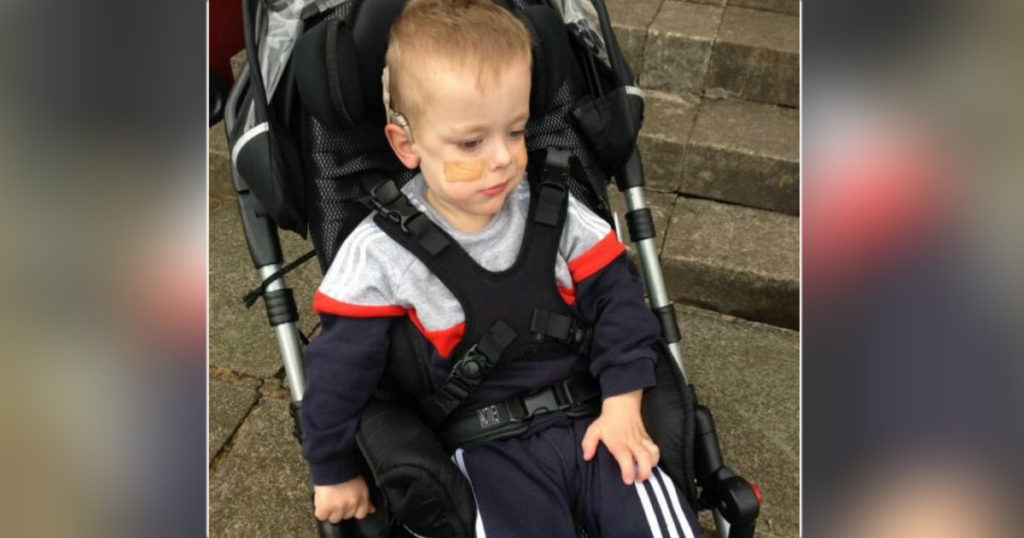 The rescued pit bull didn’t seem to take much notice of Ryan. But in just a few short weeks, Snowflake proved she loved every single member in her foster family. And what she did for Ryan showed she was an important part of this family!

One day, Snowflake’s unusual behavior had Stephanie questioning whether she’d made a mistake bringing the rescued pit bull into her home.

Ryan, who suffers from cerebral palsy, epilepsy and lung disease, was in his room asleep. But Snowflake became frantic outside his bedroom door. The dog’s frenzied barking alerted Stephanie that something was up.

Given that Snowflake had only lived with them for a few short weeks, the odd behavior unnerved Stephanie.

“I actually got a bit of a fright,” she recalls. “I just didn’t know what she was doing. She didn’t normally bother with Ryan.”

When Stephanie opened Ryan’s door, Snowflake barged in and jumped onto his bed. The frantic pup started clawing at Ryan’s back like she was digging.

“It was if she was trying to turn him over,” Stephanie said. “At first, when I ran into the room, I thought she could be trying to hurt him but it was as though she knew she had done what she was supposed to.”

Stephanie rolled her son over to find a terrifying sight. Ryan’s face was purple!

Somehow, the tubes from Ryan’s oxygen tank wrapped tightly around his neck.

“He may have tried to cry but he couldn’t because the tubes were so tight. And because he is deaf he doesn’t speak,” Stephanie said.

There should have been an alarm on the oxygen tank to signal danger, but it failed to go off. Thankfully, God sent the McCabe family a furry angel!

“She saved his life. Without her I would have just left Ryan thinking he was sleeping,” Stephanie said.

And the responding paramedics agree. If not for the pit bull’s heroic actions, Ryan would have died that night.

“She has never been trained to do that, it just appears to be natural for her,” Stephanie explained. “So we managed to release the tubes, and Snowflake just then sat by the bed.”

After what Snowflake did for Ryan, there was no way the McCabe family was going to let her go. The foster family decided to give their fur angel a permanent place in their home.

And she’s a wonderful addition with a very special role. After Snowflake’s barking alerted Stephanie of her son’s close call, the pup now serves as Ryan's therapy dog. She knows when Ryan is unwell and alerts his mom immediately. The job is clearly a divine appointment because Snowflake hasn’t had any form of training. She simply senses when something is wrong with her human sibling, naturally.

And as the story of this real-life hero spread, Snowflake was nominated for a national hero award from The Amplifon Awards for Brave Britons. And needless to say, Snowflake has her whole family cheering her on!

Snowflake is living proof that not all angels wear wings. Some have four legs and wear a coat of fur!

YOU MAY ALSO LIKE: Pit Bull Grabs Baby's Diaper And Pulls Her From Bed In The Nick Of Time