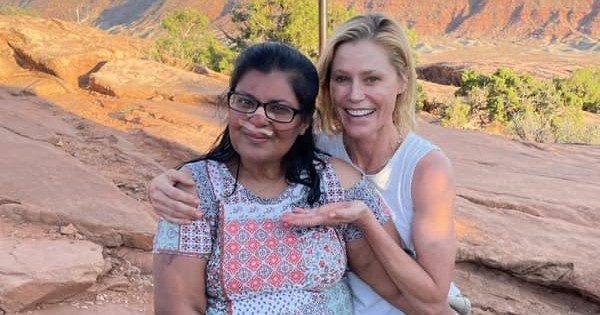 Ashton, a heroic waitress at Cracker Barrel, recounts the incredible moment she raced out of the restaurant and jumped a barbed-wire fence. And all so she could help a screaming mom on the side of the highway!

"About a year ago, in July, I was following a server to a table with a tray," says Ashton, who is the hero of this story. "She was passing out the first tray and I was looking out the front window facing the interstate. I could see a lady pull off to the side at the exit."

That's when Ashton first sees Agnes, the woman who stopped in the road begging for help.

"She was screaming for help. And I went running for the fence and got to the top. A couple was standing right there, and I told them to just push me over because of the barbed wire at the top," shares Ashton. "Agnes, the mother, was running around the car, frantic, telling me her son was in the car and he was sick and not breathing. We unbuckled him and got him out on the ground, and I started compressions. I remember all I kept thinking was ‘Oh my goodness, I hope this works.'"

Next thing the waitress at Cracker Barrel knew, the woman's son started breathing.

"It was a long time, says Agnes. "Paul took a breath, like, he gasped."

What a relief! And Agnes was extremely grateful and in disbelief. "Who would risk her life, in the midst of COVID, to come help you with your child that's dying?" she says.

Boy Safe Thanks To Waitress At Cracker Barrel

An ambulance arrived and took Agnes's son, Paul, to the hospital. Because Agnes was from out of town, Ashton wanted to help her get to the hospital where they were taking her son.

"She didn't know where she was going. I offered to drive her, but she said no," shares Ashton. "I put the GPS in her phone, and I hopped back over the fence and went back to work."

After Paul was released from the hospital, Agnes drove the two of them over to the Cracker Barrel to go see the heroic waitress, Ashton.

"And we all just cried. We just cried the whole time," Agnes shares. "If it wasn't for Cracker Barrel at that location with Ashton, I wouldn't have my son. Not a day passes by that I don't think about Ashton and what happened."

"I mean, I would hope that someone would do that for my child," says Ashton. "It's what we're supposed to do, right?"

RELATED: Waitress Spots Danger While Taking Different Route Home And Steps In When No One Else Will

What an incredible story! Ashton and Agnes embrace at the end of the video, and Agnes goes on to say that Ashton is her angel. God had Ashton in the right place at the right time, because thanks to her, Paul is still alive today.