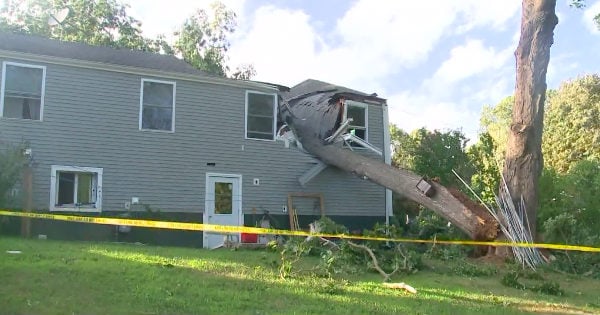 In this harrowing, yet inspiring real-life story, a husband saves his wife from a great white shark attack, using nothing but his bare fists to fend off the beast!

Chantelle Doyle and her husband, Mark Rapley, were enjoying a day at the beach together off the Australian coast when things took a terrifying turn.

RELATED: Heroic Dad Punched Shark 5 Times To Save His Daughter And Grandma Thanks God

As the couple surfed the waves, a great white shark made his way toward Chantelle, biting her leg. Seeing that his beloved was in grave danger, Mark had no time to think things through.

The heroic husband just knew he needed to act quickly to save his wife.

With no weapons, Mark did the only thing he could think of to try and get rid of the shark. Instinct took over and Mark started punching the great white over and over with his fists.

“You start thinking, amazingly, where to punch,” he later explained. “So you’re like, I’ll just attack the eye or whatever, you just start thinking differently, I suppose.”

Mark gave no thought to his own safety during the great white shark attack. The husband simply did what he had to do to save his wife.

“When you see the mother of your child, and your support, everything that’s who you are, you just react,” he said.

Mark Rapley’s blows eventually had the intended effect. The nearly 10-foot long shark let go of Chantelle’s leg. After that, several Good Samaritans helped Mark get his wife to the shore, where an ambulance and paramedics were already waiting.

Chantelle went into surgery for serious leg injuries and is recovering in the hospital. But things certainly could have been much worse if Mark hadn’t reacted the way he did.

This husband showed incredible courage and devotion through his efforts to save his wife!

“Husbands, love your wives, even as Christ also loved the church, and gave Himself up for it; that He might sanctify it, having cleansed it by the washing of water with the word, that He might present the church to Himself a glorious church, not having spot or wrinkle or any such thing; but that it should be holy and without blemish.” Ephesians 5:25-27