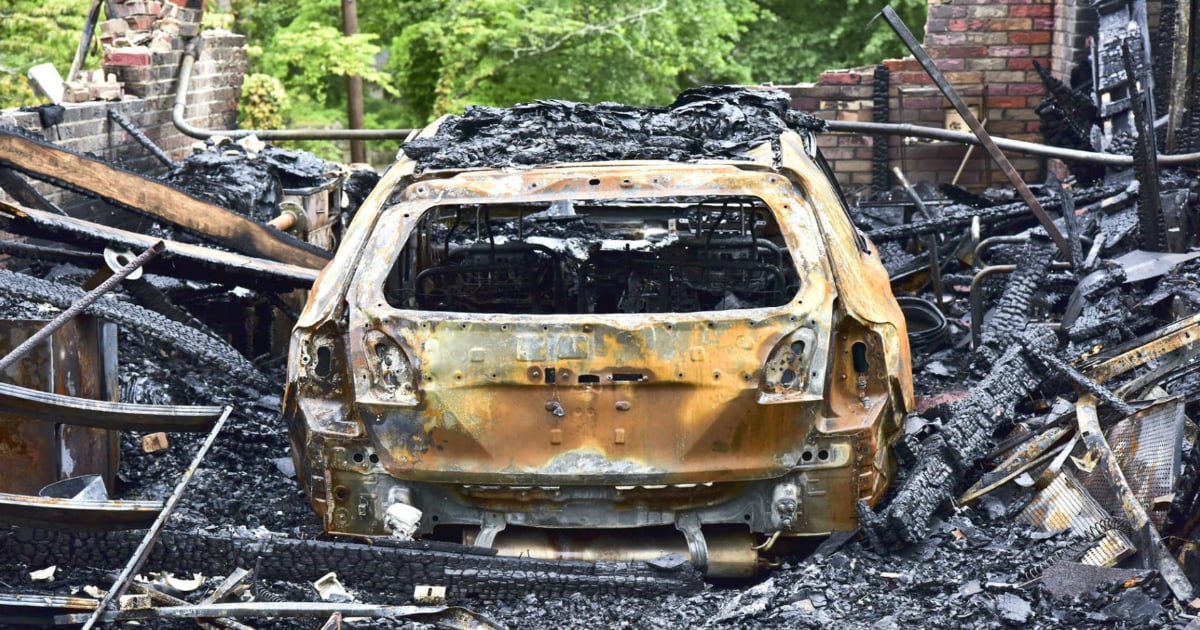 In just a matter of seconds, a standard Southwest Airlines flight turned terrifying when the engine exploded mid-flight. Chaos broke out and tragically, one woman lost her life. Miraculously, though, the plane did not crash. And as inspirational stories about Southwest flight 1380 surface, it’s clear God was also at work that fateful day.

It’s amazing how things can change in the blink of an eye. One second the flight attendants on Southwest Airlines flight 1380 were taking drink orders. The next, passengers heard a loud pop and then pandemonium broke out.

Oxygen masks fell from the ceiling and the plane took a sudden and sharp dip.

It turns out, the loud pop was most likely the sound of shrapnel hitting and shattering the acrylic window in Row 14 after the engine exploded. The pressure difference between the cabin and the air outside wreaked havoc, sucking Jennifer Riordan, the passenger seated there, through the hole.

Chaos erupted. As a group of brave passengers tried desperately to save Jennifer, others braced for death while the pilot fought to keep the plummeting plane from crashing. And as terrifying and tragic as this event is, there’s also evidence of God’s presence all throughout!

Hollie Mackey (42) was seated in Row 14. She’d been just about to head to the restroom when things got rocky. Jennifer Riordan, a mother-of-two and bank executive from New Mexico, sat in the window seat on the same aisle.

When the window blew out, the force partially sucked Jennifer through the hole. The seatbelt is all that kept her from leaving the plane entirely. Hollie and a teenaged girl seated between her and Jennifer immediately jumped into action.

"I grabbed onto Jennifer's belt loop area and wrapped my arm around her waist, and tried to pull her in. The little girl did, too," Hollie says. 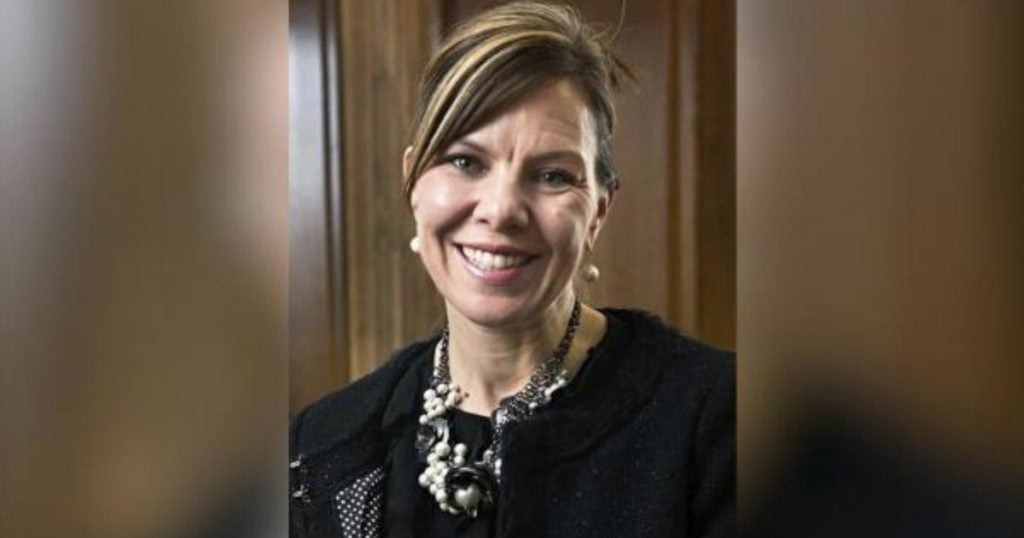 A Call To Help

Seated a few aisles up in Row 8, firefighter Andrew Needum helped his family put on their oxygen masks. Hearing a commotion coming from the back of the plane, he shot his wife a look, getting her silent approval to investigate. As a firefighter, Andrew says he’s trained to act in emergency situations.

“I felt moved to act as well as other people on that plane," he said. "God created a servant heart in me, and I felt a calling to get up and do something."

Andrew helped passengers pull Jennifer back into the plane, while other Good Samaritans worked to plug the hole with clothes and jackets. They performed CPR on Jennifer as the plane made an emergency landing. Sadly, though, Jennifer later succumbed at the hospital to her injuries from blunt impact trauma of the head, neck, and torso.

Andrew, Hollie and the other passengers who helped are being hailed as heroes. But both Andrew and Hollie find it difficult to feel triumphant after Jennifer’s death.

"Both of us expected to be going home to our families and sleeping in our own beds that night," Hollie laments. "I kept telling my husband, somebody else's family doesn't get to have this tonight, and it isn't fair."

"There was a family that lost a loved one," Andrew said. "I feel for her family. I feel for her two kids, her husband, the community that she lived in. I can't imagine what they're going through, but I'm thankful that my family is here."

WATCH: Texas Firefighter Who Felt Called To Help Speaks Out

It’s impossible to answer the question of why bad things happen to good people. But as prayers and messages of condolences pour in, Jennifer’s family has expressed gratitude for all the support received since her tragic death.

"We appreciate the outpouring of support for our family and the love for Jennifer," a statement from the family reports. "Hearing stories of how she impacted everyone in so many meaningful ways has truly touched our hearts. To honor her legacy, an official memorial site has been created to fund causes that were near and dear to her heart."

For the rest of the 144 passengers, it seemed impossible anyone would survive. Convinced they were about to die, many of them sent farewell messages to loved ones on the ground.

Rev. Timothy Bourman was one such passenger. Seated in the second-to-last row with his wife, Timothy prayed for help.

With the possibility that his three daughters back at home were about to lose their mom and dad, Timothy texted them what he fully expected to be his last words: "Never lose your faith in God. Jesus loves you girls."

“They're going to get this from their dad from the grave,” he explained, “something that they could always have to know that we loved them."

Then, Timothy peacefully accepted the fate God had prepared for him. He desperately wanted to live. But as the plane continued to plummet, he feared he was going to die.

"But I also knew that whatever God's plan for me was, I was going to be blessed either way," he said.

As it turns out, Jesus did, indeed, put a special angel in the cockpit of the plane! 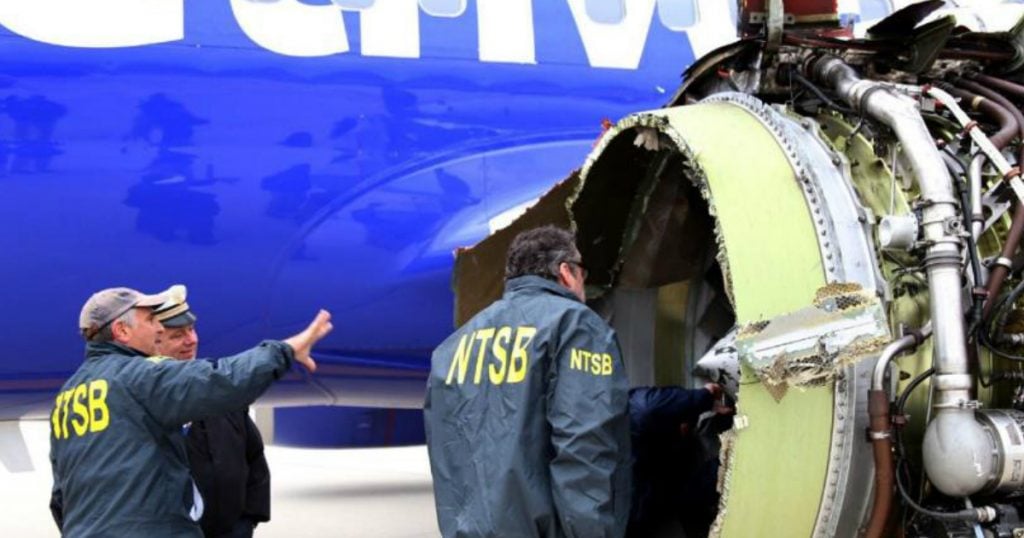 Among the chaos, a calming voice updated air traffic control of the precarious situation and then soothed the passengers.

"She was talking to us very calmly," passenger Alfred Tumlinson explained. " ‘We're descending, we're not going down, we're descending, just stay calm, brace yourselves,' ” he recalled the voice saying.

The voice of reason belonged to the plane’s pilot, Capt. Tammie Jo Shults, a former fighter pilot with the U.S. Navy.

Southwest Flight 1380 — The Woman At The Wheel

Friends and family describe Tammie Jo as a pioneer in her field. She always knew she “just had to fly.” As one of the first female fighter pilots for the U.S. Navy, Tammie Jo had to work hard to advance in the male-dominated field of aviation.

The book “Military Fly Moms” by Linda Maloney discusses some of Tammie Jo’s experiences. Tammie Jo recalls showing up at an aviation lecture during her senior year of high school, where she was asked by the retired colonel leading the class if she was lost.

"I mustered up the courage to assure him I was not and that I was interested in flying," she wrote. "He allowed me to stay, but assured me there were no professional women pilots."

Despite the gender barriers she faced, Tammie Jo rose to the rank of lieutenant commander during her 10-year service in the Navy. She twice received the Navy and Marine Corps Achievement Medal, along with a National Defense Service Medal and an expert pistol Marksmanship Medal.

In 1993, Tammie Jo retired from the Navy and settled in San Antonio with her husband, who is also a pilot for Southwest Airlines. 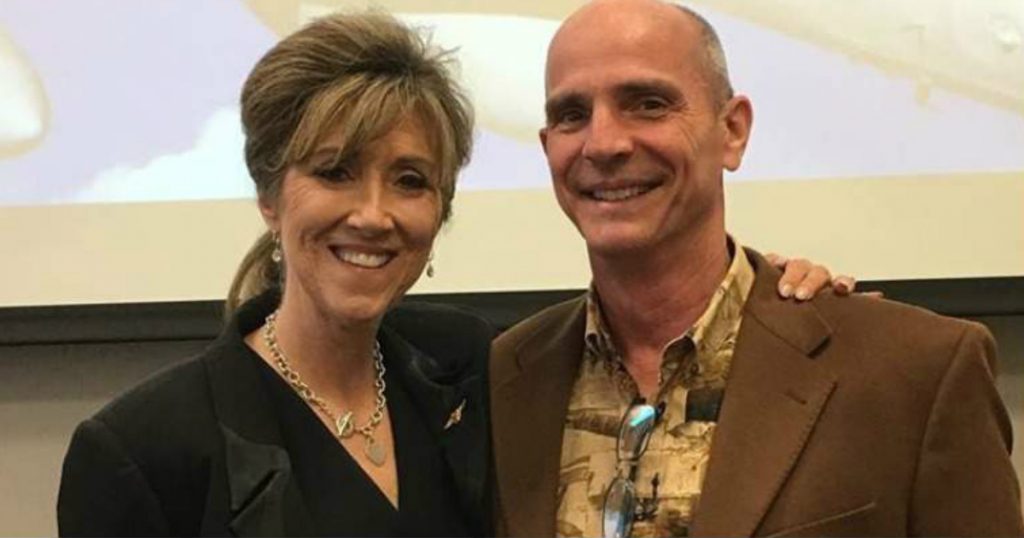 It was Tammie Jo flying the plane when the engine exploded. And this incredible lady — described as a “formidable woman as sharp as a tack” — is definitely a huge part of the inspirational stories about Southwest Flight 1380 circulating since the incident occurred.

In addition to being an exceptional pilot, Tammie Jo’s also a devout Christian. In fact, she once said her job as a pilot gave her, “the opportunity to witness for Christ on almost every flight.” And her mother-in-law suspects that played a huge part in the day’s outcome.

"I know God was with her, and I know she was talking to God," Virginia Shults said.

While keeping air traffic control up-to-date during the dire emergency, Tammie Jo wrestled with the malfunctioning plane and consoled the passengers. She prepared them for a crash landing, all while doing everything possible to land the plane in one piece.

" ‘Everybody, you gotta lean forward - hands up on the seat in the front, you gotta know that you're coming down, and you're coming down hard,' " Alfred Tumlinson says Tammie Jo instructed over the intercom. "But she didn't slam it down,” he said. “She brought the bird down very carefully."

Passengers sent farewell messages to their loved ones and prepared for the worst. With 148 lives in her hands, Tammie Jo managed to guide the damaged plane on the runway, touching down at 190 mph.

“She has nerves of steel,” Alfred exclaimed afterward.

The plane broke into applause and celebration. And as Tammie Jo breathed a sigh of relief, she made sure to take the time to tell the control tower “Thank you.” Then, she made her way back to the cabin to check on the passengers.

"She came back and talked to every individual in there personally and shook every hand. I got another day of my life because of that lady and the co-pilot," Alfred said. "What do you want to know about [Tammie Jo] other than she's an angel?" 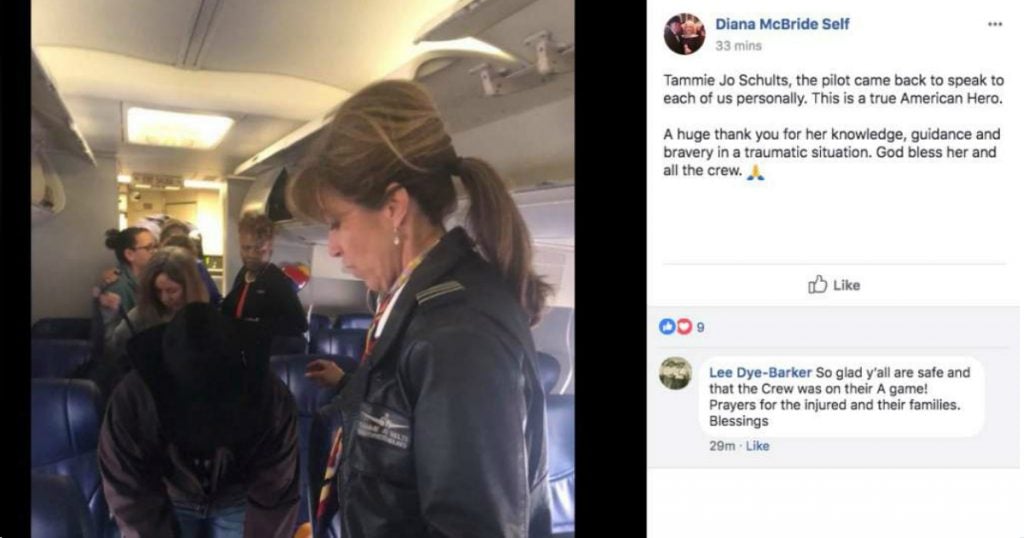 Praise and gratitude for Tammie Jo Shults has been pouring in since she pulled off the incredible landing. And much like the other humble heroes in the inspirational stories about Southwest Flight 1380, Tammie Jo is heartbroken over the loss of Jennifer Riordan.

“We all feel we were simply doing our jobs,” read a statement released by Southwest Airlines. “Our hearts are heavy. On behalf of the entire Crew, we appreciate the outpouring of support from the public and our coworkers as we all reflect on one family’s profound loss.”

If you enjoyed these inspirational stories about Southwest Flight 1380, and would like to continue to receive uplifting stories like these daily, be sure to sign up for our daily newsletter here