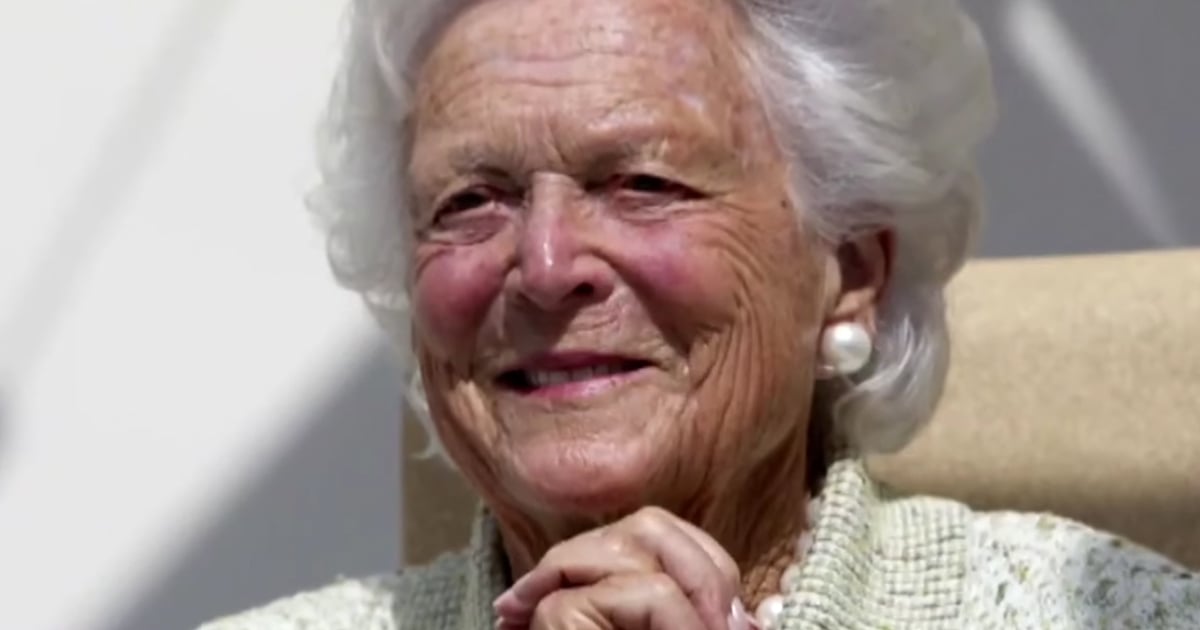 On April 17, 2018, not long after choosing “comfort care” over further medical treatment, former First Lady Barbara Bush went home to be with the Lord. And as inspiring reactions to Barbara Bush’s death pour in, so many speak to the 92-year-old’s abiding faith, which played a vital role in both her life and death.

Many fear death. But not former First Lady Barbara Bush. As a believer in Jesus Christ, she’s always known death has already been defeated.

"I'm a huge believer in a loving God," she proclaimed in an interview at the age of 88, "And I have no fear of death, which is a huge comfort because we're getting darned close. And I don't have a fear of death for my precious George or for myself because I know that there is a great God."

So, when it became clear her time was coming, she declined further medical treatment, opting for “comfort care” instead.

Barabara Bush’s Inspiring Reaction To Her Own Death

Barbara Bush accepted her fate with a grace that comes from knowing death is not the end, but just the beginning. In fact, any worry she felt wasn’t for herself, but for others. As her health failed her, Barbara knew God never would.

“It will not surprise those who know her that Barbara Bush has been a rock in the face of her failing health, worrying not for herself — thanks to her abiding faith — but for others,” read a statement from her husband’s office.

Statement by the Office of George H. W. Bush on the health of former First Lady Barbara Bush. pic.twitter.com/4csUS6IRKZ

Granddaughter Jenna Bush Hager reported her beloved grandma was in great spirits in her final days. Her good humor shone through as she prepared to head home to Heaven.

"I have had great medical care and more operations than you would believe. I'm not sure God will recognize me; I have so many new body parts!" she joked just a few weeks ago.

Not surprisingly, Barbara’s family wasted no time in posting tributes to the woman they loved dearly. Not long before Barbara passed, granddaughter Jenna expressed the void already felt in saying goodbye to the “glue that held the family together.”

“I love you more than tongue can tell, my Ganny,” Jenna wrote in a touching post on Instagram.

I already miss this FORCE of a woman- the "enforcer" because she was the glue that held our family together. She taught me to use my voice but also to value the opinions of others. She adored her friends and family; her loyalty was unwavering. Humor helps, she often said and it does, Gans, but I will miss your laugh terribly. She adored my Gampy, the first man she ever kissed; their love story is so engrained in the history of our family. Thinking of my Gampy tonight -no doubt missing his beloved desperately. Gans, people stopped me all the time to tell me how much they loved you. I didn't mind sharing you with them. I love you more than tongue can tell, my Ganny.

“Barbara Bush was a loving mother and grandmother. The world is poorer without her in it,” daughter-in-law Laura Bush wrote on Instagram.

And while losing their beloved matriarch wasn’t easy, Barbara’s faith and the assurance of her salvation is a great comfort to the entire Bush family.

“Laura, Barbara, Jenna, and I are sad, but our souls are settled because we know hers was,” her son George W. Bush said on Instagram.

My dear mother has passed on at age 92. Laura, Barbara, Jenna, and I are sad, but our souls are settled because we know hers was. Barbara Bush was a fabulous First Lady and a woman unlike any other who brought levity, love, and literacy to millions. To us, she was so much more. Mom kept us on our toes and kept us laughing until the end. I'm a lucky man that Barbara Bush was my mother. Our family will miss her dearly, and we thank you all for your prayers and good wishes.

Son and former Florida governor Jeb Bush referred to his late mom as a “force of nature,” while thanking everyone for their love, support, and prayers.

Devoted Husband Grieves The Loss Of His Wife

Jean Becker, chief of staff at the Office of George H. W. Bush, gave this update on the 41st President of the United States. pic.twitter.com/pjOKi3szVc

George and Barbara’s epic love story was well-known by their children and all across the country. And George was by his beloved’s side, holding her hand as she took her last breath.

And as family rallies behind him, they can all find comfort in knowing their sorrow is temporary.

“Crying may last for a night, but joy comes in the morning.” Psalm 30:5

Of course, as soon as news of Barbara’s passing got out, condolences poured in from all over. So many people, inspired by Barabara’s life and legacy, took to social media to honor her memory. And as you may expect, there were plenty of comments from those in the political world.

Barbara Bush was a remarkable woman. She had grit & grace, brains & beauty. She was fierce & feisty in support of her family & friends, her country & her causes. She showed us what an honest, vibrant, full life looks like. Hillary and I mourn her passing and bless her memory.

Barbara Bush was a woman of grace, wit, perseverance and character. A true advocate for lifelong learning, no one did more to advance the cause of literacy – both for students and parents. I extend my heartfelt prayers for and deepest condolences to the entire Bush family. pic.twitter.com/HMCEkCnshU

One of the greatest First Ladies in the history of our nation has gone to her Heavenly reward.

When I first met Barbara Bush in 1988 as she entertained spouses of congressional candidates at the @VP Residence, her sage advice and words of encouragement touched my life in a profound way. Since becoming Second Lady, she has become a trusted friend. I will miss her. pic.twitter.com/xmJzUQHVhI

From her scrappy demeanor and no-frills style to her boundless passion for family, literacy and freedom, Barbara Bush was America at its best. Her children were blessed to call her mother; our country blessed to call her First Lady. She'll live on in the heart of our Nation.

The U.S. Secret Service expresses sincere condolences to the family of Mrs. Barbara Bush, the epitome of class and grace during and after her service to our country as First Lady of the United States. pic.twitter.com/VKxYkb0WUB

Former first lady Barbara Bush has passed away at the age of 92. Our thoughts and prayers are with Jenna and the entire Bush family. 💗 pic.twitter.com/ZiKfM1ihCa

This nation owes this woman a huge debt for her wisdom, guidance, and love. Rest In peace my friend. What an incredible & inspiring life you lived Barbara Bush. Thank you for your friendship and so many memories. #alifewelllived pic.twitter.com/qlDiYKcttt

Barbara Bush served her country with class. She served her family with love and compassion. I'm grateful I knew her. And as an American, I’m grateful for her service. My heart goes out to her husband, children, great-grandchildren and the entire crew. A life beautifully lived. pic.twitter.com/WUuQgo8iBF

It was a pleasure to have met. Thoughts and prayers to the Bush Family. Much beloved. She will be greatly missed. pic.twitter.com/99G7AifPzd

Sending my sincere condolences and prayers to The Bush family. 🙏🏻 pic.twitter.com/BGb9CLhPIR

Rest In Peace Mrs. Barbara Bush.
You were a beautiful light in this world and I am forever thankful for your friendship. pic.twitter.com/yuZvQ7o8aH

And as happens with anyone who lives in the public eye, there are some who are making distasteful comments. But Barbara’s own words seem like the best advice for her opposers.

"Be kind. The moments I regret most are the ones where I could have been kinder."

“Be kind. The moments I regret most are the ones where I could have been kinder.”