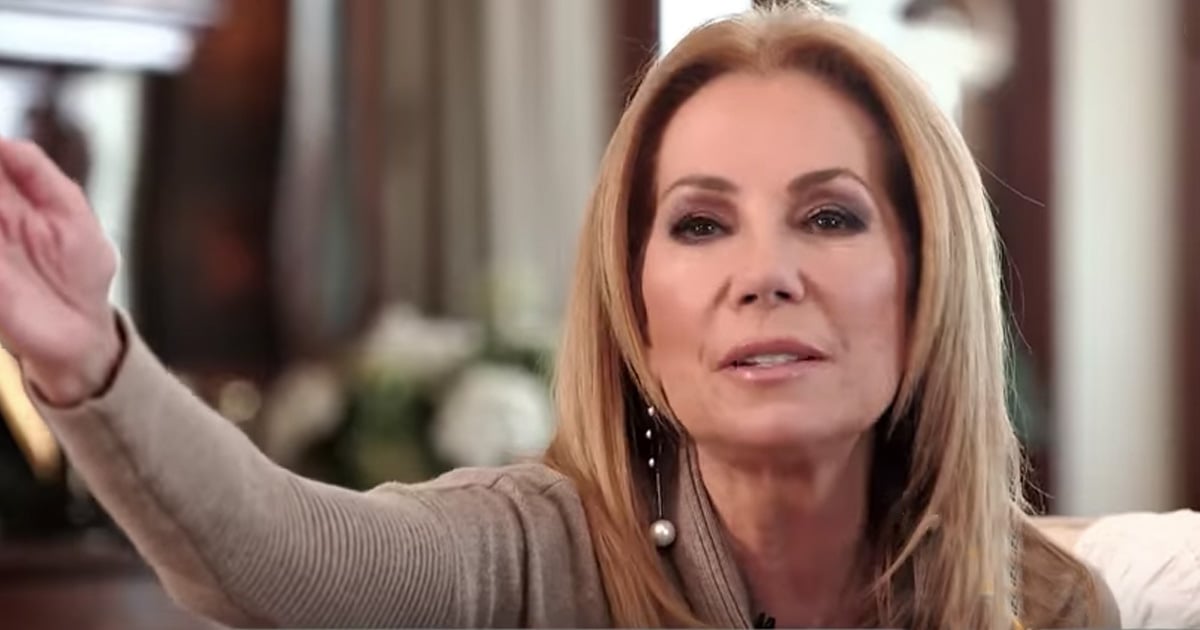 Kathie Lee Talks About Israel, Her Faith, And Her New Book
Read Article »

When an elderly woman unexpectedly died on a plane, passengers were more concerned with the flight’s detour than the woman’s traumatized daughter. But a series of mishaps put a man named Dan Eres on board. And this inspiring story of compassion on a plane reminds us that God has a way of putting the right people in the right place at the right time!

Inspiring Story Of Compassion On A Plane — Change Of Plans

Dan Eres was all set for his trip to the Philippines and Thailand. . . or so he thought. But when he arrived at Dulles Airport check-in ready to roll, he realized he’d made a terrible mistake. Poor Dan had mistakenly grabbed his expired passport.

As he scrambled to retrieve his valid passport, Dan’s original flight took off without him. When our plans get interrupted like this, it can be pretty frustrating and disappointing. But you never know when these setbacks are actually a divine intervention.

RELATED: Inspiring Story Of Compassion At An Airport — She Wouldn't Have Made It To See Her Dying Mom Without An Act Of Kindness

Once Dan got hold of the proper passport, he cobbled together a new flight plan to get him to his destination. He’d fly from Dulles to Dubai, then to Bangkok, next to Manila, and then on to the Philippines. He pondered what other “zany mishaps” might occur during his puddle jumping. 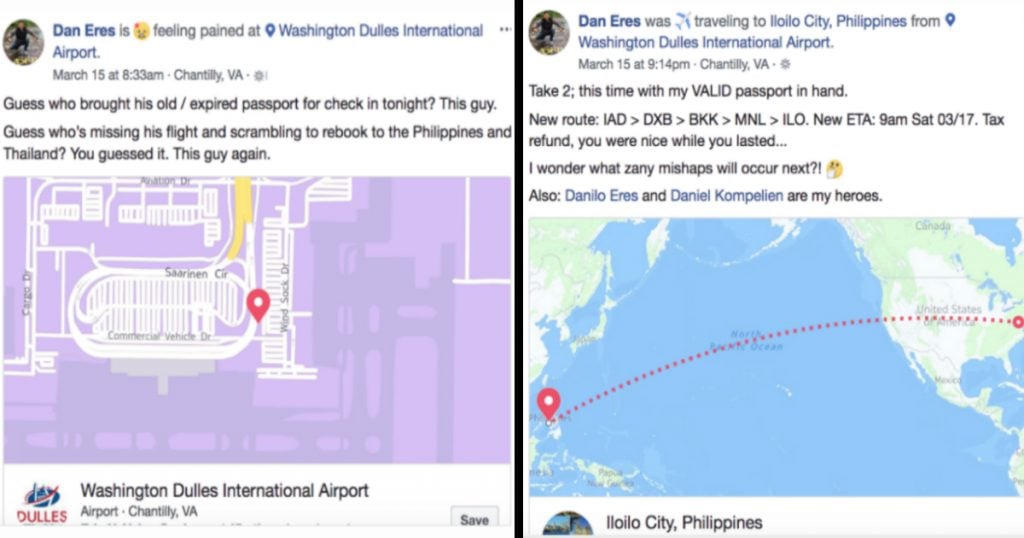 Dan was about to find out his rather indirect path to the Philippines actually put him smack dab in the middle of God’s plans!

Inspiring Story Of Compassion On A Plane — Another Interruption

Dan’s complicated blitz of flights was under way when another unexpected interruption occurred. Several hours into the flight from Dubai to Bangkok, an elderly woman behind Dan started having trouble with her blood pressure. Flight staff gathered up three passengers on board who were doctors and immediately surrounded the woman, trying to save her.

When chest compressions didn’t work, they tried a defibrillator. But it was too late. The woman passed away right there on the plane.

The woman’s poor daughter watched the whole thing, as did the rest of the plane. Once the elderly woman was pronounced dead, the pilot rerouted the plane to the nearest supporting airport — Hyderabad, India. He was following protocol, but many of the passengers were outraged by the detour, which would take them the opposite direction of Bangkok, their target destination.

RELATED: Total Strangers Surround a Crying Mom In The Airport (Why Will Give You Chills)

Needless to say, the woman’s daughter was a wreck. She’d just watched her mother die. Dan didn’t know either of them, but the scene hit him hard.

“I literally saw a woman pass away today. I’m shaken,” he said.

You’d expect the other strangers on the plane to have a similar reaction. But Dan couldn’t believe his eyes (and ears)! 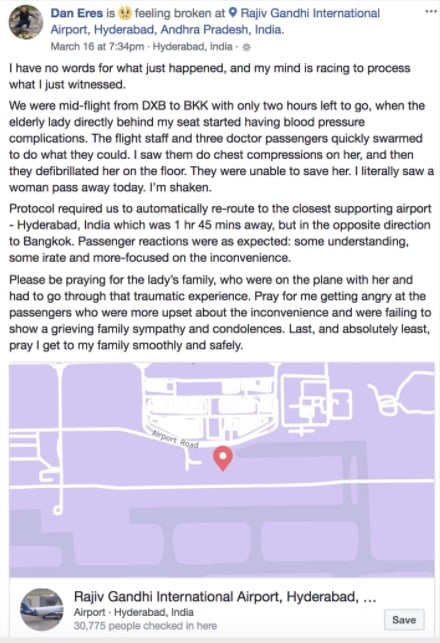 Instead of sympathy, many passengers were glaring at the woman and grumbling over the inconvenience to their plans. An especially rude passenger loudly complained, “Is the body off the plane yet?” Through sobs, the distraught daughter actually apologized to the plane.

It must have been very tempting to lash out at the cruel comments. But Dan is a faithful and tenderhearted Christian. He recognized God hadn’t put him there to condemn others. No, God put him there to show the love of Jesus!

Inspiring Story Of Compassion On A Plane — A Special Purpose

Dan is the kind of guy that notices a stranger in church and invites them into his friend group. And that’s exactly why God put him on this flight!

Dan stepped up and boldly told the grieving woman she had no reason to apologize. He squeezed her elbow and offered her support. He set the example, and other passengers started joining in. Another man gave the daughter a hug. The woman appreciated Dan’s compassion so much, she bowed to him in gratitude on her way off the plane. 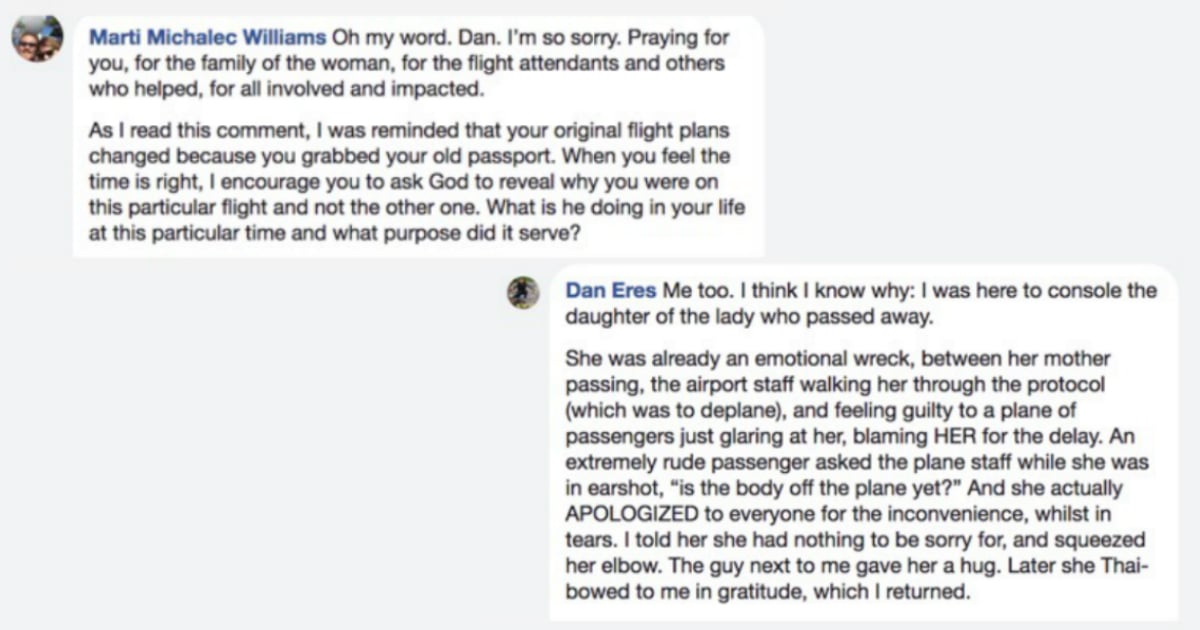 And THAT’S why Dan was on this flight. Had things gone according to his plans, he never would have been there to bless this woman in her time of need — to experience the blessing of being the light. It’s an amazing opportunity the angry passengers missed out on because they were so focused on their plans.

James warns of this kind of arrogance in the Bible.

“Now listen, you who say, ‘Today or tomorrow we will go to this or that city, spend a year there, carry on business and make money.’ Why, you do not even know what will happen tomorrow. What is your life? You are a mist that appears for a little while and then vanishes. Instead, you ought to say, ‘If it is the Lord's will, we will live and do this or that.’ As it is, you boast in your arrogant schemes. All such boasting is evil. If anyone, then, knows the good they ought to do and doesn't do it, it is sin for them.” James 4:13-17

When we focus solely on what we want, it’s easy to get frustrated and discouraged when those plans are interrupted. But God loves to work in the unexpected! Maybe the setbacks in your life are actually God interruptions.

Be sure to share this inspiring story of compassion on a plane with someone else, as a reminder that, while life doesn’t always go according to plan, God will always succeed in His plans!