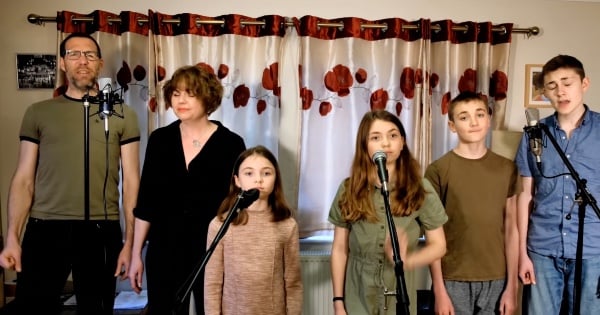 John Lennon’s son Julian Lennon wanted to find a special way to respond to the war unfolding in the Ukraine. So, he decided to sing his father’s iconic song, ‘Imagine.’

We all long for peace. We long for families to be together and safe, especially with the horrific atrocities of the senseless war unfolding in Ukraine. All of us want to do something to stand with those who have no peace and this performance says it all.

For John Lennon's son Julian, that meant singing ‘Imagine' for Ukraine. And you don't want to miss this incredible performance.

His son Julian inherited his father's gift of singing. As an artist, he said he felt compelled to support Ukraine in some sort of meaningful way. He wrote, "The War on Ukraine is an unimaginable tragedy. As a human, and as an artist, I felt compelled to respond in the most significant way I could. So today, for the first time ever, I publicly performed my Dad's song, IMAGINE."

The song Imagine was one of the best songs written and performed in John Lennon's career. The song released in the 1970s and the lyrics reflect our desire for a world without war, heartache, or pain. We know once Jesus comes back for his church, we will have a world without death, fear, or tears. And Julian's performance echoes our heart’s desires.

Julian added, "Because within this song, we're transported to a space, where love and togetherness become our reality, if but for a moment in time."

With 73,000 views and counting, Julian's performance to stand up for Ukraine is bringing us all hope and comfort that the war will end.

One viewer posted, "This was beyond beautiful and gave me chills. "Imagine" is, in my opinion, the world's most "needed" song in existence. No other song can do what "Imagine" does for those who listen during times of great tragedy. I know people often wish John was here to inspire hope during such times. Well, this performance did exactly that. The world needs "Imagine" now more than ever, and this was the ONLY way it could have been done justice."

Another viewer added how much Julian is like his father, John. "He sounds and looks so much like his Dad. A beautiful song that the world needed then and needs now."

We hope this never done before performance lightens the heavy burdens in your heart and brings hope that one day we can imagine a world without war.

YOU MAY ALSO LIKE: From Bomb Shelter To Big Stage, 7-Year-Old Who Went Viral Now Sings Ukrainian National Anthem

Revelations 21:4 "He will wipe all tears from their eyes, and there will be no more death, suffering, crying, or pain. These things of the past are gone forever."