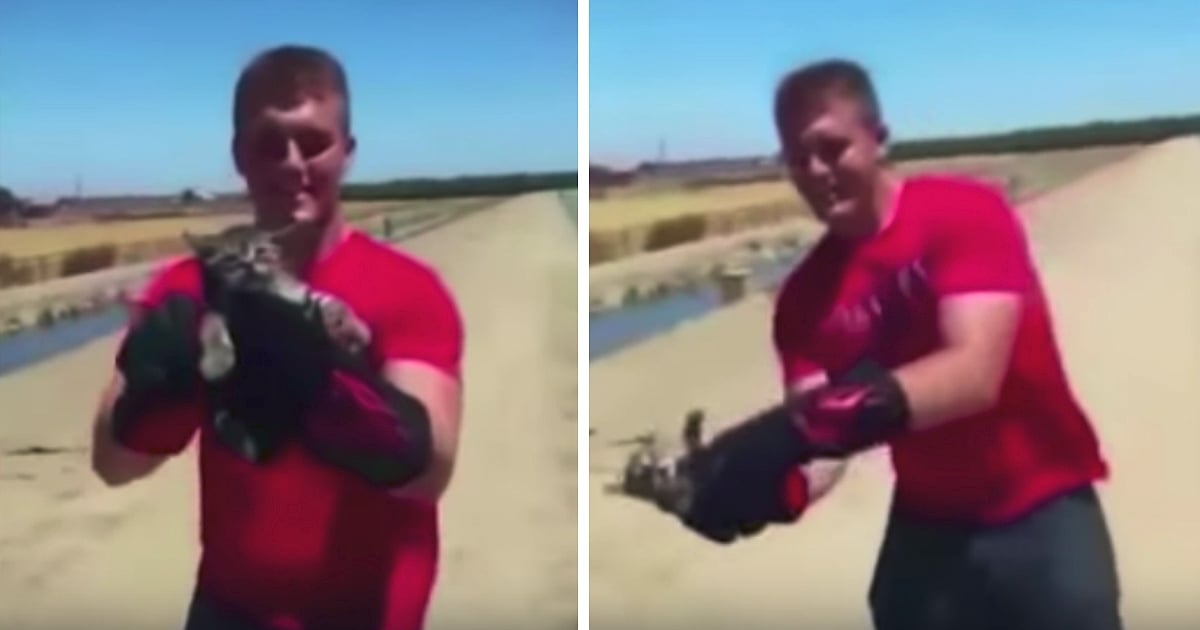 The angels at Hope For Paws met with one of their most urgent and challenging cases yet when a kitten fell 43 feet down a well pipe. The poor creature named Jessie spent 120 hours trapped (that’s 5 days!) in a pipe only 4-inches in diameter. But these folks refused to give up until Jessie was free!

Hope For Paws is a non-profit animal rescue organization located in California. They work to save neglected and abandoned animals trapped in horrifying situations.

And when they received an urgent request for help from Good Samaritans in South Carolina, they embarked on one of their most difficult rescues ever!

When homeowners in South Carolina heard tiny mews coming from a 4-inch pipe on their property, they realized a tiny kitten desperately needed their help. The well pipe went a total of 60 feet down. So, they knew things were bad.

The Good Samaritans tried to free Jessie on their own, including weaving together a makeshift ladder out of sticks. They’d hoped Jessie would be able to claw himself up the ladder. But the tiny kitten was too weak.

Try as they might, no rescue attempts worked. Poor Jessie remained stuck.

So, the desperate homeowners reached out to Hope For Paws, pleading for advice even though the organization is in Los Angeles.

First, Hope For Paws sent out a Kimberly Cockrell, an animal rescuer local to South Carolina. Kimberly did all she could to free the tiny, 5-week-old kitty. But she reported a dire situation back to Hope For Paws.

That’s when Eldad Hagar and Loreta Frankonyte, who help run Hope For Paws, hopped on a plane. They flew half-way across the country to lend a hand.

Meanwhile, Hope For Paws also posted a plea on their Facebook page. They asked folks for any and all suggestions on how to free Jessie. The comments rolled in and a South Carolina Plumbing company even showed up at the scene to lend a hand, free of charge.

Race To Help After Kitten Fell 43 Feet Down A Well

By the time Eldad and Loreta arrived at the home in South Carolina, the poor kitten had been trapped in the 4-inch wide pipe for five days! So, time was of the essence.

Jessie’s meows for help were getting weaker and weaker. The plumbers brought camera equipment and captured a heartbreaking scene. It had been nearly 120 hours since the kitten fell 43 feet down a well pipe and he clearly did have much more fight left in him.

Loreta and Kimberly spoke soothing and encouraging words to little Jessie. And as tired as he was, the sweet kitty continued replying.

Meanwhile, the plumbers worked to fashion a weighted, looped rope. The plan was to lower it into the pipe, using the loop to support and lift the trapped kitten to safety.

It took time to get the rope into the pipe just right. But then, finally, the rescuers successfully pulled Jessie to freedom!

It was a tense moment when Jessie first emerged from the pipe. The team rushed to make sure the rope wasn’t strangling the kitten’s neck. Collective gasps of relief filled the room when they saw the tiny kitten was weak but alive!

A Happy Ending For 5-Week-Old Kitten

The team warmed Jessie in the heated car, holding him close to the air vents, as they rushed him to a nearby animal hospital. He was already much better by the time they arrived.

The angels from Hope For Paws and all who joined in the rescue efforts saved little Jessie just in time. Thankfully, he didn’t break any bones but did suffer from hypothermia and some muscle atrophy.

God was certainly at work because even the slightest delay in the rescue would have made recovery impossible for Jessie. But the Lord made sure everything worked out.

Not only is Jessie all better, he is loving life in his new forever home where he’s got siblings of both the cat and dog variety!

Thank God for all the special angels who gave their time, resources, and effort to make sure this fur-baby got a happy ending!