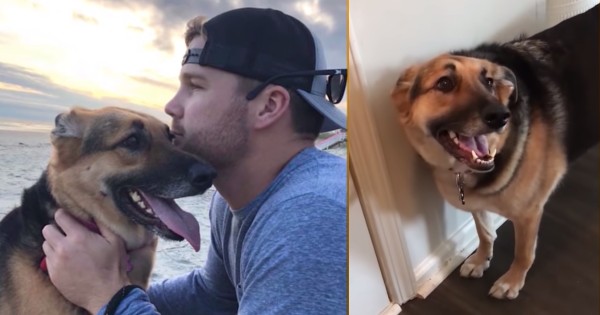 One man was shocked to see a bunch of lions in the backyard of his father's house when he went to go check on it. Talk about a startling surprise!

David De Beer and his wife Mariska live in South Africa and were going to check on David's father's property which is up for sale. But what they didn't expect was to find six lions lounging in the backyard and just making themselves at home!

RELATED: Dog and Mountain Lion Have Intense Staring Contest and Tiny Pup Refuses to Back Down

When the couple came face to face with the big cats, they started to record the crazy sight. At first, the lions were unfazed by David and Mariska. But then, the door closed behind the couple and made a loud noise. This scared the lions and they jumped up and walked away.

The house that David and Mariska were checking on is located on the Leadwood Big Game Estate, where big cats roam freely. It is between the Kruger National Park and the Blyde River Canyon. So while it may come as a shock to many people to see lions in their backyard, it may be a more common occurrence in this area of South Africa.

Thankfully, neither the lions nor David and Mariska got in each other's way during this encounter! And even though it must have been scary for a moment, that could have been a fascinating time to marvel at the majestic creatures so close up with a glass wall between them and the couple.

YOU MAY ALSO LIKE: Pro Baseball Player Pens An Open Letter To His Dog That Every Pet Owner Should Read

WATCH: Couple Finds Lions In The Backyard Of Home

LISTEN: Husband Leaves A Heart-Wrenching Goodbye Letter To His Wife And Then He's Gone | Story of How Luke Smallbone Saw the Lifeless Body of His Son And It Inspired ‘Need You More'