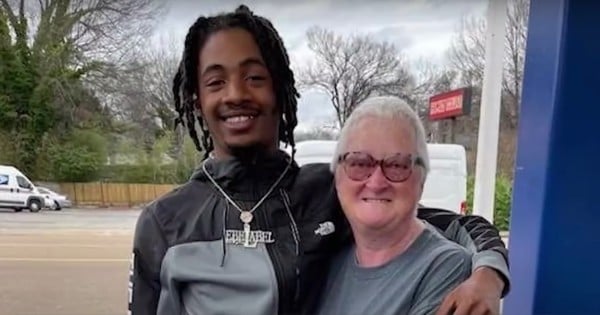 There is something incredibly special about receiving a letter from a soldier. Letters take time to write and they are a physical treasure because in today's day and age. We are so used to instant communication like text messages that we forget the value of a handwritten letter. That's what makes this story so incredible too. A soldier sent a letter home in WWII and it finally arrived 76 years later.

The letter from a soldier written so long ago arrived one ordinary day nestled among advertisements, bills, and Christmas cards for Angelina Gonsalves.

RELATED: In 1943, Naval Officer Writes A Postcard During WWII And 77 Years Later, It Arrives

Angelina had been a widow for more than six years after her late husband of 61 years passed. She loved him dearly and said he was her soulmate and quite a guy. Not only was he the love of her life, together they built a home, made memories, and raised five sons. When God had called him home, Angelina knew she would see him again someday but his daily presence was sometimes unbearable.

But that's when a letter from heaven arrived to give Angelina a reminder she wasn't alone. "It was just a funny feeling, he was around us at Christmas time. One of his favorite times of the year," she said.

So imagine her excitement when a letter from a soldier — her late husband — arrived in her mailbox!

Long-Lost Letter From A Soldier Arrives

Johnny had written the letter to his mother while he was serving in WWII. The long-lost letter was dated December 6th, 1945.

Even though it was written to Johnny's mom, Angelina was overjoyed to receive the letter. She said, "I love it. I love it. When I think it's all his words, I can't believe it. It's wonderful. And I feel like I have him here with me, you know?"

When you think about it, God knows when to give us comfort, hope, and an extra dose of love when we need it. He has quite a way of making these little miracles happen and a 76-year-old letter is no exception. May this story remind us all how God comforts us and loves us especially when we are missing our loved ones.

YOU MAY ALSO LIKE: Grieving Mom Finds Late Daughter's Letters Weeks After Her Unexpected Death

"Praise be to the God and Father of our Lord Jesus Christ, the Father of compassion and the God of all comfort, who comforts us in all our troubles, so that we can comfort those in any trouble with the comfort we ourselves receive from God." 2 Corinthians 1:3

WATCH: Letter From A Soldier In WWII Shows Up 76 Years Later