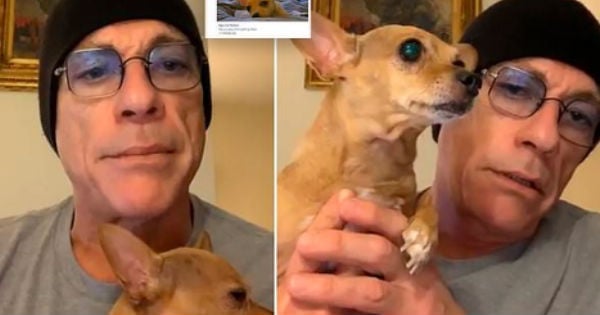 Raccoons are round, fuzzy woodland creatures with bushy tails and a black mask of fur that covers their eye area. These animals may look like cute, cuddly bandits, but they can be quite fearsome when approached. So when they make it on video, it tends to go viral. In fact, one man feeding raccoons goes viral but he's actually honoring his wife's dying wish.

In 2001, James Blackwood married his wife Jane. They were in love, happy, and lived in a cozy little home with their two cats, Connor and Charlotte. In a strange string of events that left one raccoon abandoned on their doorstep, he and his wife began feeding the raccoon in the evenings. It became their routine.

RELATED: Mom Walks Into Living Room And Comes Face To Face With A Koala In The Christmas Tree

Until James and Jane received tragic news a few months after being married. Jane had cancer. As they prayed for an end to her suffering, it came in a way neither expected. She was called home into Jesus' arms.

Before she passed, she had one dying wish–James would continue their little family tradition and feed the raccoons. He said, "I honored her wishes and took care of the cats and her mother for the next ten years. I have two rescue cats that live here, Connor and Charlotte, but they stay indoors."

What James wasn't expecting was for his evening routine to go viral. Garnering over twelve million views, it's easy to see why this "Raccoon Whisperer" has gone viral. It is adorable chaos as most wait patiently for him to pass out grapes, eggs, hot dogs (sans bun), and a bucket of dog food.

Some people haven't been as understanding and were more concerned about him feeding wild animals. James wrote in the description of the videos that he isn't concerned about diseases like rabies "because of the climate" but he shared that "they do suffer from time to time of Feline Distemper. They are treated for disease, ticks, fleas and worms."

He also said most were orphans and had been soft-released back to the forest. They leave in the fall and in the spring seek out new territories to start new families. They are not totally dependent on him for food because they do still eat in the wild.

What a way to honor God's creation and his wife's dying wish. This is absolutely too cute!

“Look at the birds of the air, for they neither sow nor reap nor gather into barns; yet your heavenly Father feeds them. Are you not of more value than they? Which of you by worrying can add one cubit to his stature?” (Matthew 6:26-27)