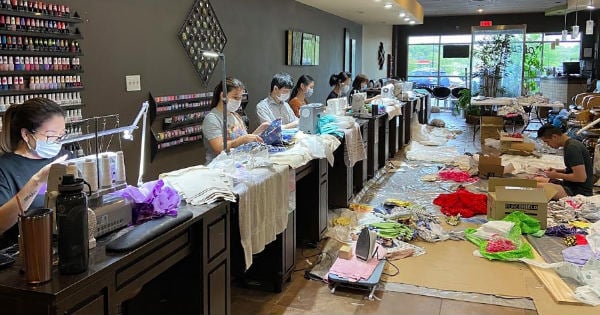 Many of us set out on journeys into the unknown. We don't always expect to come back with new-found friends. One man who suspected he was infected walked for 3 days to protect the public from coronavirus, but he wasn't alone.

This is the story of how Alixson Mangundok adopted his four-legged friend, Hachiko.

Alixson worked in Japan, nearly 75 miles away from his hometown of Kota Marudu. He returned back to Sabahan on March 25.

RELATED: 100-Year-Old Veteran Raises $11 Million Using Only His Walker To Support Those Affected By COVID-19

Before beginning his journey back to his hometown, while Alixson was at the Kota Kinabalu International Airport, he was screened for any COVID-19 symptoms. He had none but was still asked to visit Elizabeth Hospital for additional testing. He would have to wait for his results but was told that he could go home and self-isolate.

Thinking of the risk he could potentially pose to others, Alixson didn't take public transportation back home. He walked. The 75-mile distance wasn't going to be an issue, not like the potential of him possibly infecting someone. "I decided to walk to Kota Marudu because I am used to walking for kilometers during my hunting and farming days," he said. And so, this father of two set out on his walk back home.

Man Walks With Dog To Protect The Public From Coronavirus

During his travel, he passed by a cemetery where he was followed by a dog. Alixson assumed the dog would walk away eventually, but instead kept following him.

Together they ventured to a number of different places, resting at bus stops, and buying food when needed. They acquired supplies from shops where he bought sardines for his canine friend and water for himself. His fatigue prevented him from eating.

When they came upon roadblocks, Alixson showed authorities his passport and explained the reason for his travel. They respected his decision to socially distance himself and asked him to be careful.

Halfway home, Alixson happened upon his brother who was driving by. His brother arranged for a car to take Alixson home. Back at home, he stayed in a hut on a farm for some time instead of being reunited with his family. He wanted to keep everyone safe and waited until he received his test results before ending his isolation.

YOU MAY ALSO LIKE: Man Rescues 2 Pit Bulls Nobody Wanted And Later They Return The Favor When Someone Breaks In

When his results did come back they were negative. Alixson felt relief for his health and his family, and he acquired a canine friend along the way. He named the dog Hachiko, based on the loyal Japanese Akita dog.

What started as uncertainty ultimately had a good ending.