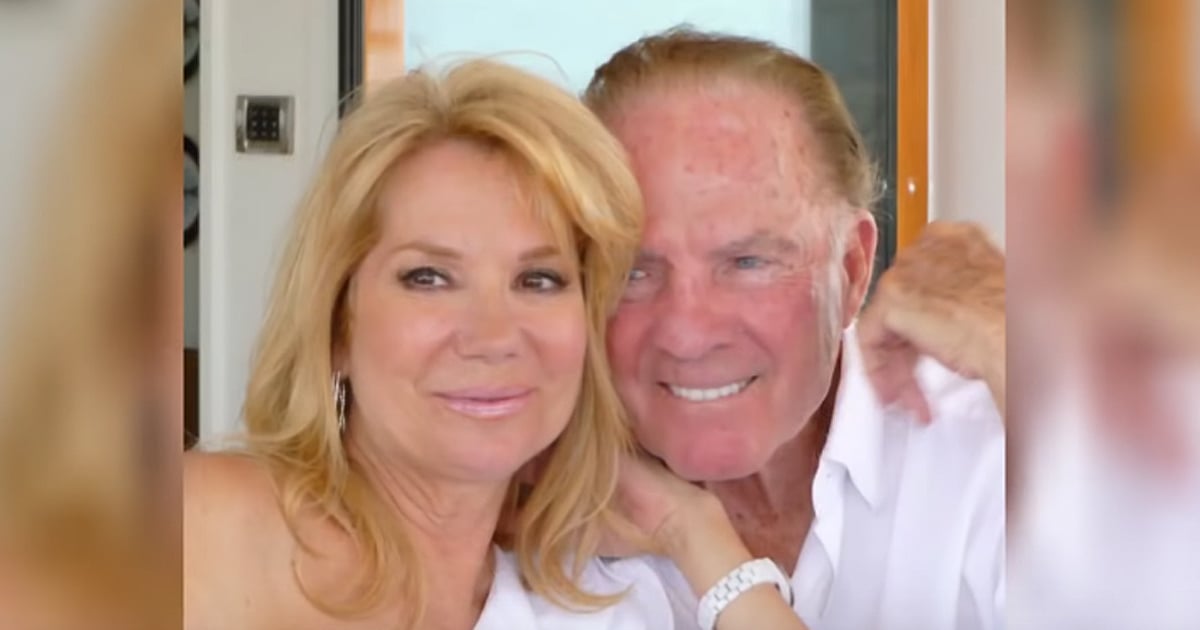 Kathie Lee Opens Up About Being A Widow
Read Article »

Marine Sgt. John Peck is one of the only recipients of a double arm transplant in the world, and it all started back in May 2010. John was searching for weapons in a building in a small village in Afghanistan when he turned and took a step toward the door to leave. This would be the last step John would ever take on his own two legs, as he stepped down on an improvised explosive device. The blast instantly claimed both legs and part of his right arm.

"I was flung through the air and felt something kick me really hard in the head," John recalled. "I believe it was one of my legs."

The explosion also severely damaged his left arm, which eventually also had to be amputated.

But John is a fighter. Just three years earlier, he was injured in Iraq when his vehicle was hit by an IED. John sustained an injury to his head when it made contact with the machine gun he was carrying. The injury would ultimately claim 21 years of John’s memories, many of which would never return. Yet John still reenlisted to return to active duty!

But now, waking in his hospital room after two months of sedation with all his limbs gone, John, feeling very alone, suffered a moment of despair. The wounded warrior began to gravely wonder if there was still a point to his young life.

"My mom told me as calmly as she could that it was bad," John recalled. "I felt alone and I didn't see much hope there. I'd pretty much decided to end it all."

John longed for a life partner, a wife, and he became saddened believing this would never happen for him. “Who would want him now?” he thought. Then he looked out his hospital window and happened to see a quadruple amputee out one day, caring for his young daughter. The man’s wife came up and kissed him, and John’s hope was restored. “If he can have that life, so can I!” John thought.

So John agreed to psychological and physical therapy and eventually signed up for a popular dating site. His wit and new-found optimism shining through his dating profile, John wrote things like, “I’m a blast to be around!” Jessica read John’s profile and something about it just resonated with her. Jessica reached out and sent John a message. At first, he thought she must be joking–that it was too good to be true.

The two met, became a couple, and Jessica started calling John her penguin, referring to the way that penguins are said to mate for life with the male penguin actually “proposing” by giving the female a stone to seal the deal.

Then one day, on a trip the two took to an aquarium, John made it official, proposing to Jessica in front of the penguin exhibit. John was excited for the day he could walk down the aisle with his bride, and eagerly immersed himself in grueling physical therapy, learning to use prosthetic arms and legs.

Meanwhile, as John learned how to use prosthetic limbs and how to live his life independently, doctors approached him with another option. How would he feel about a double arm transplant? It would mean relearning everything about how to care for himself that he’d just worked so hard to learn. It would also mean that one day, John could hold the hand of the woman he loved.

John had all but given up when he finally got the call he knew would change his life forever. In August 2016, after two long years waiting for a donor, John became the second wounded veteran to receive a double arm transplant. 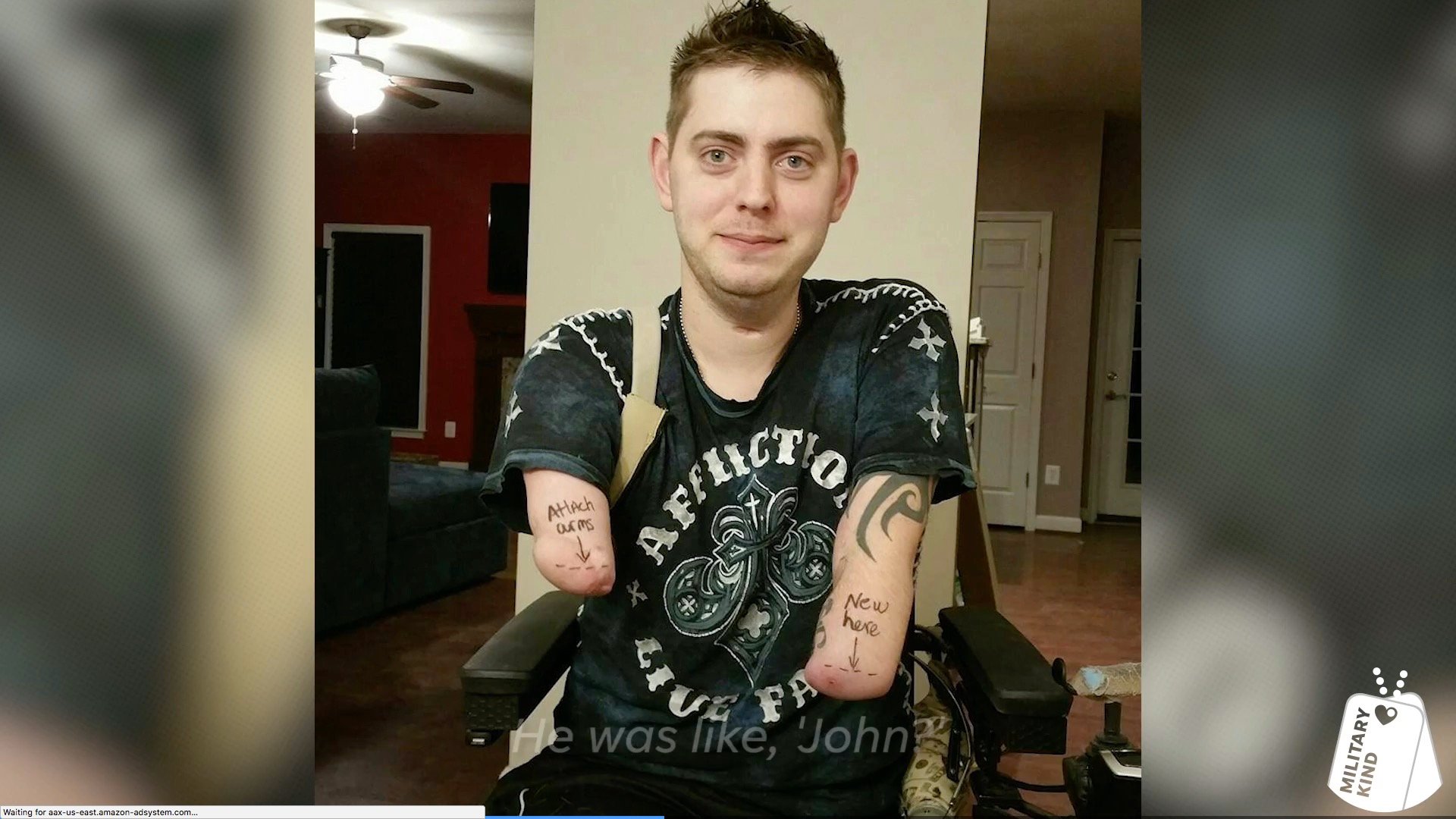 As he quickly prepared to go to the hospital for the operation, John was overjoyed until it hit home that if he was receiving this transplant, it meant that someone else was dying. "I felt terrible," he said.

Less than 24 hours later, John was in tears on the operating table at Brigham and Women’s Hospital in Boston. After waking from the difficult 13-hour surgery, the pain was so overwhelming that he initially wanted to ask the doctors to remove the arms. But then he thought about his donor, and how he didn’t want to waste the precious gift he had been given.

"Your loved one's death will not be for nothing," John shared at a press conference. "Every day that I look down at our new arms, I will drive on . . . and I will never give up. I will remember his selflessness and his gift until the day I die." said John.

John endured infections and hospitalization following a bad reaction after his double arm transplant. But he did not give up hope. And then one day, a wiggle proved that everything was starting to turn around. He was able to move his fingers! First, just a little bit, and then the wiggle became more pronounced. John started to be able to see a future where his dreams could become a reality!

"I'm just grateful that I'm going to have this opportunity to be able to hold [Jessica’s] hand…to possibly be able to fulfill my dreams, my lifelong dream," John said.

Throughout this entire ordeal, John has not given up on a dream he has kept alive for a decade — he wants to become a renowned chef. For now, John works with a nonprofit organization called Operation Green Zone, making menus for food trucks that he hopes will be run by veterans.

But eventually, John has a bigger goal in mind for his culinary skills.

"I am going to compete on next ‘Food Network Star.' I'm going to win it. And then I'm going to open up a restaurant," John exclaimed.

John showed thousands just how far he’s come and how much closer to that goal he is when he made the first pitch at a Rockland Boulders baseball game in August 2018. The crowd cheered as this wounded warrior used his new arms to toss the ball.

But it’s perhaps the more private accomplishment that really hits home. . . when this veteran was able to pen a love note to his wife for the first time. “Jess,” he wrote. “Penguin loves you.”

John, we’ll all be praying for your continued progress, and we’ll be keeping an eye on Food Network for your debut!

WATCH: Marine Vet with Double Arm Transplant Is An Inspiration

YOU MAY LIKE: D-Day Veteran Will Marry His Former Fiancee 70 Years After They Split