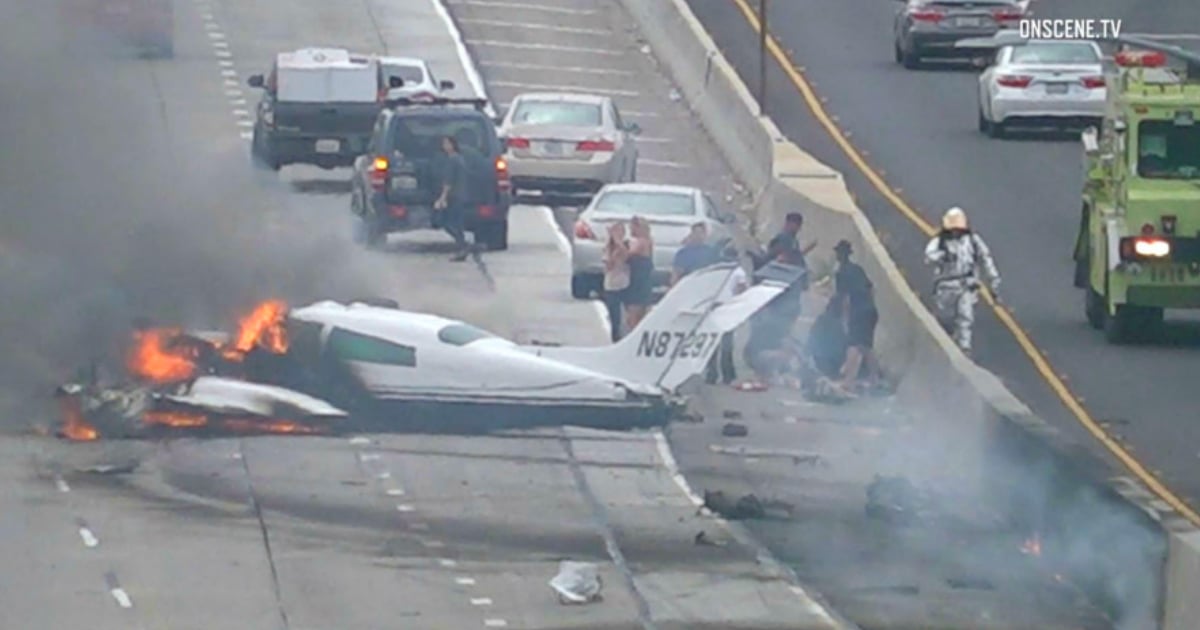 Plane Crashed On Freeway, Then Burst Into Flames With Pilot Trapped Inside
Read Article »

When Courtney and Cameron Larson started fertility treatments, they were hoping for twins. God blessed them with quadruplets. But the journey wasn’t an easy one. Born at just 25 weeks, the micro-preemie quadruplets faced major health battles. And as these quadruplets now head into Kindergarten, their survival is nothing short of a miracle!

Courtney always wanted to be a mom. After marrying her college sweetheart, the couple prayed and prayed for a baby. Sadly, though, doctors found out Courtney suffered from polycystic ovary syndrome, a condition keeping her from becoming pregnant naturally. So, the couple turned to medical treatments, including intrauterine insemination.

RELATED: Couple Faces Infertility For 11 Years, Then Has 4th Of July Quadruplets

The price tag was hefty but well worth it in the couple’s opinion in order to start a family. Still, because of all of the difficulty and expense that went along with the procedure, they hoped for twins. But God had bigger plans – quadruplets! 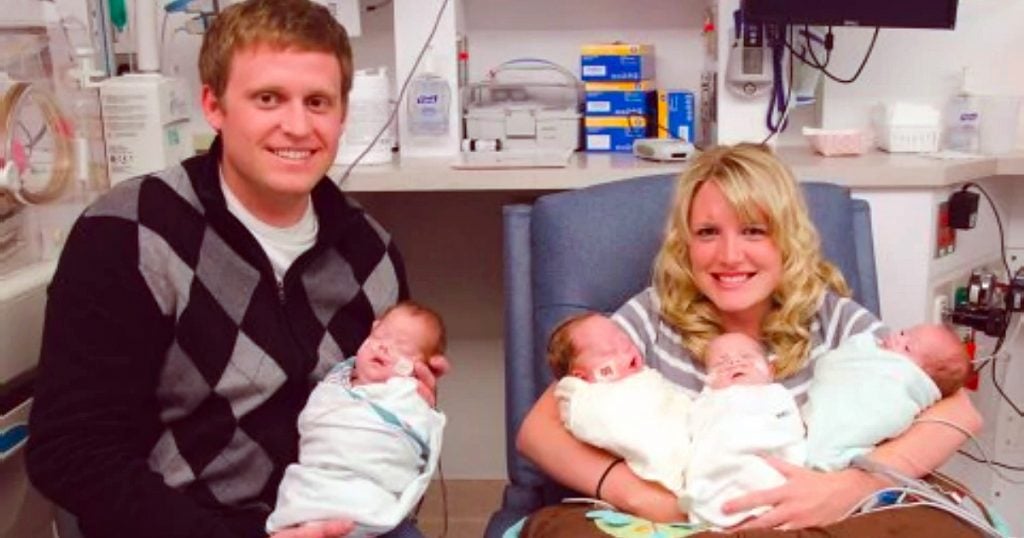 Babies born before 26 weeks are considered "micro-preemies." Unfortunately, micro-preemies face many challenges. Their survival rate is improving but is still at 72%. And survival without "moderate to severe neurodevelopmental impairment" is only 43%. And in the Larson’s case, the survival rate for all four babies in a set of micro-preemie quadruplets is even lower.

Courtney gave birth to two boys and two girls: Cooper, Brody, Ashlyn, and Kylie. Their weight ranged from 1 pound 15 ounces for Brody to 1 pound 5 ounces for Kylie, and all four babies were born with a hole in their heart.

It was a scary time. The micro-preemie quadruplets spent between 121 and 137 days at the neonatal intensive care unit in Rochester, NY before heading home. Brody and Ashlyn underwent surgery at just 2 weeks old to close the holes in their hearts. Kylie had her surgery at 10 weeks old. Cooper waited until he was four to have his hole closed nonsurgically via a catheter through his leg.

Doctors didn’t know if the babies would survive. But God is good. Each one of the micro-preemies pulled through!

Even after the micro-preemie quadruplets headed home, there were still plenty of health struggles, from feeding tubes to surgery complications. Poor Brody even had major bleeding in his brain. Doctors warned that if it continued, cerebral palsy and other developmental problems would likely occur.

But God saw each of the babies through their struggles. In fact, Brody’s bleeding completely resolved itself without any medical intervention. Courtney said their survival is “nothing short of miraculous.” 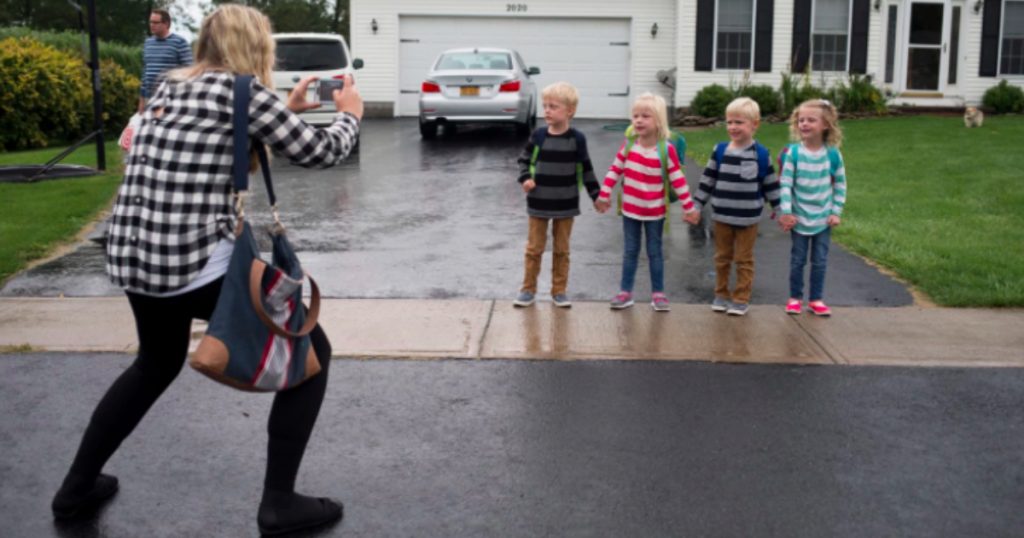 Pictured: Courtney snaps a photo as the grown-up micro-preemie quadruplets get ready to head to Kindergarten, a huge achievement considering their rough start to life Photo Credit: Jackie Molloy

Now 5 years old, the grown-up micro-preemie quadruplets head into Kindergarten. It’s always a big milestone for families. But for Courtney and Cameron, who weren’t sure they’d see all four of their beloved children make it this far, it’s a huge celebration and testament to God’s faithfulness.

While the quadruplets still have scars and some complications from their rough start, thankfully they have no memories of the surgeries and pain they experienced as babies. For the most part, they are happy, healthy children and physicians assure the family the quadruplets are going to be pretty normal. 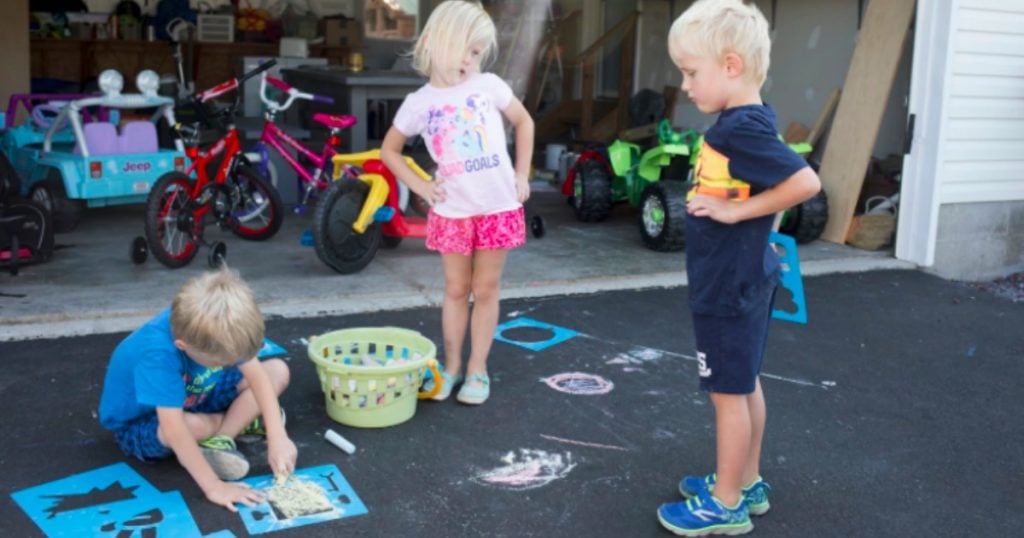 The faith-filled family captured the attention of photographer Jackie Molloy in 2014. At the time, Jackie was a student in a photojournalism class and a friend introduced her to the Larsons. She began photographing the family as a part of a college assignment. But soon it became clear it was no coincidence their paths crossed.

As Jackie visited to take pictures, she formed a close bond with the whole family. In fact, she suffers from the same polycystic ovary syndrome as Courtney. For Jackie, who fears she won’t be able to have children, Courtney is a great source of inspiration.

And so, Jackie continued documenting the family’s lives even after her class assignment ended. She named the photo series “Love and Chaos” and hopes to continue until the quadruplets are 18 years old.

"Family is the root of my passion for storytelling," Jackie explained. "The [Larson] piece has a lot of themes throughout it, from fertility to raising multiples and what that looks like, as well as religion."

Through her “Love and Chaos” photo series, Jackie aims to document what life with quadruplets is really like.

As Jackie’s title suggests, life in the Larson household can certainly get chaotic. But it’s also filled with so much joy! 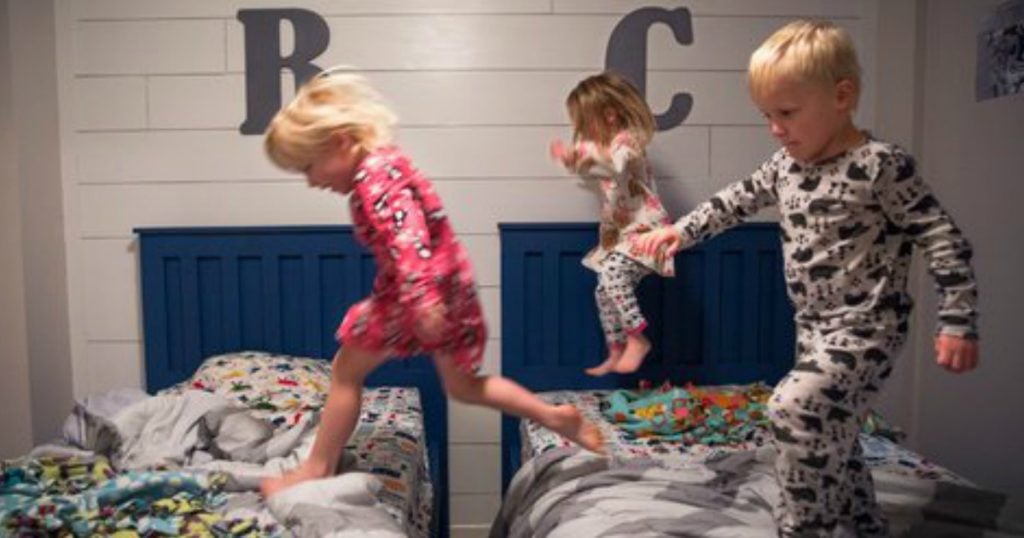 With Courtney and Cameron outnumbered by an army of little ones, Jackie often marvels at how smoothly the house runs. She’s in awe of Courtney’s “ability to hold everything together.”

"She's a wonderful mom," Jackie said, "and I expected to find a superhero costume hiding in a closet somewhere. Cameron is a loving and involved dad."

It’s the deep vein of love and commitment that runs through this family that has kept Jackie coming back to take more and more photos. 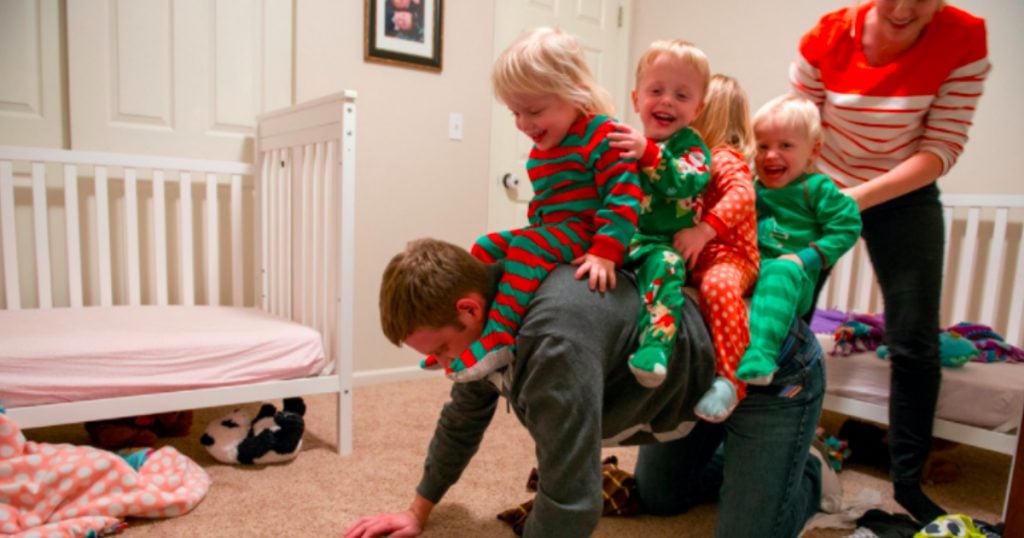 Here, the couple is enjoying some horsing around time in 2014.

With the quadruplets consuming so much of their time, Courtney and Cameron don’t get a whole lot of time together as a couple.

"You definitely have to put more effort into spending time together; to plan time to get a babysitter you have to really plan it out," Courtney said. "It's not as simple as, ‘Let's just go out and see a movie.' " 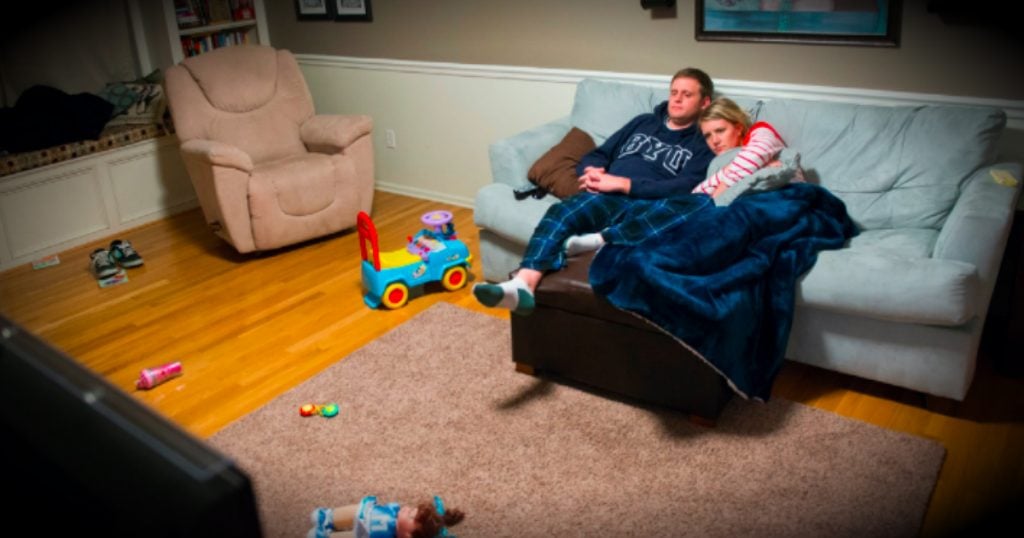 So, they soak in the quiet moments together when they can.

And God clearly had a purpose for bringing Jackie into the Larson’s lives. She’s not just documenting the precious moments shared by this beautiful family. 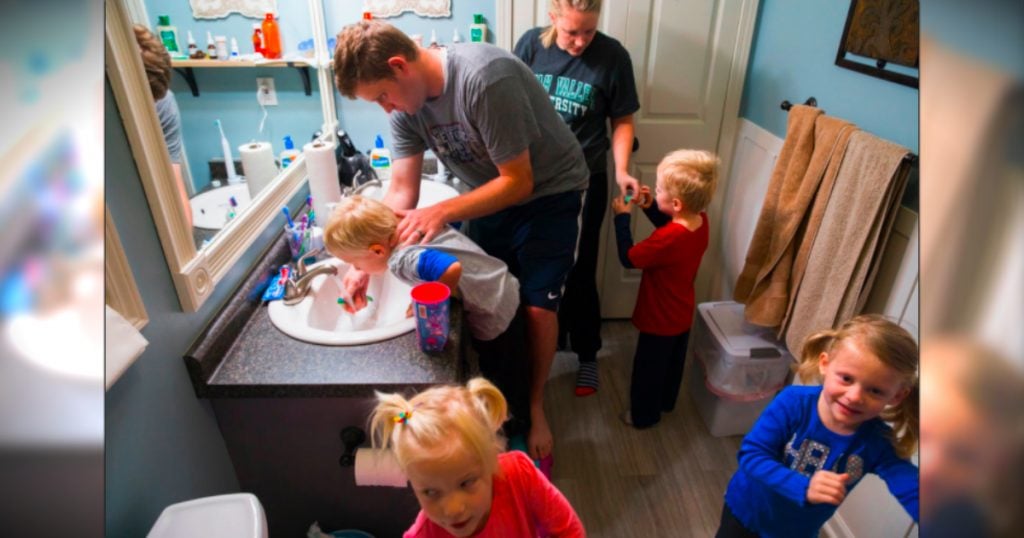 She’s witnessing the beauty of God’s heart at work. She’s there to see how He’s working to restore these four miracles, as well as how this faithful family honors Him first.

YOU MAY ALSO LIKE: 1 In 15 Million Identical Quadruplets Return To Hospital More Than A Year Later

“Children are a heritage from the Lord, offspring a reward from him. Like arrows in the hands of a warrior are children born in one's youth. Blessed is the man whose quiver is full of them. They will not be put to shame when they contend with their opponents in court.” Psalm 127:3-5