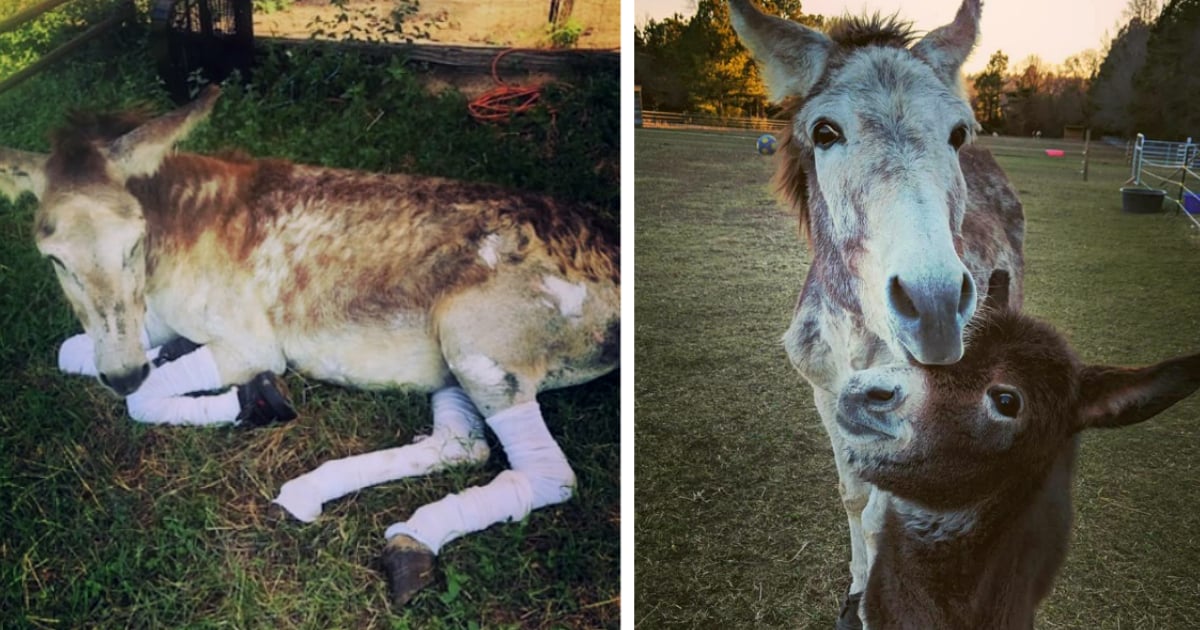 Miracle dog Moose may be missing part of his brain, but his human Jennifer Osborne loves him just the way he is. Here’s the inspirational short story behind his crooked smile that has the Internet swooning!

God certainly brought Jennifer Osborne and her miracle dog Moose together for a reason. She discovered Moose in 2016 at a pet store when he was just 3 months old.

RELATED: Special Needs Kitten Named Voldemort Born With No Nose Is Inspiring So Many

At the time, they didn’t realize the Australian Cattle Dog (also called a Blue Heeler) had any problems. But when Moose hit 6 months, Jennifer started realizing something was different about her fur-baby.

“Shortly after we got Moose an MRI showed that Moose had no forehead, no sinuses, missing parts of his brain, particularly the part that helps him smell, and a cyst in his brain where the deformity is,” she explained. “The front of his brain is squished together too.”

Even though this meant Moose would have special needs for his entire life, Jennifer didn’t care. And clearly, that’s a big reason God brought the two together.

“I'm thankful I got him rather than someone who would have abandoned him or put him down. We believe Moose was born this way,” Jennifer said.

Jennifer gladly accepted the extra care and attention her special dog Moose would need. She sees Moose as a gift, not a burden.

“With everything that's happened to Moose, we're very lucky he survived, period,” Jennifer said. “He is literally a miracle.”

“We know that Moose's nose was pushed into his skull which caused the under-bite, crooked nose, deformed skull, deformed brain, and eye issues – probably when he was still in the womb,” Jennifer Osborne explains.

But his loving human loves Moose just the way he is. And she’s willing to put in the extra time, care, and money to meet the miracle dog’s special needs.

RELATED: Abused Pup Left With Only Half A Face Still Has A Heart Full Of Love

There are some downsides that come with Moose missing part of his brain. By the time he turned 2, Moose started having seizures.

“Only the front area of his brain is affected and his seizures will likely get worse,” Jennifer says. “But his neurologist doesn't believe it'll shorten his life.”

Moose takes medicine, which helps keep the grand mal seizures away. But he still has partial seizures which can last hours.

“They affect the body and the brain and left his whole body twitching and him foaming at the mouth. At his worst, he had three in 30 hours,” Jennifer said.

He also suffers from seasonal allergies and a condition called cherry eye that makes the tear ducts in one of his eyes protrude from the eyelid.

Still, despite all of this, miracle dog Moose is a ray of joy for Jennifer and all who now follow him on social media.

“By the way Moose acts you wouldn't think his brain had any issues. He is extremely intelligent, has so much personality, and loves everyone especially his mama,” Jennifer said.

Jennifer started sharing Moose’s inspirational story on Instagram, along with plenty of photos of this eternally cheerful pup. And in no time, Moose’s sweet smile took the Internet by storm!

While Moose’s deformities make him different from other dogs, those differences are also what make him so unique and adorable!

The underbite on miracle dog Moose makes it look as though he is always smiling. But Jennifer says Moose’s sunny disposition isn’t just for show. His cheerful demeanor is just part of how God made him.

“He is amazing and a blessing on my life,” she says. “He is the happiest dog I have ever met and I'm thankful he's my dog.”

Thousands of people follow the miracle dog Moose on Instagram. There, Jennifer posts plenty of photos of Moose dressed up or just donning his heart-melting grin.

Jennifer Osborne also created a line of miracle dog Moose products, from T-shirts to coffee mugs, to help cover some of the hefty medical bills that come with owning a special needs dog.

YOU MAY ALSO LIKE: Warning From Veterinarians To Keep Dogs Out Of Toxic Algae Water

Folks comment frequently on how much Moose has brightened their day. And this sweet boy is showing the whole world that there’s nothing wrong with being different!