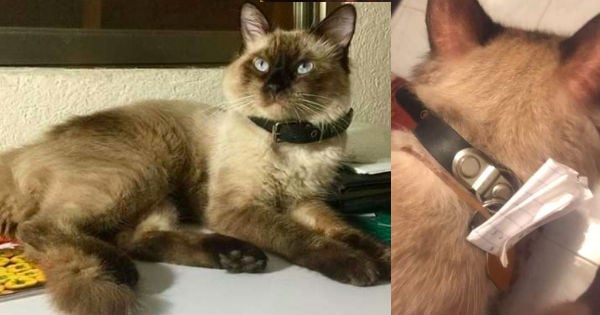 After a missing African grey parrot is found, one New Yorker breathes a sigh of relief when her beloved pet is reunited with her.

Lenah Alshowaiman is a Ph.D. candidate at Columbia University, and she owns an African grey parrot named Zoya. Zoya is 2 years old and is a very intelligent bird who can mimic human sounds. Zoya will say "good morning" to Lenah when she wakes up and even says "peace out" when Lenah leaves her apartment!

RELATED: Cat Living A Double Life Returns Home With Note Attached To Collar Explaining It All

"I've always wanted a bird instead of a dog or a cat," Lenah shares. "Our relationship is about communication."

Recently, Lenah took Zoya outside with her to go on a walk at a nearby park. Usually, Zoya is attached to her harness, but this time, Lenah allowed Zoya to roam free on the grass. While they were at the park, an ambulance with sirens on zoomed by and scared Zoya.

"She freaked out and flew directly into the trees," Lenah explains. "I screamed and ran after her crying."

Lenah searched the park to find Zoya for hours. She did the same thing the very next day but had no luck. She posted alerts on social media and put up hundreds of posters all around town with Zoya's information on it.

"[Knowing] this was my fault killed me. I felt devastated and hopeless," Lenah says. But Zoya is not afraid of strangers and I thought she might land on someone's shoulder when she wanted food."

The next day, a woman named Liz Franco found Zoya perched on her windowsill. "One of my sons said, "There's a bird on our windowsill' so I ran out and saw a beautiful grey parrot," she explains. And once she saw the identification band on the bird's foot, she figured the parrot was someone's pet.

After searching around on social media and finding a post about a missing African grey parrot, Liz called the owner's number that was listed.

"I appreciated that Liz asked me to read the numbers on Zoya's band to verify I was the owner," Lenah says. "That Zoya landed in a nice household made me burst into tears."

YOU MAY ALSO LIKE: Jeanne Robertson Catches Granddaughter on TikTok And Her Reaction Is Priceless

Lenah and Zoya were able to have a wonderful reunion after all!