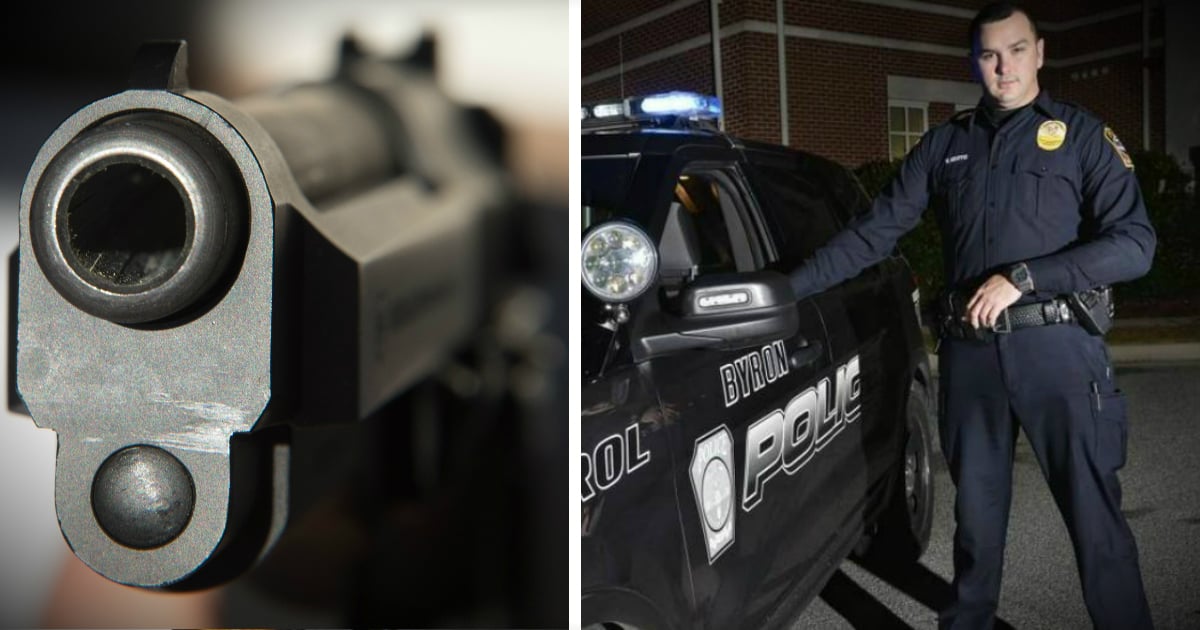 Kayla Gayton couldn’t shake the feeling something was seriously wrong, even though doctors told her otherwise. After a year of misdiagnosis, the amazing mom delivered quadruplets while battling cancer. And a year later, God answered her prayers!

What Kayla Gaytan has endured is pretty unbelievable. And yet, the humble mom doesn’t consider herself all that interesting.

"I mean, I'm a 30-year-old woman who just happens to have quadruplets and 2 other kids and who happened to have cancer 3 times in the last two years," she laughs.

But we think Kayla’s courage is downright incredible. To call her journey difficult is an understatement. Yet, she never lost faith. And her amazing journey is truly inspiring!

Kayla, her soldier husband Charles, and their two kids were stationed at Fort Campbell, Kentucky when things got crazy. Kayla kept visiting doctors for a persistent itch, but they kept misdiagnosing the problem. It took more than a year to figure out what was causing the itch — Hodgkin’s lymphoma. But by then, things had gotten pretty bad.

Just after turning 29, an x-ray revealed tumors filling a third of Kayla’s chest cavity, along with enlarged lymph nodes. She endured several months of "gruesome" chemotherapy and finally received wonderful news — she was in remission!

But that wasn’t all. Kayla also found out she was pregnant with spontaneous quadruplets!

"It was more than a complete shock, but also such a blessing," Kayla recalls. 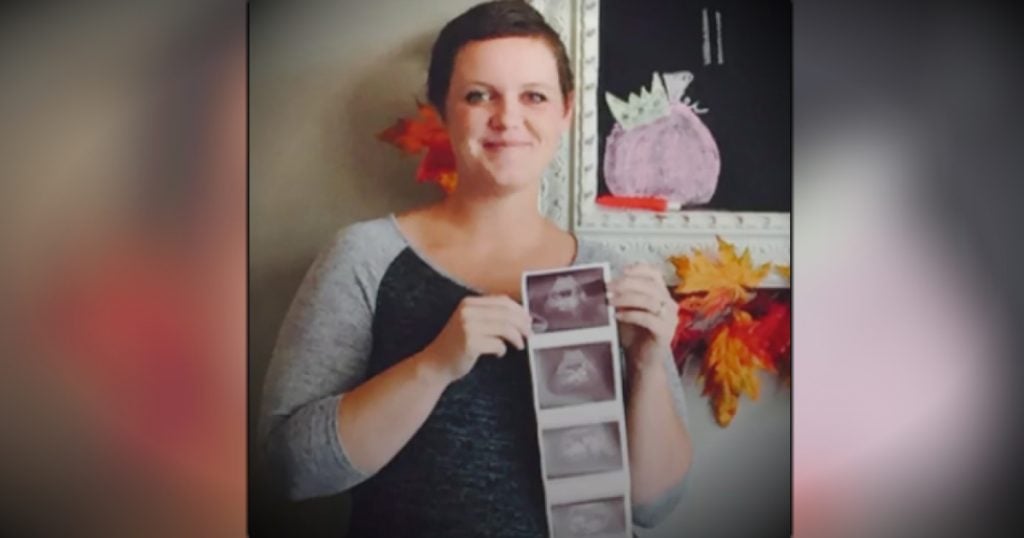 With no help from fertility drugs, this is an extremely rare occurrence. Kayla and her husband were over the moon!

"There were four healthy heartbeats. It's truly a miracle," she said.

Thankfully, the pregnancy went smoothly. But unfortunately for Kayla, 6 months in, her cancer came back, testing her faith.

"You think you've beat it the first time. When it comes back, you're just wondering why get pregnant with these four babies and then, you know, something like this happens," Kayla said tearfully.

RELATED: Pregnant mom of 5 refused chemo to save her baby

Not wanting to do anything to jeopardize her babies, Kayla refused to start chemo again until after she delivered. Her goal was to make it to 34 weeks. But as her symptoms got worse, she was forced to make a tough choice.

"My body was telling me that I needed to start treatment sooner, so we ended up taking (the babies) out at 30 weeks," Kayla said.

God is good, and the brave mom delivered quadruplets while battling cancer. 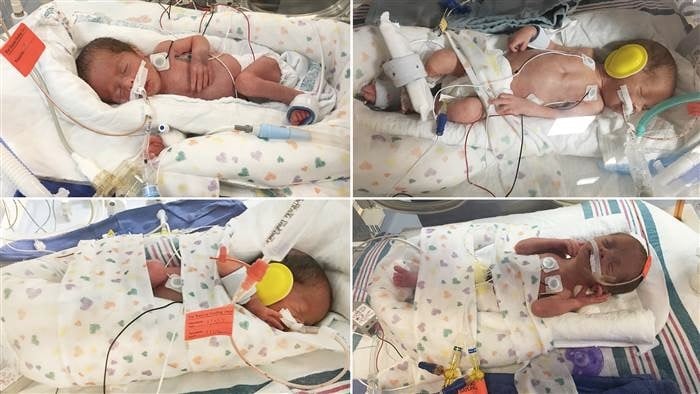 The four tiny miracles ranged in weight from 2 pounds, 8 ounces, up to 3 pounds, 2 ounces. They remained in the NICU for a while but all of the babies were all healthy. Now, the attention turned to saving Kayla. And Michael, Victoria, Charles, and Lillian gave her even more motivation to fight!

Fighting For Life And Praying For A Miracle

After this mom delivered quadruplets while battling cancer, it was a blessing to have them here, safe and sound. Now, as she faced seemingly impossible odds, Kayla leaned on her faith to see her through. The courageous warrior faced the daunting future with an incredible outlook.

"I'm a very stubborn person. I believe that's part of what has gotten me this far," Kayla said. "My advice to other moms, or anyone really facing cancer or any other challenges in life, is to just have faith. Even when it's tested, continue to believe that things will work themselves out."

Scans revealed tumors in Kayla’s chest, armpit, and neck area. She underwent chemo, followed by a stem cell transplant, followed by more chemo. All while raising quadruplets and 2 other children!

But the family remained faithful, and a long, tiresome year later, God answered their prayers. Doctors confirmed Kayla was once again in remission!

"I broke down, and I was beyond excited," her husband, Sgt. Charles Gaytan said. "This is the life God planned for me and I'm more than excited to live every moment that I've had so far." 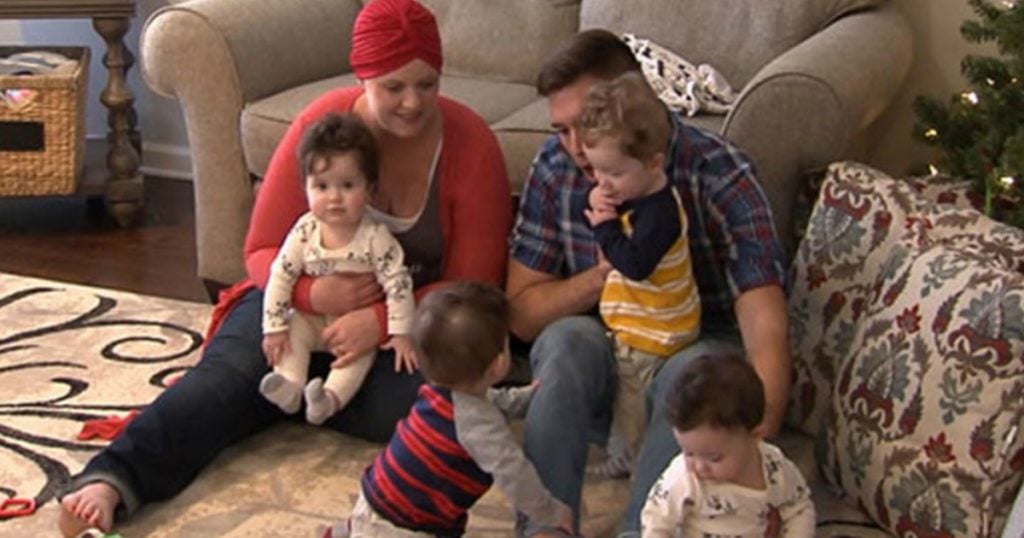 Raising quadruplets is exhausting enough by itself. To do so with two other children and while undergoing cancer treatment is unfathomable. So, despite all the bad, Kayla finds the blessings. Which is exactly what makes her such an inspiration!

"This process has taught me so much about myself and how strong I am like as a mom and as a wife and as a person in general, and has shown me honestly, what I can do," Kayla said.

Please join us in praying for Kayla and her precious family.

“Your ways, God, are holy. What god is as great as our God? You are the God who performs miracles; you display your power among the peoples.” Psalms 77:13-14