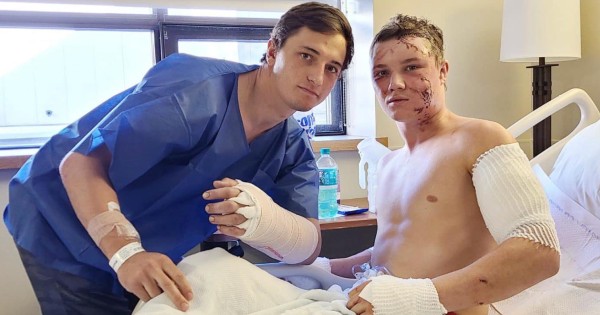 Johnny Lauder swam half a mile in treacherous conditions to perform a mom rescue. What a devoted son!

86-year-old Karen Lauder has seen more than her fair share of hurricanes. And she assumed it would be mild compared to the ones she already lived through until she found herself in deep trouble.

RELATED: Elderly Man's Car Flooded With Water And A Group Of Good Samaritans Raced To Save Him

Disabled Mom Is In Danger

Johnny describes his mom as strong, stubborn, and tough as nails. But she was no match for Hurricane Ian, which recently obliterated Florida with raging flood waters and 155 mph winds. Despite Karen's family pleading with her to evacuate her home, she refused. She wanted to stay in the comfort of her own home. But as the flood waters began to rise, she knew she needed to get help considering the fact she is wheelchair-bound and has one leg.

RELATED: 8-Year-Old Prays From The Roof During Flood And His Miraculous Story Is Inspiring Thousands

As a former police officer, Johnny is no stranger to crisis situations. But the moment his mother called to be rescued, he felt the pressure to get her to safety. Once he got his kids to safety in his son's home, he dove into his mission to rescue his mother.

“Once the stormwater started coming in, and it was about three and a half, four feet of water on the side of my son’s house, that’s when I knew that time was of the essence, and I made sure they were safe and dry,” he said. “They went up in an attic crawl space with a way to get out of the roof if need be, and I jumped out the window and started making my trek to help mom.”

When he finally got to Karen's house, he found her floating in dark, murky water up to her shoulders. He then began the trek to safety and got his mother to a hospital. Not only did he save his mother, but he and his son also rescued another woman, too.

When we lay down our lives for someone, we are often considered to be the hands and feet of Jesus–modern-day heroes. Because he waded through the storm and rescued his mother and another woman, a Go-Fund-Me page was set for him and his mom when the public learned they had lost both of their homes. It's an incredible way the world is saying ‘thank you' to this courageous son to the tune of $24,000 so far.

If you are going through a storm right now, let this be an encouragement to you. God is with you in the storms, and he will be your rescuer.

YOU MAY ALSO LIKE: Son Begs Police To Help Father First As They're Found Clinging To A Cooler In Boston Harbor

"Sing praises to the  Lord, O you his saints, and  give thanks to his holy name. For his anger is but for a moment, and his favor is for a lifetime. Weeping may tarry for the night, but  joy comes with the morning," Psalm 30:4-5.